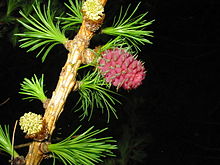 Two male and one female European larch cones during the flowering period.

All larch species are deciduous trees , so they shed their needle-shaped leaves in late autumn . This makes them one of the two not evergreen genera within the pine family. The other genus is that of the golden larch , which does not belong to the larch. There are 10 to 60 needle leaves on a short shoot or the needle leaves are individually on annual long shoots. The bark is silver-gray to gray-brown on young trees; it later turns reddish brown to brown.

The European larch ( Larix decidua ) reaches heights of growth of around 40 meters, American Larix species are even a little higher. The seedlings have (four to eight cotyledons cotyledons ).

Larix species are single sexed ( monoecious ), so they have male and female cones on a tree. The individually standing male cones are egg-shaped to cylindrical, yellowish and usually smaller than 1 centimeter. The female cones are initially green, red or purple in color. They need four to seven months from fertilization to maturity, but remain on the tree for several years even after the seeds have been scattered. The egg-shaped to spherical cones stand upright at the end on short shoots or on a short, curved, leafy stem on the branch. When ripe they are light to dark brown. The seed scales are usually a little wider than they are long. The cover scales are smooth and thin. The small seeds are whitish and 4 to 6 millimeters in size with 6 to 9 millimeter wings.

Undoubtedly the oldest find is the Shigir idol carved from a larch , which was recovered from 4 meters depth of the Shigir Moors in the Transural and was dendrochronologically dated to around 11,000 years. The once over 5 meters tall idol is astonishingly reminiscent of wooden idols that z. B. were also found in Northern Europe. It is exhibited in the Sverdlovsk Regional Museum of Yekaterinburg.

The genus Larix was established in 1754 by Philip Miller .

Depending on the author to 10-20 Larix - types distinguished. In particular, there are different views on many of the subspecies often listed under Larix gmelinii .

In the past, the length of the cones was often used to divide the genus Larix into two sections (section Larix with short, section Multiserialis with long cover scales). However, the first genetic analyzes (Gernandt 1999) do not prove this. Rather, these indicate a genetic separation between the Eurasian and American species; accordingly, the size of the cones and cover scales is only to be regarded as an adaptation to climatic environmental conditions.

Species and varieties with their distribution

Habit of Larix × czekanowskii in the habitat

The following hybrids of larch species are known (selection):

European larch ( Larix decidua ) after timber advertising in the forest

Larch wood is mainly used as construction and furniture wood, much less often it is used as firewood. The European larch, the Siberian larch in Eurasia and the East American and West American larch in North America are of particular economic interest. In addition, there are other species of lesser or regional importance, including the Japanese larch from the Japanese island of Honshū, which is partly grown in Europe, as well as the hybrid larch ( Larix eurolepis ) grown from the European and Japanese larch .

Larch wood is the heaviest and hardest wood of the European coniferous timber and is only surpassed by the rarely used yew . It is mainly used as construction timber for roof structures, wall and ceiling constructions, in interior construction for almost all wood uses, including stairs, railings, wall cladding, doors, parquet and plank floors as well as outside for house doors, garage doors, windows, facade cladding, frames and parapets as well used for large cladding. In addition, there are many special uses due to the special properties of larch wood in earthworks, hydraulic engineering and bridge construction, in boat building and for numerous other applications.

The energetic use of larch wood plays a comparatively minor role. Larch wood has a calorific value of 4.4 kWh / kg or 1,700 kWh / rm and is therefore comparable to pine and Douglas fir . Like most types of wood, it is mainly used in private house fires in the form of split logs . Industrial waste ( wood chips ) and the like are used as wood pellets . a. also offered from larch wood production in the form of mixed pellets.