The common juniper ( Juniperus communis ), also heather juniper (common names : Machandelbaum, Kranewittbaum, Reckholder, Weihrauchbaum, Feuerbaum), is a plant species that belongs to the genus juniper from the family of the cypress family (Cupressaceae).

On Christmas days, twigs were tied over the stable doors to keep druids and witches away. The common juniper, which is also used medicinally, was the tree of the year 2002. 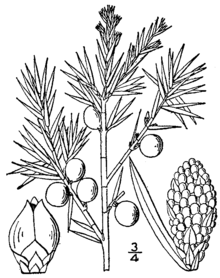 Male flowers of the heather juniper

Cut through a juniper trunk

The common juniper grows as an upright to creeping shrub or small tree that reaches heights of up to 12 meters, up to a maximum of 18.5 meters and a trunk diameter of 0.9 meters and forms a deep root system. It can live up to 600 years. The trunk has a gray to reddish brown bark . The juniper usually forms a narrow, conical to oval crown. The needle-shaped leaves are attached to the branch with a hinge. The needles, arranged in threes in whorls , are piercingly pointed and 1 to 2 centimeters long. Their top has light stomatal strips and wax strips.

The common juniper is dioecious separately sexed ( dioecious ), rarely monoecious ( monoecious ). Male specimens can be recognized by their yellowish flowers during the flowering period from April to June. The cones have a stem and are created in autumn. Female cones consist of three cone scales. Each seed scale has only one ovule . The ovules are only accessible from above. The seed scales later grow together with the cover scales and become fleshy. It takes 3 years to develop into a ripe berry-shaped cone. In the first year after pollination the cone is still green, in the third year it finally becomes black-brown, bluish frosted (wax layer). The woody seeds are 4 to 5 mm in size with a bone-hard shell.

Unlike most other conifers, it forms only two cotyledons ( cotyledons off).

The chromosome number of the species is 2n = 22.

The heather juniper has a ringed bark. The needles are sharply pointed (protection against eating, condensation point for rainwater, adaptation to drought). He is deep-rooted with root fungus .

He is windblown of the "immobile type". The pollen is blown out of the cover scales. A micropylar droplet is used for pollination , which catches the pollen that is spread by the wind. Two to three months pass between pollination and fertilization . It takes 1 year to form an embryo. The seeds ripen in the winter of the 2nd year.

Flowering time is from April to May.

The common juniper is the most widespread conifers, at least if you include the subspecies or varieties . The distribution area of ​​the common juniper extends in the biogeographical region of the Holarctic from North America through South Greenland, North Africa, Europe, the Middle East, North Asia and Central Asia to East Asia. It can even be found in the northernmost outskirts of South Asia and, with its seven varieties, colonizes habitats up to 4,050 m.

Compared to other woody plants, the common juniper is very weak in competition, so that it is displaced to dry, sandy, stony locations or bog areas. In open spaces, on sandy soils or dry pastures, however, the common juniper can be very dominant. The populations in Germany are mostly secondary to pasture use, since the juniper is not bitten by cattle (for example Lüneburg Heath or Swabian Alb ), if one follows the argumentation of the so-called mega herbivore hypothesis , however, this simulates natural processes.

You can find the heather juniper quite often on sunny poor pastures, on rocks and in sparse forests. It prefers dry, mostly base-rich, often calcareous soils. He is a light plant. 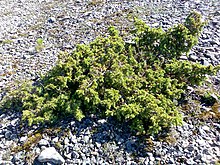 The common juniper ( Juniperus communis ) is listed within the genus Juniperus in the Juniperus section of the same name . Sometimes the section is referred to as a subgenus. With regard to the determination of the species / subspecies or variety properties, scientific discussions are still in part ongoing. Here the views of RP Adams are essentially followed, who distinguishes seven varieties including the nominate form:

According to Euro + Med, three subspecies can be distinguished:

Juniperus communis is listed on the Red List of Threatened Species by the International Union for Conservation of Nature ( IUCN ), but is designated as “Least Concern”.

With the Fauna-Flora-Habitat Directive No. 92/43 / EEC in the updated version of January 1, 2007 of the European Union (FFH-RL) Appendix 1, protected area designations are required for the following habitat types to which juniper species belong:

Importance as a fodder plant (selection)

The caterpillars of the following butterfly species depend on the plant as a food source.

Several varieties have been bred for use as ornamental plants, some of which are listed below:

The common juniper is a heartwood tree . The relatively wide sapwood has a light yellowish color. The heartwood is reddish brown in color. The mean bulk density is 0.55 g / cm³. The wood is highly weather-resistant and gives off a pleasant scent. Since it is usually only available in small dimensions, it is used for the production of small furniture, for turning and carving.

Ripe berry-shaped cones on the branch

Juniper branches (and sometimes berries) are traditionally used in Scandinavia to flavor and preserve beer.

The common juniper is considered to be slightly poisonous, it is irritating to the skin.

Unripe fruits contain up to 2.9% essential oil of a different composition. There also seem to be significant differences between the oils from annual and triennial fruits.

Pharmacological effect: In the event of an overdose, the kidneys are irritated. Berries and Juniperus preparations must not be taken during pregnancy, as they have antifertile properties.

In addition to kidney pain, there may also be an urge to urinate, an increase in diuresis, a violet odor in the urine, an accelerated heart rate and breathing, and rarely cramps.

According to the information from the poisoning advice center, Berlin could experience slight gastroenteritic symptoms when taking in fruits and needles.

Effects on the skin / mucous membrane: External exposure can cause inflammation of the skin with blistering. In one case, allergic contact eczema and allergic asthma due to occupational handling of juniper berry oil were observed.

The various Juniperus species produce large amounts of pollen , which, however, are of minor importance from an allergological point of view.

There is also a risk of mixing up or contaminating juniper berries with those of the highly poisonous Sade tree ( Juniperus sabina ). In the past, for example, juniper berries contaminated with sad tree berries were repeatedly used to flavor gin , which is why juniper berries, at least in Spain, are regularly examined by the state.

Active ingredients are: In the berry cones: essential oil with terpinen-4-ol as the main component, plus pinene , sabinene , myrcene and other monoterpenes , sesquiterpenes such as caryiophylls ; Flavonoids , catechin tannins, invert sugar .

The juniper oil ( Oleum iuniperi ) is derived from juniper (from the vile juniper) by distillation essential oil.

Applications: Juniper berries and their essential oil have a diuretic effect. They are used for flushing therapy for infections of the lower urinary tract, especially in folk medicine for rheumatic diseases and as a "blood cleansing and degreasing agent".

The use of juniper berries as a purge agent is documented as early as the Middle Ages and from 1350 on in German-language texts.

For internal pharmaceutical use, it is therefore requested that oils be preferred which are rich in the terpene alcohol terpinen-4-ol and at the same time low in pinene, which irritates the kidneys, in order to minimize the risk.

For self-medication, it is currently only recommended to use it, limited to a few weeks, for digestive problems with slight cramps in the gastrointestinal area, for a feeling of fullness, belching and heartburn. Chewing some berries is said to get rid of bad breath.

Due to its skin-irritating properties, the essential oil is also used in rubs and bath additives against rheumatic complaints.

Attention: Juniper preparations are contraindicated in kidney disease and during pregnancy !

Distribution in the northern hemisphere: