The biogeographical regions of Europe

The Biogeographie ( Biogeography ) is a research field of biology and also the geography . It combines aspects of both sciences and acts as an intermediary between bioecology and geoecology . It deals with the current distribution, geological development and the environmental relationships of the animal and plant taxa as well as the distribution and spatial patterns of populations , communities and biomes . A modern orientation that integrates findings from molecular biology , phylogenetics and paleontology with spread scenarios of genetic lines or higher taxa is phylogeography .

Biogeography as a geographical science

Biogeography as a geographical science sees living beings as geofactors ( flora and fauna ), elements of landscapes and bioindicators to characterize the earth's spaces and the structures that exist there.

Biogeography can be divided into two sub-disciplines:

In addition, biogeography is closely related to geobiology (see geobotany , geozoology ), a sub-discipline of biology . The areas of expertise of both sciences are very similar. They differ by a different object of knowledge . 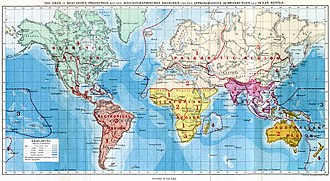 Zoogeographical Regions according to Wallace , 1876

A distinction is made between the following zoogeographical regions or fauna provinces: 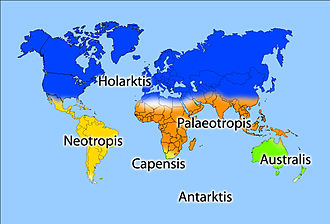 The division into floral kingdoms often corresponds to the division into zoogeographical regions. In some areas, however, there are also significant deviations. For example, a special Cape region is delimited in the south of Africa, whereas sub-Saharan Africa is combined with the southern regions of Asia to form the Paleotropic and Eurasia (excluding South Asia) is combined with North America to form the Holarctic. There are six continental and one oceanic flora kingdom:

The zonal models of biogeography

When viewed globally, numerous zonal models can be derived from the results of biogeography. Depending on the orientation and author, they are given names such as " vegetation zones ", " zonobiome ", " eco zones ", "natural landscape zones ", "landscape belts", "geo-ecological zones", "bio zones" and a few more. Their more or less strong relation to the climate zone models is obvious.

The first thoughts with biogeographical features existed in the 17th century, when Bible scholars and naturalists discussed the repopulation of the earth after the flood . It was possible to explain for the first time that animals, which require a wide variety of climatic conditions, would have found their current habitat starting from one point - Mount Ararat .

Alexander von Humboldt is considered the founder of vegetation geography with his work Ideas for a Geography of Plants (Tübingen, 1807). He described the vegetation as a defining feature of the "gestalt character" of the various regions of the earth and began with a physiognomic view of the plants.

August Grisebach then coined the term “plant geographic formation” as “a group of plants that has a self-contained physiognomic character, such as a meadow, a forest, etc.”.

As a result of the pioneering work of Humboldt, the vegetation research direction developed from around 1830 , represented by Oswald Heer , Franz Unger , Otto Sendtner and others.

The most important work on fauna for a long time comes from Alfred Russel Wallace , who had it published in 1876 under the title The Geographical Distribution of Animals . It shows the division of the world into fauna regions, which is valid into the 21st century, and which are also based on the results of Philip Lutley Sclater . It was not until the end of 2012 that a team from the Center for Macroecology, Evolution and Climate (CMEC) at the University of Copenhagen, led by Ben Holt and Jean-Philippe Lessard, published a modern study that added essential aspects to Wallace's work.

Directions of work in biogeography

General Biogeography deals with theoretical principles and method development. It is divided into the following areas:

The area is the habitat of a species. The site customer (chorology) the study of the geographic distribution of organisms and individual species and systematic clans. It focuses on the representation, comparative and ecological analysis of the distribution of animal and plant species. Area diagnosis is available as a working method . Because plants make particularly clear space allocations due to their limited mobility, especially that is Flore analysis developed.

The palaeobiogeography deals with the causes of the development and distribution of animals and plants. When working methods which are radiocarbon dating (also C14 method called), the pollen analysis and dendrochronology available.

In island biogeography , both theoretical aspects (equilibrium theory of biodiversity) and evolutionary aspects play a role. There are references to nature conservation via the concept of the biotope network and the planning of protected areas.

The special biogeography addresses on the one hand certain regions of the earth and on the other hand the distribution patterns of specific groups of species (plant geography, animal geography), communities (vegetation geography) or ecosystems. The aim is to characterize the coverage and distribution of these units as comprehensively as possible.

In applied biogeography, knowledge of general and special biogeography is put into practice. Examples are water zoning, bioindication, forest planning or designation of protected areas.

Biogeography has close relationships with

Animal and plant ecology deals with the relationship between animals and plants and the interactions between living beings and their habitat. When working methods that are site analysis , ecosystem modeling, the material balance and the biomonitoring available.

The Biogeography Working Group brings together scientists across Germany who work on various biogeographical topics.