Fritz Schwerdtfeger (born March 5, 1905 in Cologne , † August 4, 1986 in Göttingen ) was a German forest scientist . The internationally recognized forest zoologist emerged primarily with entomological work. He achieved great fame with his enormously influential standard work Die Waldkrankheiten. A textbook on forest pathology and forest protection (first in 1944), which for the first time presented the events in the "sick" forest in its entirety. In addition, Schwerdtfeger was one of the founders of the field of population ecology as a branch of ecology .

Fritz Schwerdtfeger studied forest sciences and zoology in Hann from 1924 to 1928 . Münden , Göttingen and in his hometown Cologne . He completed his forestry studies with a doctorate under Ludwig Rhumbler (1864–1939) at the Institute for Forest Zoology of the Forest Faculty in Hann. Mouth off.

As a trainee lawyer in the Colbitz forestry department , he came into contact with special forest tomological issues when he was commissioned by the Prussian state forest administration to study the epidemiology of the pine moth and to look for suitable control options for this butterfly species. In 1930 he passed the Great State Examination in Forestry . 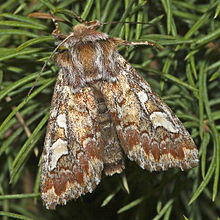 Schwerdtfeger published two large studies in 1932 and 1935 on the forl or pine owl ( Panolis flammea Schiff).

This was followed by three years as an assistant at the Forest Zoology Institute in Hann, headed by Hermann Eidmann . Munden, for which he focused in 1932 and 1933 with a spacious Forleulen - calamity employed in central and eastern Prussia.

At the end of 1933, he was again directly subordinate to the Prussian State Forest Administration, which commissioned him to set up and manage a new department for pest control at the Prussian Forest Research Institute at the Werbellinsee near Eberswalde . In 1937 it became the research institute's own institute for forest protection and in 1938 it moved into a new building on today's Alfred-Möller-Straße in Eberswalde. The institute director Schwerdtfeger raised 75 percent of the money for the construction - 120,000 Reichsmarks - himself. In parallel to these activities, after completing his habilitation in 1935 , he began teaching in the fields of forest zoology and forest protection at the Forestry University in Eberswalde . In 1938 he was appointed associate professor there.

From 1941 on he headed the Forest Protection Institute in Eberswalde again and, initially as a substitute, then from 1943 as a full professor at the Zoological Institute and the Zoological Museum of the Forestry University. He had taken over the chair of zoology from the retired Max Wolff . The work soon suffered greatly from the effects of the war. After an interlude at the Volkssturm , Schwerdtfeger finally fled west. An attempt to return to his old place of work immediately after the end of the war was unsuccessful.

But already in the summer of 1945 Schwerdtfeger was employed by the then Hanoverian provincial government as a so-called “ bark beetle commissioner” to help fight the local bark beetle calamity as an expert in the Harz Mountains . For this purpose, the “Prof. Schwerdtfeger Forest Protection Center” was set up for him in Sieber . The mass multiplication of bark beetles had already begun in the last years of the war, favored by warm summers and lack of labor in the forest. Most of the time, the infected wood could only be felled - in Central Europe around 30 million cubic meters of beetle wood was produced in this way by 1950 .

From the "Forest Protection Office Professor Schwerdtfeger" In 1949, the department "Forest Pest Control" (later "Forest protection") which was founded in the same year and Reinhard Schober led Lower Saxony Forest Research Institute (NFV) in Göttingen. Schwerdtfeger took over its management, which he held until his retirement in 1970. In 1953, when Department B, Forest Protection, moved from Sieber to Göttingen, Fritz Schwerdtfeger was appointed chief forest manager. Since 1954, he has also given lectures on population ecology for biology students at the Faculty of Mathematics and Natural Sciences at the Georg-August University in Göttingen . Since 1965 he has been a member of the forestry faculty with a personal professorial position and the title of "full professor em.".

A few weeks after he had cleared his study in the research institute, Chief Forester Fritz Schwerdtfeger died on August 4, 1986 in Göttingen.

During his nearly 60-year research has Schwerdtfeger intensively with numerous forest insects, including bordered white , Forleule , pine moth , beetle , Big Brown weevil , pine conservation pamphiliidae , oak leaf , Sitkalaus and Buchenwollschildlaus and different bark beetle species. He not only provided important information on the biology and behavior of these insects, but also on the prognosis of possible harmful mass occurrences and their control. Schwerdtfeger's scientific rise came at a time when applied entomology was in full bloom. With his high scientific performance and organizational skills, he has actively and very successfully contributed to this development.

Schwerdtfeger was an extraordinarily versatile and fruitful forest writer. He wrote more than 700 scientific papers, which he published in various forest and entomological journals. His publications often had a direct impact on practice or were written specifically for it, such as the smaller manual Instructions for Test Visits for Pine Insects in the Ground Cover (1937), which was widely used. However, Schwerdtfeger has also written a number of important books, especially Die Waldkrankheiten (1944), in which events in the “sick” forest were recorded and considered in their entirety for the first time. Especially with the 2nd edition from 1957, the book took on the form that was familiar to all German foresters in the second half of the 20th century. Thanks to its clear and concise presentation, it immediately developed into the standard work for forestry studies and practice. In 1981 the 4th and so far last edition of the textbook on forest pathology and forest protection appeared.

Schwerdtfeger's other major work is the three-volume ecology of animals (1963–1975), with which he worked far beyond the forestry department. The forest entomologist had already become a co-founder of the subject of population ecology, which deals with the development and interrelationships of animal populations, through his research in the 1930s. In his Ecology of Animals , Schwerdtfeger not only brought a wealth of details, but also put them together to create a conceptual structure. In doing so, he consistently created a conceptual order and introduced uniform terminology in German. 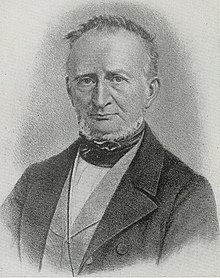 Schwerdtfeger published a biography in 1983 about his role model Julius Theodor Christian Ratzeburg , the "father of the forest entomologist" .

His last scientific work, Julius Theodor Christian Ratzeburg (1801 - 1871). The father of forest entomology, pioneer of applied entomology (1983), was a reminiscence of the founder of the subject forest entomology . Schwerdtfeger had always regarded Ratzeburg as his role model, which is why this biography was particularly important to him . In 1985 he himself took stock of his scientific life under the simple title Conclusion .

In addition, Schwerdtfeger was an honorary member of the Forestry Society of Finland, the Finnish Entomological Society, the British Ecological Society and the Society for Ecology .