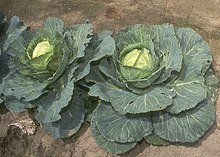 The cabbage ( Brassica oleracea convar. Capitata var. Alba ), also white cabbage , white cabbage , Kappes , capes , Kappus , cabbage , Kobi or herb called, is a variant of the head cabbage and vegetables that has season especially in autumn and winter. It can be used to make hearty stews , cabbage cakes, cabbage rolls or salads. It is characterized by its high proportion of vitamin C (46 mg / 100 g) and mustard oil glycosides with an antibiotic effect .

The name cabbage comes from the Latin caul (is) . The word "Kappes", which is particularly common in the Rhineland and the Ruhr area, was also derived from the Latin caput , the head, from the form caputium . The word also got into English as cabbage via the French caboche . In German-speaking Switzerland the variant "Kabis" or dialect "Chabis" is common, in South Tyrol "Kobis". For Bavaria see the article Gabisgarten .

Many types of white cabbage have heads that are significantly larger than those of red cabbage . Varieties that are early to market are usually marketed as head cabbage. The later market-ready and often large-volume varieties are largely processed into sauerkraut .

Breeding goals are in particular and depending on the intended use, space resistance with simultaneous compactness, short inner cones, storability, disease and pest resistance and the elimination of genetically determined defects such as internal necrosis, which are called "tobacco".

The most commonly grown varieties are round-headed, which makes them easier to machine. Flat head species such as Amager can also be found in the north. The aromatic pointed cabbage and Filderkraut are also grown in southern Germany .

The wettability of the leaf surface is poor. Water rolls off in droplets, as can also be observed with lotus flowers , and it takes dirt particles adhering to the surface with it ( lotus effect ).

Jaroma cabbage is an old type of cabbage that has been bred again. Compared to white cabbage, it is not round, but rather flat and has a milder taste.

An early illustration of the white cabbage can be found in Leonhart Fuchs (1542). In order to increase the yield of white cabbage, CMS varieties (F1 hybrids) are mostly grown today .

In sauerkraut and white cabbage, ascorbic acid is also bound in the form of ascorbents A and B (C-2-scatyl-L-ascorbic acid). When the vegetables are cooked, the molecules break down into L-ascorbic acid and 3-hydroxyindole, so that they can contain more vitamin C when cooked than when raw. However, cooking too long will destroy the vitamin .

Fresh white cabbage juice is used in folk medicine for gastric and duodenal ulcers. Knowledge of the effectiveness is so far insufficient. Sauerkraut juice can also be used for digestive problems.

With a predominant diet with cabbage (as was common, for example, in times of need), increased enlargements of the thyroid gland were observed. The glucosinolates contained in white cabbage are responsible for this because their breakdown products inhibit iodide absorption.

The term " Krauts " was used in British and US-American as ethnophaulism , especially in the world wars for the Germans.