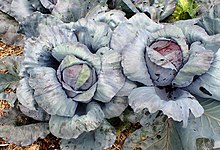 The red cabbage grows into a round head of cabbage with the individual leaves lying close together. The leaf color is in the red to blue range due to the colorants it contains, depending on the nature of the soil and preparation, which is reflected in the different names of the vegetables (see below) .

The red cabbage needs well-fertilized soil and sufficient moisture. It is a typical winter vegetable , sown or planted in spring and harvested in late autumn. Early varieties only account for 10%. Red cabbage is easy to store. Breeding goals are above all burst resistance with simultaneous compactness, short inner cones, high anthocyanin content , disease and pest resistance as well as the elimination of genetic defects (internal necrosis, so-called tobacco).

Red cabbage belongs to the type of cabbage vegetable and has been cultivated for a long time. Its firm heads are characterized by their red-green outer and smooth, red inner leaves. Red cabbage is rich in minerals such as iron , ascorbic acid (vitamin C) and the anthocyanins responsible for the coloring , secondary plant substances, which are said to strengthen the immune system and have an anti-inflammatory effect. There are also significant amounts of sugars and mustard oils . Depending on the cooking method , red cabbage has a comparatively low physiological calorific value of approx. 200–240 kJ / 100 g and contains a lot of fiber . Cooking for too long partially destroys the vitamins it contains, so it is particularly advantageous to prepare red cabbage as raw vegetables in winter.

The freshness can be recognized by the strong, firm and glossy leaves. Red cabbage is almost always fresh on offer, with early cabbage from May to June, mid-early cabbage from July to October and late varieties from November to December.

Red cabbage can be kept for up to 14 days in the refrigerator-vegetable drawer; if cut, it should always be wrapped in household foil. Freed from bracts and the rhizome, it can be stored well in a cool, airy cellar on thatched boards. Healthy heads can also be hung there with the bracts on the stems .

Red cabbage is eaten raw (e.g. as a salad) or cooked as a vegetable . Apples are often added to salads as well as to cooking . Typical spices used in red cabbage are cloves , nutmeg and bay leaves .

In many northern German (but also Baden) cooking recipes, acidic ingredients such as vinegar and wine are used. In some regions of Germany (e.g. in Swabia, Franconia and Bavaria ), on the other hand, sugar or even alkaline ingredients such as baking soda are used more often .

Red cabbage is often served as an accompaniment to pork , goose , duck or sauerbraten as well as game .

The red cabbage has a color that is between red and blue depending on the nature of the soil and how it is prepared (see below) . An acidic environment makes the leaves appear more reddish, while alkaline conditions tend to lead to blue tones. In the Middle Ages, there was no term for this intermediate tone. “ Lila ” - a word of Arabic origin - has only been known to the German language since the 18th century, there were only the full tone adjectives “blue” and “red”. In the German regions the decisions for red cabbage were different. The German-speaking area was primarily familiar with the cabbage in the south and cabbage in the north . The following terms are common:

The German-speaking area around 1900 is taken into account, which is largely identical to today's in terms of regional variants. However, due to the effects of the media, for example, there is a mix-up in the language regions, in this case in particular in favor of “red cabbage”. 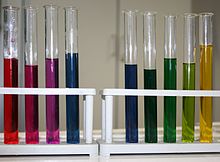 Colors in blue cabbage juice, acidic on the left, alkaline on the right

The anthocyanins are responsible for the color of the leaves, which together produce a red to blue color depending on the pH value. The main component is an acylated sambicyanine -5-glucoside (or chrysanthemine -5-sambubioside).

The red cabbage juice that is produced during cooking or pressing also has a coloration that depends on the pH value ( acid-base indicator ) due to the cyanidine glycosides it contains .