In 1835 Ludwig Clamor Marquart first gave the name Anthokyan to a chemical compound that gives flowers a blue color. In 1849, FS Morot was able to isolate this dye, known as “cyanine”, in impure form. In 1913 Richard Willstätter succeeded in identifying the anthocyanin of the cornflower. This term was later introduced to denote a whole group of compounds that are chemically similar to the original "flower blue". It was also quickly recognized that the crystallization of the oxonium dye salts (flavylium salts) was considerably easier than the precipitation of the neutral (quinoid) dyes.

Anthocyanins belong to the group of the flavone -like substances, the flavonoids , and to the secondary plant substances counted.

They owe their good solubility in water to a glycosidically bound sugar content. Color Decisive is only the sugar- free portion, the aglycone of anthocyanin, which therefore anthocyanidin is called. Most and most important anthocyanins are derived from cyanidin and delphinidin .

Anthocyanins are chymochromic dyes that can only be found in the cell sap of land plants , but not in animals , microorganisms or aquatic plants . In aquatic plants, the photosynthesis turnover is not sufficient for production due to the low light intensity under water. But not all land plants contain anthocyanins: in the carnation-like , cacti and Mollugo plants , betalaine take on the role of anthocyanins. 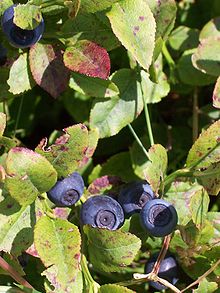 Anthocyanins occur in almost all higher plants, mostly in the flowers and fruits , but also in the leaves and roots. In the respective parts of the plant, they can be found primarily in the outer cell layers such as the epidermal cells . The quantities found there are relatively large: One kilogram of blackberries contains around 1.15 grams of anthocyanins, for example, and up to 20 grams per kilogram of peel can be obtained from red and black legumes . Açaí berries, aronia , cherries , blue grapes , blueberries and red cabbage as well as African violets are rich in anthocyanins . Anthocyanins are less common, for example, in bananas, asparagus, peas, fennel, pears and potatoes. The glycosides of pelargonidin , cyanidin , delphinidin and their methyl ethers malvidin , peonidin and petunidin occur most frequently in nature . It is estimated that 2% of the total carbon that is fixed in plants by photosynthesis is converted into flavonoids and their derivatives such as anthocyanins. That is no less than 10 9 tons per year.

In plants, the anthocyanins are found together with other natural coloring substances such as the chemically closely related flavones , the carotenoids , anthoxanthines and betalaines . In addition to these, they are also responsible for the color of the leaves in autumn, when photosynthesis ceases and the chlorophyll is not newly formed.

Even in relatively young plants, in which chlorophyll and wax production has not yet started and which would therefore be unprotected from UV light , anthocyanins are increasingly produced. Parts or even the whole plant are colored and protected with the help of the dyes, which are called youth anthocyanins. When chlorophyll production begins, the production of anthocyanin dyes is reduced. The pattern of anthocyanin formation in plants is specific to the plant species, as it depends on the soil conditions, light, warmth and plant species or variety. It is extremely rare for plants to have only one anthocyanin as a dye, but it does happen nonetheless. The absence or particularly high occurrence of a certain anthocyanin in a plant can be traced back to genetic circumstances.

Plant skins are usually darker in color than the inside of the plant, but exceptions are blood oranges, for example. Plant skins are therefore able to absorb visible light and convert parts of the radiant energy into thermal energy. The anthocyanins have other tasks in plants: They should

The first two points also explain why the anthocyanins are found in the outer layers of the plant parts: Only here can they perform their task. When plants are exposed to strong UV light or ionizing radiation, the plant stimulates anthocyanin production via chemical messengers.

Fundamental structural clarifications in the field of plant dyes were carried out by Willstätter and awarded the Nobel Prize in Chemistry in 1915.

Anthocyanidins always have a p -hydroxyphenyl substituent (B ring) in position 2 and a hydroxyl group in position 3 . In nature, the counterion of benzopyrylium salts is usually carboxylates of various water-soluble acids, and often chloride in laboratory preparations . The most important natural anthocyanidins are hydroxy-substituted in the 5- and 7-position of the A ring.

In the case of glycosides of anthocyanidins, anthocyanins (engl. Anthocyanosides , anthocyanins ), are usually at the hydroxyl group at carbon atom -3 C sugar molecules via an O linked glycosidic bond. These can be, for example, glucose , galactose , arabinose , rhamnose and xylose in various saccharide forms . By acylation with aromatic plants at these acids, the variety of anthocyanins obtained. The glycoside form gives the molecules increased solubility in water, which is important for transport in the plant cells, as well as increased stability.

Anthocyanins are sensitive to light and temperature; at pH values ​​below 3 they are most stable in the form of their flavylium salts. Anthocyanins react with tannins and precipitate from aqueous solutions. Oxidizing agents discolour anthocyanins; they are particularly sensitive in the alkaline range.

Anthocyanins absorb light in the visible range between 450 and 650 nm. The wavelength range is influenced not only by the molecular structure but also by the pH value of the cell sap or the environment and they therefore appear red, violet or blue. Light of these wavelengths is filtered out of the visible light and the reflected light portion appears to us as a color. The color spectrum ranges from blue to red. In the acidic environment, the red color predominates, in the alkaline environment, blue and violet tones are to be found. Changes in color also occur in some plants: the flowers of the lungwort ( Pulmonaria officinalis ) are initially pink, later purple, as the pH value changes over the course of life. The skin of blackberries turns from pink to deep blue as they ripen, while their sweet-sour juice is deep red.

pH-related reactions of the anthocyanidins that cause the color changes.

pH dependence of the color

The color changes of the anthocyanins are based on chemical reactions . The terms “ red cabbage ” and “ blue cabbage” do not mean different types of cabbage, but the only difference between the dishes during preparation is the different addition of vinegar during cooking.

The formation of the anthocyanins follows the biosynthesis of all flavonoids (see: Biosynthesis ). The oligomeric proanthocyanidins are a biological precursor . Chalcone synthase (CHS), the expression of which is regulated at the mRNA level, has been identified as the key enzyme of the anthocyanin synthesis pathway . Various external factors, environmental influences such as temperature, light and water availability, have an influence. But plant stress can also play a role.

In seedlings , for example, the synthesis of the so-called juvenile anthocyanin in the cotyledons and in the hypocotyl is stimulated by the red and blue light components in sunlight, which are registered by the phytochrome (red light) and cryptochrome (blue light) molecules that function as photoreceptors . Adult plants produce anthocyanins in leaves and the shoot, especially when exposed to ultraviolet light, which means stress for the plant. The anthocyanins are probably only the stable end products of the synthesis, but the UV-absorbing precursors are important for protecting the plant.

Even with the foliage in the fall of anthocyanins are formed which make the red color of autumn leaves. The anthocyanides are the end product of the cinnamic acid pathway , which is triggered by the breakdown of phenylalanine . This metabolic pathway is not found in plants that fix nitrogen through symbiosis with bacteria . Therefore, there is no autumn color from anthocyanins.

Basically, anthocyanides in leaves are only ever formed in the outermost layer, the epidermis . In sprout organs, the anthocyanides form in the subepidermis below and in leaf organs especially near the leaf veins and the leaf margin. This local restriction is due to the existence of genetic transcription factors in these areas, which enable the synthesis of anthocyanides in response to certain factors. In this context, one speaks of a competence pattern .

The anthocyanins are obtained by extraction with sulfite-containing water or by chromatographic processes from the components of various plants. The yield is usually greatest with the fruit peels or flowers.

In the EU , anthocyanins are generally approved as food additives under the collective number E  163 without maximum quantity restriction ( quantum satis ) for food. (Glycosides of pelargonidin E 163a, cyanidin E 163b, peonidin E 163c, delphinidin E 163d, petunidin E 163e, malvidin E 163f). They are used as food additives for coloring, for example, fruit jellies, confectionery, sodas, jams, jams, canned fruit, baking agents for fine baked goods, coatings and ice cream. They are usually added to acidic products, as they are only stable in these. Use of some foods would not be permitted anyway, as there would be a risk of deception, such as bread, various dairy products, pasta and honey.

They are not used as dyes in art because of their lack of stability.

During the analysis, it is advantageous to use acids such as formic acid to lower the pH to below 3, since the anthocyanins are most stable under these conditions. Since plants have a specific anthocyanidin / glycoside distribution pattern, HPLC analysis of the ingredients can be used to determine whether, for example, a wine comes from a certain growing area and which grape variety it is. When wines are stored for a longer period of time, anthocyanin polymers are increasingly formed, so the age of a wine can be determined by measuring the so-called monomer index . Polymers of anthocyanins result from oxidative (radical proceeding) couplings of the neutral dominant quinoid compounds.

The anthocyanins from red grape juice and black currant juice are only absorbed by the body to a small extent and / or metabolized quickly , as was concluded from low anthocyanin concentrations both in the blood plasma (pH 7.4) and in the urine . The daily intake varies greatly from person to person, so that average values ​​are hardly meaningful. The bioavailability of anthocyanins is only about 1 percent when consumed with normal food.

Anthocyanins have antioxidant effects that can exceed that of vitamin C and vitamin E , at least in vitro , many times over. However, it is doubted that the anthocyanins can also develop this powerful antioxidant effect in vivo , since their bioavailability is poor. In the human body they bind free radicals and thus protect the DNA as well as lipids and carbohydrates from damage. Other effects are ascribed to the anthocyanins: They are supposed to improve the visual processes, have an anti-inflammatory and vascular protective effect.

Anthocyanins are only toxic to a very low degree. Anthocyanins ingested from plants pose no threat.