The black currant ( Ribes nigrum ), also known as black currant in Austria , is a species of the currant genus . Sometimes the French name cassis is used for their fruits in German-speaking countries . 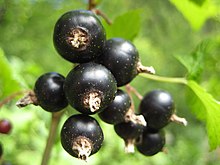 The black currant grows as a one to two meter high, deciduous shrub with up to ten centimeters wide, heart-shaped, three- to five-lobed leaves at their base. These are bald on top, hairy on the underside and covered with sessile yellowish glands. The shrub is thornless and has a strong, sometimes unpleasant odor, which also distinguishes the species from the red currant .

The flowers are arranged in hanging clusters, they are rather inconspicuous. The sepals are elongated, hairy and turned back, the petals are smaller than the sepals, upright and whitish. The flower is overall greenish-yellow in color. In Central Europe , the flowering time of the black currant is in April and May. The fruit is a black berry eight to twelve millimeters in diameter; the seeds are spread by animals.

The black currant occurs in the temperate and boreal zone of Eurasia from England and France in the west to Manchuria in the east. In the north the species is distributed to Lapland , south to Armenia and the Himalayas. In the Allgäu Alps, it rises at the summit of the Rubihorn in Bavaria up to 1930 m above sea level.

The blackcurrant grows wild in alder swamps , damp bushes and alluvial forests , on damp to wet, nutrient-rich, as well as boggy to clayey soils. When feral from gardens, the species also occurs in drier locations. It is a character species of the Carici elongatae-Alnetum from the Alnion association, but also occurs in societies of the Salicion cinereae or Alno-Ulmion associations.

Since natural and overgrown occurrences often cannot be distinguished, the natural distribution in Central Europe can no longer be reconstructed. 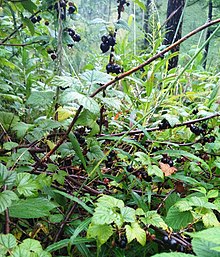 Black currant in the mountains of Zakamensky District Buryatia , Russia

The black currant has been planted as a soft fruit in gardens in Central Europe since the 16th century . Horticultural use probably took place much earlier in north-eastern Europe. In Central Europe, the ripe berries are usually harvested from July to August.

The berries contain water, carbohydrates , fatty acids , proteins and minerals among others

The black currant is usually drunk as nectar and lemonade or used to make jelly or jam . It is the basis of the cassis syrup or the cassis liqueur . In Germany black currants are often used to make a topping . The high concentration of vitamin C contained in the fruit (approx. 180 mg per 100 g berries) is not destroyed or only slightly reduced by heating (unlike other fruits) in the production of juices, jellies or jams.

A blackcurrant flower bud extract is used in the perfumery industry. Small amounts of this extract give perfumes a fruity note.

The fresh leaves can be used as an addition to herb and vegetable soups from April to May. Leaves picked from April to July are also used in their dried form to make tea beverages.

The black currants are of mildew , the synanthedon tipuliformis which Johannisbeergallmilbe and Maulbeerschildlaus affected. In addition, nettle leaves (a virosis) occur much more frequently in black currants than in red currants.