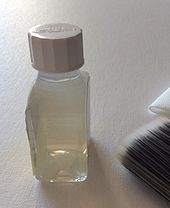 Varnish is a clear paint consisting of a binder dissolved in a solvent . It can be applied as the last layer on a painting for aesthetic reasons or as a protective coating . Depending on the subject and epoch , the term has a slightly different meaning: In painting technology , it describes the paint and binding agent linseed oil varnish , while in painting and painting restoration it is understood to be a transparent coating to protect paintings , especially oil paintings .

In the 18th century was understood varnish all clear coatings, ie both boiled linseed oil and resin solutions ( shellac in alcohol) and Wasserfirnisse ( gum arabic easily in water or hide glue in water), and thus also what today as paint or glaze is called . The term varnish only emerged with the increased use of shellac after 1800, whereby from then on the word varnish was mainly used only for special coatings such as painting varnish, linseed oil varnish or as a synonym for patina .

There are varnishes based on oil, resin, turpentine oil and alcohol . A regional characteristic is varnish made from chia oil , which is particularly valued in Mexican painting. In the 19th century, artists also liked to use lightly tinted varnishes to make new paintings yellow and therefore look older. Hence the modern use of the term patina , which was originally just the Italian term for "varnish".

Also in the black-figure vase painting used clay slip (Glanzton) is known in older literature as a varnish. The paint slip consists of the same material as the vessel and only differs in the particle size; only after the fire does it get its black color.

Varnish (Middle High German also virnīs , Latin vernix ) is derived from the Italian vernice through medieval Latin Veronica (in the 8th century also veronix ), the medium Greek Beronike , pronounced Veronike , probably by Berenice , today Benghazi , a city in the Libyan Cyrenaica . The natural resin sandarak , which was originally used as a varnish, was imported from here. The term came into German through the French word for lacquer , "le vernis", from which the " Vernissage " (opening of an art exhibition) is derived.

The derivation of varnish or vernis (cf. Middle Latin vernisium ) from an alleged proper name "Martin Vernis" is wrong. The term “Vernis Martin” describes all French lacquer work on wood of the 18th century (paneling, carriages, furniture, boxes, etc.). It goes back to the Martin brothers (Guillaume, † 1749; Etienne-Simon, † 1770; Julian, † 1783 and Robert, † 1766). The Martin brothers developed a lacquer which was also known as "Cipolin" and was used to imitate Chinese and Japanese lacquer work . In 1730 (renewed in 1744) Guillaume and Etienne-Simon received the exclusive right to produce "Vernis Martin".

In painting it can happen that the base or the lower layers of paint soak up part of the binding agent of the upper layer of paint , making the upper layer appear matt. By applying an intermediate varnish, the loss of binder can be compensated and the desired degree of gloss can be set. The intermediate varnish should not contain any wax , as this hinders the adhesion of further layers of paint.

The final varnish is applied as the top layer of a picture to protect the paint application and to ensure a uniform gloss effect. If the varnish can be washed off with water or a solvent without affecting the underlying layers of paint, it can be renewed later. A good varnish preserves the painting and allows the colors to develop. It should be highly transparent and not yellow .

The following are used in particular: