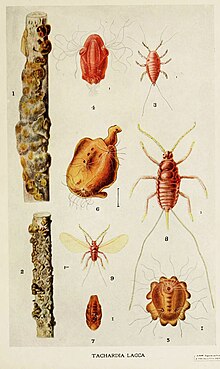 Drawing of the lacquer scale insect and its shellac resin bubbles, by Harold Maxwell-Lefroy

Shellac , table lacquer , flat lacquer or lacca in tabulis , also incorrectly referred to as rubber lacca ( rubber lacquer ) and lacquer resin , is a resinous substance that is obtained from the excretions of the lacquer scale insect Kerria lacca ( plant lice , family Kerridae ) after sucking on certain plants.

Lac was mentioned in early Indian Sanskrit scriptures more than 3000 years ago . In the 5th  Suktha of the 5th book of the Atharvaveda , the occurrence of Lac , the Lac insect and also the use of Lac for medicinal purposes are described under the title "Laksha" . Lac and Laksha are most likely derived from the Sanskrit word laksa or Hindi word Lakh (meaning '100,000') and indicate the large number of scale insects found on trees in India and Thailand that produce this resin. The name fits in with the fact that around 300,000 lice are required per kilogram of paint. The word lacquer and English Lacquer go again on Lac back. As the first European, Jan Huygen van Linschoten , who traveled to India in the Portuguese service , reported on Lac as early as 1596 . The word "shellac" is derived from a composition of the Dutch "schel" shell ; Dandruff and " lacquer " paint off. As early as the 17th century, the East India Company first exported Lac Dye (the pigment laccainic acid contained in Lac ) and later shellac to Europe. Shellac was the first industrially used resin with many important applications in the paints - and varnish -, printing inks -, electrical industry , etc. The most well-known application was the use of shellac as a binding agent in records .

Mainly in South and Southeast Asia, and there especially in India and Thailand , shellac used to be extracted in large quantities. Annual production was around 50,000  tons .

Colonies of lacquer lice parasitize on various trees, mostly poplar fig Ficus religiosa , Ficus indica , and jujube Zizyphus jujuba , Indian jujube Ziziphus mauritia and Malabar lacquer tree Butea frondosa , Kusum tree Schleichera oleosa , rain tree Samanea saman and Croton lacciferus . The females of the lacquer scale insects feed on the sap of these trees, they stab the tree, absorb its sap and excrete the resinous substances through their bodies, the sap is chemically changed in the louse. Each female louse secretes sap to protect the laid eggs. The paint from thousands of lice forms a hard shell over the swarm. The twigs, which are densely populated with tons of such lice, are gradually encrusted up to 1 cm thick and thereby themselves made to die. The old lice, swollen up into a blister filled with red paint, die off; after 6 to 7 months, the young lice hatch out of the shell. After hatching, the branches with the lacquer are harvested; this resin deposit is the starting product for the shellac production. Before the brood lacquer is harvested, some branches inhabited by young aphids are cut off in good time and placed on new trees in order to provide food for the next generation.

Stick lacquer consists for the most part (65–75%) of free and esterified aliphatic and aromatic polyhydroxy acids . The main building blocks are aleuritic acid (up to 32%) and shellolic acid . If only these main components are assumed, the mathematical result is that three to four molecules are linked to one another ( tri- and tetramers ). Since there are several hydroxyl and carboxyl groups in the monomers , three-dimensional networks can form - as is usual in thermosets .

Sources of processing and properties:

The stick lacquer is cleaned and ground and washed with cold water or weak soda solution to remove the water-soluble red dye laccainic acid and then dried as a grain lacquer or lacca in granis , wood particles and sand are also removed in the process; the separated dye is obtained from the washing solution as a lacquer (lac-dye) . The remaining water-insoluble dye erythrolaccin gives the grain varnish its characteristic yellowish-brown inherent color. By melting the granulate together, block varnish is produced. The dried grain varnish still contains very fine impurities. These are sieved out in several stages and result in different degrees of fineness such as the very fine residue Molamma , which would ignite during further processing.

The resin known as earth shellac is obtained from different types of grass trees. With this vegetable origin, red and yellow acaroid resin is fundamentally different from shellac.

For the production of the shellac, the grain lacquer, with the addition of rosin to promote melting, is processed by melting in cotton tubes at about 140 ° C and filtration by wringing out or pressing and pouring onto hot rotating clay or brass cylinders or pisang leaves and drawn out thinly (Handmade Shellac ) . With the customary melt filtration (machinemade shellac) , the granular varnish melted in a tub or over hot tubes is pressed through a filter (sometimes linen cloths) under high pressure. The liquid shellac is pulled into a thin film on a roll-off tape, which breaks when it cools. The natural wax content of 3% to 6% is retained in the shellac during this process.

The residue that arises in the fabric hoses during processing is removed and results in the Kirilac, from which Garnet shellac is produced by solvent extraction . The remaining residue in the fabric of the fabric tubes , Passewa , is melted out and pressed into cake.

Shellac comes in small, thin, angular, tablet-like fragments that are translucent, shiny, hard, with a shell-like break, as shellac on the market. Other forms of trade are created by melting together grain varnish, lump varnish or block varnish Lacca in massis or, in the form of cake, as cake varnish . Another form are round disks with a diameter of approx. 5–8 cm (leaf or button shellac) , which are created by wringing out the cotton sacks and dabbing them on metal sheets.

If the dye-rich stick lacquer is filtered warm with an alcohol solution and the alcohol is distilled off with the addition of rosin to prevent the lacquer from overheating, it forms a blood-red mass which, poured onto sheet metal, results in blood lacquer, ruby shellac or Lacca sanguinea .

The shellacs produced using the solvent extraction process are referred to as wax-free shellacs due to the process and appearance.

In this process, grain varnish is dissolved in alcohol (usually ethanol ). Shellac wax and impurities are removed through various filtration stages before the erythrolaccin pigment remaining in the grain varnish is reduced by the action of activated charcoal . After evaporation and recovery of the alcohol, the liquid shellac is pulled on a roll-off belt to form a film, which breaks when it cools and gives the typical leaf structure. For certain applications in which waxy shellacs are required, the cleaned shellac wax can be added back to the shellac solution before the alcohol evaporates.

Depending on the type of grain varnish used and the degree of discoloration by the activated carbon, very light to dark red wax-free flaky shellacs can be produced. The color number is determined in an alcoholic solution according to Lovibond or Gardner .

Grain varnish is dissolved in an aqueous-alkaline solution, dewaxed, filtered and bleached by the action of sodium hypochlorite (NaOCl). The remaining dyes laccainic acid and erythrolaccin are completely destroyed, so that a clear, almost colorless solution is present. After washing out the sodium hypochlorite, the dissolved shellac is precipitated by adding sulfuric acid ; acetic acid can also be used (acid-free varnish). The white powder obtained in this way is dried as a white, bleached shellac Lacca alba , with a residual moisture of 2 to 6% remaining. For some applications, bleached waxy shellacs are also available.

Due to the complete destruction of the remaining dyes, very dark grain varnishes, for example from Thailand , and Kirilac , the dark residue of the melt filtration process , can also be used as raw materials. Disadvantages are the low storage stability and the change in solubility due to the self-crosslinking of the carboxy groups triggered by the bleaching . The bleached paint is also less hard and elastic.

While there were several shellac manufacturers in Germany with plants in Mainz, Hamburg and Bremen until 1961, which at that time had merged to form Kalkhof GmbH Petersen & Stoever KG , as of 2014 only the production facility of SSB (Stroever Shellac Bremen) is in Bremen as Europe only shellac factory left.

The purely natural granulate is biodegradable and physiologically harmless. The brightness of the color of the paint can be varied by different processing methods. For special applications, the natural wax content of 3 to 6% is almost completely filtered out. The quality of the paint depends on the host species; the best variety is that of Kesambi Schleichera trijuga .

Shellac is very brittle and fragile in the cold and at room temperature, quite hard, odorless and tasteless. It melts when heated and gives off a pleasant odor at higher temperatures. It burns with a brightly shining flame. The melting range is 65 to 85 ° C, the acid number is 60–75 mg / g.

Shellac is insoluble in water, but swells on contact with water and is therefore not waterproof. It is soluble in ethanol (up to, the added wax), borax , ammonia and alkali metal - carbonates , and a mixture of one part of water and ten parts acetone , but not in aqueous acids. This is due to the fact that the molecules of the resin contain carboxylic acids , which are deprotonated to ions in basic solutions . The previously non-polar and hydrophobic organic molecule is characterized polar enough water dissolved to become.

Depending on the type, shellac is colorless, yellow to amber (lemon shellac ), orange to brownish red and takes on a silky sheen when kneaded and drawn off.

Shellac record from Deutsche Grammophon-Aktiengesellschaft: The Harem on the travels by Rudolf Nelson with the Godwin Dance Orchestra

Shellac is a precursor to synthetic resins in numerous applications and has retained its importance in a few areas of application. In the paint and varnish industry, over 5000 tons of shellac-based paints are produced every year. The safety in food and pharmaceuticals should also be emphasized. Shellac can cause allergic skin reactions.

For vegetarians and vegans , foods and other products that contain shellac are unsuitable, because living animals are inevitably involved in shellac production. Shellac is not kosher because it comes from insects and is considered haram by some Muslims .