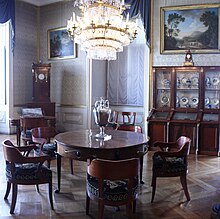 The terms furniture and furnishings (from the Latin mobilis , 'movable') refer to furnishings primarily in interiors such as apartments , shops, offices or other usage units, as well as in outdoor areas (e.g. garden furniture ). The term thus stands in contrast to immovable things ( real estate ) that are firmly connected or grown together with the ground or structures .

A facility is the entirety of the elements that, as functional or design components, help shape architectural or landscape spaces. The furnishing itself is not part of the structural structure (or nature or landscape), but part of the interior or exterior design.

According to the Brothers Grimm's dictionary , the “word […] is taken from the French [oesian] of the 17th century [underts], where it received the sense of household goods that is still valid today, which makes a room cozy or beautifies it ". It was used “as a buzzword, initially in the foreign spelling: meubles”. The term furniture is usually used in the plural, the term furniture in the singular. Both terms are generic terms for a group of furnishings. In addition to furniture, curtains, carpets, house plants, etc. are also part of the facility. In contrast to these elements, however, a piece of furniture is earmarked and primarily serves to store people, animals and objects and, in the broadest sense, to store or pick up objects, for people (or animals) to sit or lie down and as a basis for performing of activities. The division into certain furniture groups is not always clear and can be based on various criteria. Furniture are object-like elements that usually stand in the room as independent, stable bodies. B. differentiate from textile elements of interior design .

In contrast to art objects , the primary value of furniture is its practical value and not its aesthetics . In contrast to machines and tools , they are not used for production . Furniture is heavier and larger compared to other household items and objects that can be carried around easily, but can still be moved with muscle power. A borderline phenomenon is built-in furniture that can no longer be moved due to its fixed connection with the building structure.

Furniture became popular after the Neolithic Revolution . The first evidence of furniture comes from the time of the pharaohs and from finds from Akrotiri (Santorini) from around 1500 BC. A well-developed cabinet maker is known from ancient Egypt. Finds of tables, thrones and loungers from this period show knowledge of turning , veneering , inlaying and painting. Famous pieces come from the tomb of Tutankhamun from the 14th century BC. Ancient Greek houses were furnished with chairs, stools, tables, beds, chests, chests of drawers and couches. The ancient Greeks (from the 8th century BC) also knew the woodturning trade. They used simple mechanical lathes that could be operated with their feet. The most famous antique piece of furniture was used by the Romans : the " Kline ", a kind of bed on which people lay for banquets and normal meals. During the Roman Empire, the upper class owned furniture with silvering, gilding, tortoiseshell inlays and valuable veneers such as citrus.

The cupboard occupies a special position among furniture . Until the end of the Middle Ages , it was hardly widespread, except for storing clothes. Other belongings were z. B. stored on shelves or in chests. Only gradually did the cupboard find its way into other rooms in all social classes.

Secretary with walnut veneer polished. Inlays made of light and dark woods. Theresian , 1750.
See also : List of pieces of furniture

Wilhelminian style - chest of drawers , around 1880

Storage furniture such as the chest or the cupboard are used to store sacred, state or personal items. The chest of drawers developed out of the chest at the end of the 17th century. The secretary is a piece of furniture which, in addition to storing letters and documents, also serves as writing furniture and often also has a representative character.

At a table people drink and eat, work, write, meet or talk. A table like the Guéridon serves as a side table primarily for decorative purposes. Special forms of the table are the desk and others. 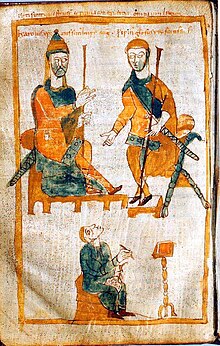 Seating furniture: throne (top left), scissor stool (top right) and a scribe's seat (bottom) in a miniature from the 10th century, after a lost miniature made around 829/836 for Count Eberhard von Friuli .

Carved walnut sofa. Rocailles and flourishes on the frame, the six curved legs and the armrests ending in volutes . Theresian, 1750-1760.

The stool , chair and bench are counted as seating furniture . There are also countless special shapes, such as armchairs , armchairs or sofas .

A seating group ( French: ameublement ) is an ensemble of related seating furniture (e.g. sofa with several armchairs and chairs).

Reclining furniture is used by humans (or animals) to sleep, to relax lying down or to lie down for other reasons. They usually consist of a horizontal or slightly inclined bed surface, which is usually padded. In addition to the bed , this group of furniture also includes loungers , chaise longues , futons, etc. In ancient Rome, for example, it was customary to eat lying down.

Today furniture is primarily manufactured industrially, be it in wood , metal , plastic or cardboard .

Traditionally, furniture is built as individual pieces by carpenters , cabinet makers and carvers .

Norms and standards for design and safety