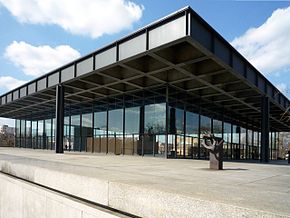 The Neue Nationalgalerie at the Kulturforum is the museum for the art of the 20th century of the Berlin Nationalgalerie . The building of the museum, which opened in 1968, was designed by Ludwig Mies van der Rohe and is considered an icon of classical modernism . The Neue Nationalgalerie has been closed since 2015 due to extensive renovation work. The symbolic handover took place on April 29, 2021, the reopening with a ceremony on August 21, 2021. 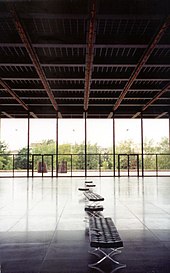 View of the sculpture garden

In 1962, at the age of 76 , Ludwig Mies van der Rohe was commissioned to build the New National Gallery in Berlin. He used his own design from 1957 for the unfinished administration building of the rum manufacturer Bacardi in Santiago de Cuba and his own design for the Georg Schäfer Museum in Schweinfurt , also developed between 1960 and 1963 , which was also never realized. Both designs are based with smaller dimensions on a roof supported on eight pillars and the pillar-free interior. Mies asked his friend Frei Otto for support with the statics of the 1,260 ton roof. Otto replaced the originally planned four central support pillars with two pillars on each side. Construction of the Neue Nationalgalerie began on September 23, 1965, three years after the order was placed, with the laying of the foundation stone and was completed after almost three years of construction in 1968, one year before Mies' death. Mies was in Berlin twice (in 1965 when the foundation stone was laid and in 1967 after the roof construction was put on), but was unable to travel to the opening in 1968 due to a chronic illness. The plans were implemented by his grandson Dirk Lohan, who, after graduating from the TH Munich, worked in his grandfather's office in Chicago from 1962 .

The New National Gallery is the Raw after the only building that Mies van WWII transposed in Germany and the first museum that emerging at that time West Berlin Cultural Forum , near the through the wall intersected Potsdamer Platz was opened. Hans Scharoun's State Library and Philharmonic as well as other museums, including the picture gallery , the applied arts museum , the copper engraving cabinet and the musical instrument museum, are in the immediate vicinity . From 2026 onwards, the ensemble will be supplemented by the Museum of the 20th Century .

With the Neue Nationalgalerie, Mies realized the idea of ​​universal space he had developed. The square pavilion as a steel / glass construction is set up on a 105 × 110 meter granite terrace, which balances the slight slope on the bank of the Landwehr Canal. The square roof that dominates the building is 64.8 meters long; the surrounding glass walls are set back 7.2 meters on all sides and thus form the main hall. During construction, the roof was lifted as an overall element from the assembly height on the base platform with 24 synchronously controlled jacks over the eight steel supports in nine hours and placed there on two supports on each of the four sides. The space below forms the large, column-free main hall, which now allows any exhibition design and is structured axially symmetrically by two free-standing, room-high supply cores (heating / ventilation / roof drainage), two lower built-in cloakrooms and two stairs to the basement. This main hall is intended for the temporary exhibitions. In the basement there are rooms for the permanent exhibition of the collection; On the west side of the building, these rooms are adjoined by a walled sculpture garden , which can also be viewed from the higher-lying plinth platform that extends around the hall on the ground floor.

With its latent classicism, Mies' solution is a modern visualization of the ancient podium temple, which corresponds to the Berlin building tradition shaped by Karl Friedrich Schinkel and his school ( Altes Museum , Alte Nationalgalerie ).

Due to the unusual room layout in the basement and the monumentality of the main hall, the parallel as well as the separate use of the two floors of the building for exhibitions is not always unproblematic for reasons of accessibility. In the recent past, the great hall has employed a number of artists to deal with the uniqueness of Mies' universal space by means of installations and interventions.

The Neue Nationalgalerie houses the holdings of the Staatliche Museen zu Berlin in the field of painting , sculpture and sculpture of the 20th century, from classical modernism to art of the 1960s. It expressly ties in with the tradition of the New Department in the Kronprinzenpalais , which was built under the direction of Ludwig Justi from 1919 to 1937 until it was destroyed by the Degenerate Art campaign .

In 1945 the Berlin magistrate decided to found a 20th century collection. The driving forces behind this were Adolf Jannasch and again Ludwig Justi. But it was not until 1947 that the buying committee came together. It consisted of a city councilor each from the CDU, the SPD and the SED, three art historians and three artists. The now 69-year-old Justi had been appointed General Director of the former State Museums . He initially wanted to fill the gaps in the area of Expressionism by purchasing some major works, but this collided with trends that wanted to document current post-war art. At that time, exhibitions took place in the State Council Chamber of the City Palace.

All further efforts became obsolete with the split of the magistrate in November 1948 and the establishment of the two German states in 1949. That is why the Galerie des 20. Century was founded a second time as a municipal gallery in West Berlin in 1949 and had to build up its inventory again. As before, she saw herself in the tradition of the Kronprinzenpalais and tried, in order to make the continuity visible, to buy back lost works whenever possible - which only succeeded in isolated cases, as with Nolde's Christ and the Samaritan Woman. In particular, the gap created by the loss of the Blue Rider's works could not be adequately closed in the long term.

The gallery's exhibition location was initially the former Landwehr casino on Jebensstrasse behind the Zoo train station , where the art library was also located and now houses the Museum of Photography and the Helmut Newton Foundation. In 1953, the holdings of the Nationalgalerie that had been relocated to the west also returned to West Berlin and were initially exhibited in Dahlem , and from 1959 in Charlottenburg Palace. Both institutions tried in parallel to close the gaps in the area of ​​classical modernism. After the Prussian Cultural Heritage Foundation was established in 1957 , it became easier to coordinate the Nationalgalerie's acquisition policy more closely with that of the 20th century municipal gallery, and when it became clear with the construction of the Wall in 1961 that the holdings from the East and the West would no longer be possible in the long term, it was decided to unite the two trunk collections and to build the representative new building at the newly founded Kulturforum Berlin , which Mies van der Rohe was commissioned with.

This was inaugurated on September 15, 1968 with a Mondrian exhibition. The first director was Werner Haftmann , who set about showing the public a closed collection from both trunk collections , as he himself said. The gallery of the 20th century and all works of the Nationalgalerie moved into the building first, until 1986, due to a lack of space, the Galerie der Romantik returned to Charlottenburg Palace, so that the permanent exhibition was only now focused on the art of the 20th century . The purchase budget of the Neue Nationalgalerie was rather small from the beginning, at the end of the 1960s it was around 200,000 DM. Many pictures could, however, be acquired with the help of the Deutsche Klassenlotterie Foundation and, from 1977, with the support of the Association of Friends of the Nationalgalerie .

The museum concept and purchase policy were often marked by intense public sympathy. Haftmann succeeded in giving the still rudimentary collection a distinctive contour and placing it in an international context. After 1968 there were nevertheless serious disputes when Haftmann turned against cross-border happenings and installations . In the heated situation, some of the glass panes of the Mies building were smashed and even shot to pieces.

In 1982 the tabloids met the purchase of Barnett Newman's Who’s Afraid of Red, Yellow and Blue IV with loud incomprehension, as a result of which there were death threats against the director Dieter Honisch and a student attacked the work of art and seriously damaged it. Honisch had opened the gallery of American painting, especially color field painting in deliberate contrast to Pop Art , which the Museum Ludwig in Cologne collected.

With the reunification, the New National Gallery also changed its face. It became part of the Nationalgalerie Berlin on Museum Island again and in 1993 the holdings were reorganized. While the Romantic Gallery from Charlottenburg Palace could be easily combined with the old holdings and Classical Modernism recorded a gain, the integration of post-war art from the GDR into that of the West was much more difficult. The new hanging aroused violent opposition and for over a year a so-called German-German picture dispute was fought out, which was mainly driven by the injuries of non-state artists from the GDR and the outrage of the CDU. In the meantime, GDR art is hardly represented any more.

Since the establishment of the Hamburger Bahnhof in 1996 after the donation of the Marx Collection , the Neue Nationalgalerie was a pure presentation of classical modernism until the early 1970s. Beyond that, it only goes with the numerous and often spectacular special exhibitions in the glass pavilion, most of which are also retrospective. From February to September 2004, on the initiative of Peter Raue, works from the New York Museum of Modern Art (MoMA) were exhibited under the slogan Das MoMA in Berlin in the National Gallery. From June to October 2007, the exhibition The Most Beautiful French Come from New York with masterpieces of 19th century French art followed on from this success. The Nationalgalerie's second major preferential acquisition, the Berggruen Museum , complements the New Nationalgalerie's holdings with a collection of classical modern art. In 2008 the Scharf-Gerstenberg Collection expanded the spectrum of the Nationalgalerie to include works of surrealism. In the second half of 2009 the Neue Nationalgalerie showed the private collection of the Pietzsch family under the title Pictures Dreams . These are mostly surrealistic pictures by well-known artists such as Miró and Magritte . With the donation of the Pietzsch Collection, these works of art were added to the Nationalgalerie's collection in 2016. 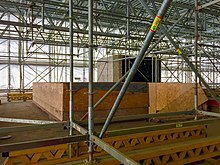 Condition of the hall during the renovation work in 2018

Due to extensive pending renovation work on the New National Gallery, which is under monument protection, it was closed for five years at the beginning of 2015. The renovation is coordinated by David Chipperfield Architects , David Chipperfield's architectural office . In January 2015, the Federal Building Office estimated the renovation costs at 101 million euros. The federal government bears all costs. The actual costs were then around 140 million euros by April 2021.

With the decision to build the neighboring Museum of the 20th Century , which will be connected underground with the New National Gallery, the exhibition area of ​​the National Gallery will increase many times over from 2026.

In the 1970s the building was also used for concerts as part of the Metamusik Festival . It was organized by Walter Bach Auer for the Berlin Festival . At the beginning of 2015, the Kraftwerk group gave concerts for their eight classic albums there for eight consecutive days. Immediately afterwards, the New National Gallery was closed for basic repairs.