Odilon Redon , actually Bertrand Redon (born April 22, 1840 in Bordeaux , † July 6, 1916 in Paris ), was a French graphic artist and painter of Symbolism and co-founder of the Société des Artistes Indépendants . The artist's work is divided into an early black and a (late) colored phase.

Redon was born in Bordeaux as the second son of the wealthy landowner Bertrand Redon and his wife Marie Guerin. The father had bought the Chateau Peyre-Lebade winery in Médoc in 1835 (it became the property of Baron Edmond de Rothschild in 1979 ). His parents lived in Bordeaux and gave the baby to a wet nurse in Peyrelebade, a village near the estate, where he grew up with an old uncle , probably because of an epilepsy disease. As a boy he was almost exclusively interested in drawing . In 1855, at the age of 15, he took painting lessons in watercolor; In 1857 he met the evolutionary biologist Armand Clavaud (1828–1890). His interests were also in literature, the natural sciences and music. In both 1862 and 1864, at the request of his parents, he tried in vain to pass the entrance examination at the École des Beaux-Arts for the architecture class. In 1864 he went to Paris, where he visited the studio of Jean-Léon Gérôme , who taught at the École nationale supérieure des beaux-arts de Paris . Redon was not enthusiastic about the academic painting style of his teacher, who was known as a master of neoclassicism and as a salon painter . His first etchings in aquatint technique were under the influence of Rodolphe Bresdin , an artist who had visions and Redon with its mysteries made familiar.

At the Salon de Paris in 1868, the artists Gustave Courbet , Édouard Manet , Camille Pissarro and Jean-Baptiste Camille Corot , whom Redon admired, exhibited who were to serve as models for his own painting. In 1870/1871 Redon took part in the Franco-German War as an infantryman . He then moved completely to Paris, where he lived on an income that his parents' winery threw off. During this time he concentrated on the technique of charcoal drawing (fusains) . He participated intensively in the artistic life of the city, his literary interests were Gustave Flaubert , Charles Baudelaire and Edgar Allan Poe . Redon traveled extensively and studied Rembrandt's work in the Netherlands and that of Peter Paul Rubens in Flanders . He continued to spend the summer months in his parents' house, where he made a large number of charcoal drawings.

In the 1870s and 1880s, his "black" period, which includes his charcoal drawings, Redon treated literary, fantastic, but also Christian topics by placing them in a metaphysical context. He first turned to color in the late 1880s. Caliban , a monster from William Shakespeare's The Tempest , is often represented in his work, including around 1895–1900 in a small picture, The Sleep of Caliban , which is exhibited in the Musée d'Orsay .

Since 1878, he worked on, led by Henri Fantin-Latour , using the technique of lithography and could thus his Noirs ( "Black") mentioned drawings transferred to stone and printed in editions. Lithograph series appeared in quick succession, depicting the artist's dream world: 1879 Dans le Rêve , 1882 Á Edgar Poe , 1883 Les Origines , 1885 Hommage à Goya and 1886 Le Nuit . The three albums that deal with Flaubert's The Temptation of Saint Anthony (1888, 1889, 1896) make up about a quarter of his lithographic work.

In 1880 he married Camille Fargue, who came from the island of Bourbon . The marriage had two sons, the elder of whom died in the sixth month. In 1882, the influential critic Emile Hennequin (1859-1888) became aware of Redon. In a newspaper article he defended his charcoal drawings, which were shown at an exhibition in the office of the daily newspaper Le Gaulois and which were violently attacked by the public. With the journalistic support of Hennequin and Joris-Karl Huysmans , Redon became known in Paris society.

In 1884 he co-founded the Société des Artistes Indépendants and the Salon des Indépendants in Paris and was for a time vice chairman of the Société. Nonetheless, at the invitation of Armand Guillaumin , he took part in the last exhibition of the “Impressionist Group” in 1886, as he also appreciated Georges Seurat and Paul Gauguin . Redon found the painting of the Impressionists ultimately restrictive.

Around 1885 the young literary movement of the "Symbolists" arose in Paris. Influenced by Charles Baudelaire , they wanted to evade the naturalism of Victor Hugo and Émile Zola . a. Paul Verlaine (* 1844), Stéphane Mallarmé (* 1842) and Auguste de Villiers de L'Isle-Adam (* 1838) were members. The poets who wanted to create their own literary world by including "[...] dream images, hallucinations, memories and imaginary creations" - "because all of these play a role in life and even determine [...]" - saw the reluctant one Redon as one of their own. However, Redon could do little with her rules, theories and the manifesto Le symbolisme published by Jean Moréas in 1886 . In 1913 he was represented with works on the legendary Armory Show in New York .

In his “black phase”, Redon devoted himself to the human unconscious with its fears and nightmares in charcoal drawings and prints , creating haunting, sometimes eerie works. Particularly well-known are the drawing of a black raven, who appears as a messenger of death, and the depiction of a large, multi-legged spider with a smiling face on its black haired body. Another important topic of the so-called "nightmare pictures" are large eyes or eyeballs that appear to be looking at the viewer. Exemplary is the drawing of a single eye that functions as a hot air balloon , as well as an egg with a face that, squeezed into an egg cup, represents a space anxiety dream.

In his second creative phase, Redon broke completely with his "black" works and began to depict motifs from mythology as well as a fantastic natural history in bright colors and strongly abstracted in paintings of great color . The image of a quadriga floating in colored clouds and the stylized depictions of jellyfish, mussels and other marine animals are well known. These multi-layered images of a world of ideas live through the depth of the iridescent mist of color.

Although created at the same time as the Impressionist painters , Redon's work is completely independent and different. His pictures precede Expressionism and Surrealism in content and form . Many later artists therefore referred to Redon.

In 1964, his works were shown at the documenta III in Kassel in the famous hand drawings department . 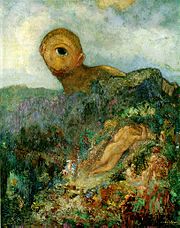 The Cyclops , oil on wood, around 1898 ( Kröller-Müller Museum , Otterlo , Netherlands) 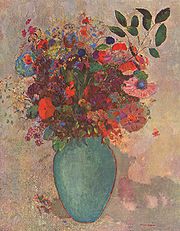