Dallas Museum of Art, in front of it the sculpture Ave by Mark di Suvero

The Dallas Museum of Art (DMA) is an art museum in downtown Dallas , Texas . It is located in what is known as the Art District along the Woodall Rogers Freeway, between St. Paul and Harwood Streets. The architect Edward Larrabee Barnes designed the museum building, which opened in 1984.

The collection includes more than 24,000 objects ranging from the 3rd millennium BC to the present day. The museum also offers teaching programs and has the Mildred R. and Frederick M. Mayer Library , a specialist library with more than 50,000 volumes.

The Icebergs by Frederic Edwin Church (1861), Dallas Museum of Art

The history of the Dallas Museum of Art began with the establishment of the Art Committee of the Dallas Public Library. At the suggestion of the Texan artist Frank Reaugh, a first exhibition of works of art took place in a room in the library in 1902. For this exhibition, the committee purchased the painting September Moonrise by Childe Hassam one of the first works for a private collection. In the following year, a group of 50 art-interested citizens from Dallas founded the Dallas Art Association. This art association continued to exhibit at the Dallas Public Library until 1909, before opening its first own building, the Free Public Art Gallery of Dallas in Fair Park. In 1929 the art collection temporarily moved to the Majestic Theater. After the institution renamed the Dallas Museum of Fine Arts (DMFA) in 1933, it was able to move into a new building in Fair Park in 1936, which is now used by the Museum of Nature & Science.

In 1943 Jerry Bywaters became the director of DMFA, who held the position for 21 years. Under his direction, the museum collected Impressionist, abstract and contemporary masterpieces. In addition, he set a regional focus in the museum collection with works by Alexander Hogue, Olin Hernan Travis and other Texan artists. In 1963, the Dallas Museum of Fine Arts merged with the Dallas Museum for Contemporary Arts (DMCA). In 1984 it was renamed the Dallas Museum of Art and the current museum building opened, which has since been expanded several times.

The museum's collections include more than 24,000 works of art from around the world. They date from ancient times to modern times.

The Wendy and Emery Reves Collection is a 1985 gift from Wendy Reves in honor of her late husband, Emery Reves . The collection comes from the couple's 1,400 m² house in France , Villa La Pausa, which Coco Chanel had previously lived in. Some rooms of the house were reconstructed in the museum and now contain the original equipment with furniture, Chinese porcelain, oriental carpets and other handicrafts, as well as the art collection with 1,400 pictures and sculptures. 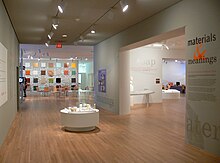 The Center for Creative Connections

In 2008 the DMA opened the Center for Creative Connections (C3 for short). It is a center for interactive learning on 1,100 square meters and offers exhibitions of the museum collections. There is also an artist workshop, Arturo's Nest, a theater and the high-tech lab.

The DMA offers the following events: