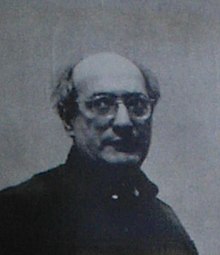 Marcus Rothkowitz was in 1903 as the fourth child of the Jewish pharmacist Jacob and his wife Anna Goldin Rothkowitz in Russian born Dwinsk, the Latvian Daugavpils today. Because of the numerous anti-Semitic pogroms in the Russian Empire, his family decided to emigrate to the USA. In August 1913 they sailed from Libau to New York on the Russian American Line's Czar passenger steamer . From 1913, Rothko lived first in Portland , Oregon , and later, after almost two years of incomplete studies at Yale University , in the art metropolis of New York . In 1932 he married Edith Sachar. His first solo exhibition was at the Portland Museum of Art in 1933 . Two years later he co-founded the artists' association The Ten . He received American citizenship in 1938 and changed his name to Rothko in January 1940. A solo exhibition took place in 1945 at Peggy Guggenheim's Art of This Century gallery in New York.

At first he was mainly influenced by the European surrealism of Max Ernst , Wolfgang Paalen and Yves Tanguy . The artistic work of his role model Henri Matisse also left clear traces in his work. A well-known painting by Rothko is tellingly titled Homage to Matisse (1953). After it was sold for $ 22.5 million at an auction at Christie's in New York in November 2005, it was considered the most expensive work of art worldwide for a long time after the end of the Second World War . His painting White Center later took this rank temporarily .

With his main work from 1949, Mark Rothko is one of the most important representatives of Abstract Expressionism and color field painting , which was significantly influenced by him. Rothko is particularly known for his large-format oil paintings with stacked, blurred, monochrome areas of color. Some of these works reach a height of over 3 meters.

Rothko had precise ideas about the hanging and lighting (in rather gloomy rooms) and recommended viewing the paintings from about 45 cm away. A central concern of his works is the intensive viewer-image relationship, which is to be achieved through non-figurative painting that is purely based on the effect of color. As early as 1947 he said: “A picture lives in community in that it unfolds in the eyes of the sensitive viewer and thus comes to life in him. It dies when this community is missing. That is why it is a daring and callous endeavor to send a picture out into the world. ” Otherwise, Rothko almost never commented on his own work and, especially after 1950, refused any interpretative advice. Instead, he confessed: "Pictures must be mysterious." In 1965 he was elected to the American Academy of Arts and Sciences and in 1968 to the American Academy of Arts and Letters . 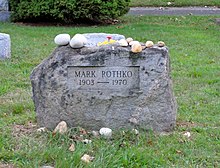 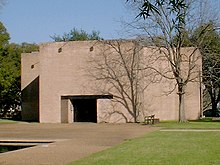 The Rothko Chapel in Houston , Texas

Plaque at the entrance to Rothko Chapel in Houston, Texas

The depression researcher Florian Holsboer cites Rothko as an example of a manic-depressive personality whose depressive phases of life can be significantly demonstrated in the color change of his work. A connection between the depression and his suicide can be assumed. The psychoanalyst Slavoj Zizek took Rothko's own interpretation of its last works on: With reference to the Black Square by Kazimir Malevich they represent the struggle of foreground ( the empty unconscious ) and the background (the reality ) is that Rothko had lost. In 1970 Rothko killed himself in his studio. He left behind his wife, illustrator Mary Alice "Mell" Beistle, who died of a heart attack just weeks later, and his two children, Kate and Christopher. Rothko had appointed two of his former friends as administrators of his estate. They were accused of selling many paintings to New York's Marlborough Gallery well below value. Only the daughter Kate ended the further sale with a process that had been going on for years.

Shortly before the artist committed suicide in 1970, the Tate Gallery in London decided to set up its own permanent Rothko Room . A large collection in the German-speaking area can be viewed in varying compositions and numbers in the Fondation Beyeler in Riehen near Basel.

In 1971 the "Rothko Chapel" was opened in Houston , where 14 works by the artist are exhibited. It was dedicated to Rothko by the art collectors John and Dominique de Ménil and is considered one of the most unusual places of worship. In addition to the paintings by Rothko in front of the main entrance to the chapel, the octagonal building features a sculpture by Barnett Newman in memory of Martin Luther King . For the ceremony to transform Rothko Chapel into an interdenominational space, the de Menils asked a friend of Rothko's, Morton Feldman , to compose a musical work for the space and the recently deceased artist. The work was headlined by Feldman Rothko Chapel .

Mark Rothko on the art market

Since the turn of the millennium, pictures by Mark Rothko have regularly achieved top prices in the double-digit millions on the art market. His work White Center (Yellow, Pink, and Lavender on Rose) from 1950 was sold in May 2007 at an auction of the New York auction house Sotheby’s for 65 million US dollars (with a buyer's premium of around 72.9 million US dollars). At the time, this was the highest price a contemporary art painting could fetch at auction. In May 2012, the image Orange, Red, Yellow achieved a sale of the New York auction house Christie's for 86.9 million dollars. On November 13, 2012 the picture No. 1 (Royal Red and Blue) sold at Christie's in New York for $ 75.1 million. On May 11th, 2015 the picture No. 36 (Black Stripe) owned by the Burda Museum at Christies's $ 40.485 million. Two days later, on May 13, 2015, the picture went NO. 10 at Christie's for $ 81.92 million to an unknown bidder. A few days earlier, the picture Untitled, (Yellow and Blue) fetched 46.5 million dollars at Sotheby's.