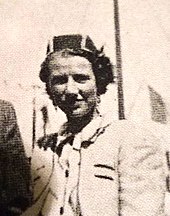 Guggenheim in New York and Paris

When Peggy Guggenheim came of age in August 1919, she received an inheritance of $ 450,000 that made her independent from her family. In the fall of 1920 she started a traineeship in the bookstore "Sunwise Turn" in New York, where she met many intellectuals and artists. In December of that year, she had her nose operated on, but because plastic surgery was still in its infancy, the operation failed.

In 1921 Guggenheim moved to Paris, enjoyed the bohemian life and met many artists and writers with whom she became friends, among them Djuna Barnes , Marcel Duchamp and Man Ray , who created a series of portraits of her in 1924. In 1922 she married the French painter and sculptor Laurence Vail ; from this connection came their two children Sindbad (1923–1986) and Pegeen Vail Guggenheim (1925–1967). After eight years the marriage ended in divorce. Vail was drunk and prone to violence, and she had fallen in love with the British writer John Holms (* 1897), who was an alcoholic and died in 1934.

On the advice of Samuel Beckett , with whom she had a brief affair from December 1937, Guggenheim began to occupy herself with contemporary art and bought works of the avant-garde , among others by Constantin Brâncuși , Georges Braque , Marc Chagall , Salvador Dalí , Marcel Duchamp , Wassily Kandinsky , Piet Mondrian , Wolfgang Paalen and Pablo Picasso . Duchamp advised her on the opening of her gallery Guggenheim Jeune , 30 Cork Street, London , which took place on January 24, 1938 with a Jean Cocteau exhibition. A complete introductory course in modern art by Duchamp was required beforehand, because Guggenheim, as she admitted, had no prior knowledge about it: “I could not distinguish one modern work from another”. A Kandinsky exhibition followed next, and in June 1938 she exhibited works by Yves Tanguy , with whom she had an affair, much to the displeasure of Tanguy's then-wife, Jeanette. When, at Kandinsky's request, she offered her uncle Solomon R. Guggenheim a picture by the painter that her uncle had previously wished for for his small museum, the Museum of Non-Objective Painting, opened in Manhattan with Hilla von Rebay in 1939, she received a brusque rejection letter from Rebay, stating that commercial offers were not welcome. In 1939, Guggenheim closed the gallery again because it - despite the great media attention that accompanied its exhibitions - did not generate any profit.

Guggenheim returned to Paris. There she expanded her collection daily at the beginning of World War II , as many artists wanted to leave the city and sell their paintings. Under the guidance of Marcel Duchamp and Howard Putzel, a young art dealer from California, she bought the basis of her large collection of modern art, including Braque, Max Ernst , Giacometti , Kandinsky, Paul Klee, and Mirò, for less than $ 40,000 . She had no idea that she was buying art at bargain prices, she later said. "I just paid what I was told."

Escape to the USA

The American journalist Varian Fry headed an aid committee in Marseille , the Emergency Rescue Committee , to enable refugees to leave the Vichy regime in France. Guggenheim supported the committee in December 1940 with a sum of 500,000 francs. Artists such as Marc Chagall and Jacques Lipchitz were among the emigrants . Guggenheim financed, for example, the departure of Max Ernst , whose work was defamed as " Degenerate Art ", and that of the surrealist writer André Breton with his family. But Guggenheim, who was of Jewish descent, also had to leave France with her collection and flew from Estoril to New York in July 1941 with Max Ernst, with whom she was friends . She had sent her art collection separately. In December 1941, shortly after Christmas, he married Max Ernst.

Art of This Century Museum and Gallery, New York

→ Main article : Art of This Century

In New York in 1942 Guggenheim reopened a gallery, Art of This Century at 30 West 57th Street, which was also a museum, and encouraged emigrants from Europe and new American artists, including Jackson Pollock . In January 1943, the exhibition "Exhibition by 31 Women" took place there, in preparation for which Max Ernst fell in love with the painter Dorothea Tanning , which led to the breakup of the marital relationship and in 1946 to a divorce. The gallery, equipped according to plans by the architect Friedrich Kiesler , existed until May 31, 1947. In 1947 Peggy Guggenheim returned to Europe and moved to Venice . In 1948, Guggenheim was invited to exhibit her art collection at the Venice Biennale . It was presented in the Greek pavilion, which was vacant due to the civil war . In the same year she acquired the unfinished Palazzo Venier dei Leoni on the Grand Canal with a garden from the 18th century and had it converted. From 1949 she used it both as an apartment and as an occasional exhibition space for her collection, which was open to the public in the summer months from 1951. 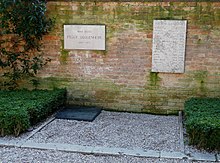 Grave site of Peggy Guggenheim and her dogs

Peggy Guggenheim died in 1979. Her grave and the grave of her beloved dogs, Lhasa dogs , are on the grounds of the Museum Garden (later called the Nasher Sculpture Garden ) in Venice. The Peggy Guggenheim Collection has been housed in the Palazzo since 1980 and continues to exhibit its collection.

Guggenheim first wrote down her eventful life in 1946 in the autobiography Out of This Century . In 1960 the work, shortened by private details and expanded to include art-related additions, was published again under the title Confessions of an Art Addict . A final edition was published posthumously in 1980.

Many of the works she has collected are now accessible in museums ; apart from the already mentioned Peggy Guggenheim Collection in Venice, there are the Solomon R. Guggenheim Museum in New York and the Guggenheim Museum Bilbao in Bilbao .

Peggy Guggenheim was the mother-in-law of the French painter Jean Hélion , who was married to her daughter Pegeen from 1946 to 1958.

Guggenheim saw herself as a “poor Guggenheim”, which was not entirely wrong due to the relatively small inheritance, but continued to enjoy “in opposition to the upper class of the society into which she was born”, its privileges. In contrast to “other Guggenheims who founded charities with the help of family assets”, Peggy Guggenheim “did not take the form of an institution and was also extremely personal.” From the beginning she distanced herself from existing norms and from her interest in the person des artist mostly preceded their preoccupation with the work of art. Because of the disregard of all conventions, she was considered a rebel, became an “ arbiter elegantiarum ” (expert in matters of taste) and “was finally considered l'ultima dogaressa ” (the last Dogaressa ) in her adopted Italian home .

Guggenheim plays an important role in the film Pollock , a biography of the American painter Jackson Pollock from 2000, played by Amy Madigan . Directed by the lead actor Ed Harris .

Peggy Guggenheim: Art Addict is a documentary about Peggy Guggenheim; Directed by Lisa Immordino Vreeland. The film premiered on April 20, 2015 at the Tribeca Film Festival .