Liepāja (German Libau , Russian Лиепая ) is a port city on the Baltic Sea in western Latvia . With 76,535 inhabitants (as of July 1, 2018) it is the third largest city in Latvia.

The city emerged from a small Curonian village at the mouth of the Lyva . The place was first mentioned as "Lyva" in 1253. As a small unfortified port in the state structure of the Livonian Order , Liwa (this spelling had prevailed in the 14th century) was burned down several times by the Lithuanians . In the 15th century, wood, meat, fish and butter were handled in the port of Liwa. But Liwa lagged behind the competing ports of Memel and Windau .

As a result of the Reformation, two Lutheran congregations emerged in Libau. One congregation ( St. Anna ) formed the Evangelical Latvian language, the other ( Trinity ) the Evangelical German language. In 1560 Libow was pledged to Prussia as part of the Grobiņa Commandery for almost 50 years (until 1609) . During this time, the population increased due to immigration from Germany, among other things. The city charter was granted in 1625 by Duke Friedrich von Kettler of Courland and Semigallia . King Sigismund III. Wasa of Poland-Lithuania , as suzerain of the duke, confirmed the city rights the following year.

Construction of the port facility began in the middle of the 17th century . In the Northern Wars, Libau suffered less from destruction than from contributions to the armies that passed through and from several plague epidemics . In 1698 a major fire destroyed most of the town's wooden buildings. The great plague from 1708 to 1714 fell victim to a third of the citizens.

From 1697 to 1703 the trade channel to Lake Libau was put into operation. The port is still located at the widened mouth of the canal and was navigable for large ships from 1730.

Libau fell to the Russian Empire in 1795 with the Duchy of Courland and from then on belonged to the Courland Governorate . For Russia, the city was of great military and economic importance because of its ice-free port. 4548 inhabitants lived in the city. After more than a hundred years of peace, there were 94,000 in 1914. In the 19th century Libau got a railway connection (1869/1876) and became an important industrial center . The first electric tram in the Baltic States was opened here in 1899 . In this year the expansion of the war port (see Karosta ) as a strategic naval base was started. From 1906 to 1914 there was direct shipping to New York . Several hundred thousand emigrants came through the port of Libau.

The First World War began for the people of Libau on August 2, 1914 with the bombardment of the port by a German warship. On May 7, 1915, German troops occupied Libau as a result of the battle for Schaulen . Due to forced evacuation inland and economic decline, there were only 43,600 inhabitants in the city at the end of 1915. After the end of the war, the Red Latvian Riflemen and the Red Army occupied almost all of Latvian territory and founded the Latvian Socialist Soviet Republic headed by Pēteris Stučka . The Latvian Provisional Government, proclaimed by the People's Council in Riga , fled to Libau in early 1919, where ships from the British fleet were anchored. In addition, the representatives of the Entente as well as the soldiers' council and the general command of the German troops were in the city. On April 16, 1919, a coup attempt by a small unit of the Baltic State Army took place here, as a result of which a government cabinet was formed with the Protestant pastor Andrievs Niedra as prime minister. The Prime Minister of the Provisional Government Kārlis Ulmanis then lived until June 27, 1919 on the ship “Saratow”, which was anchored in the port under British protection.

Traffic in the port sank to a twelfth of what it was before after 1920. The connection to the railway line to Jelgava (1929) and the establishment of the free port (1931) were of economic importance . Cultural institutions such as the opera (1922) and the philharmonic orchestra (1927) also emerged.

Murder of the Jews in Libaus

In early 1940, 15,000 Red Army soldiers were stationed in Liepāja. The formal occupation of the country followed in the summer. On June 14th and 15th, 1941 alone, around 2,000 townspeople were deported to Siberia. After the capture of Liepāja by German troops on June 29, 1941, the city was occupied by the Germans until May 9, 1945. Most of the more than 7,000 Jewish residents were killed in the massacres in Liepāja by the Wehrmacht and SS in so-called hostage shootings, over 3,000 of them from December 15 to 17, 1941 in Šķēde.

In 1944 and 1945, the port was next to Windau the most important connection of the enclosed Army Group Courland . Many tens of thousands of residents fled the Red Army by ship. After 1945 the prisoner of war camp 349 existed for German prisoners of war .

Between 1945 and 1990 the Soviet leadership set up industrial and fishing companies. The port served as a base for the Soviet Navy . During the Cold War , the north German city ​​of Flensburg became the projected nuclear target of the Soviet submarine base in Liepāja.

By 1974 the city had 100,000 inhabitants again. Of these, more than half were families recruited from Russia.

The city center with the old storage district, the wide and fine sandy dune beach on the Baltic Sea are well worth seeing 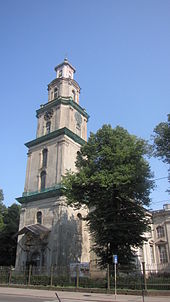 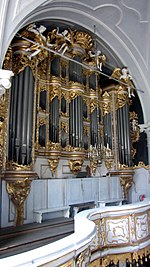 Liepāja is the seat of the Roman Catholic diocese Liepāja and an Evangelical Lutheran diocese of the same name . Both extend over the area of Courland (Lat .: Kurzeme).

From 1995, the economy flourished again. The main export goods are steel goods, furniture and textiles. The service sector is currently growing in importance.

The port of Liepaja ranks third among the Latvian ports in terms of cargo handling (after Riga and Ventspils ). In 2016, 9% of Latvian imports and exports were handled by sea in Liepaja.

The Liepāja School of Applied Arts is one of the few training centers in the world where knowledge about the artistic processing of amber is imparted. Some of the artisans and artists involved in the reconstruction of the Amber Room in the Catherine Palace in Pushkin also attended this school.

Liepāja maintains the following cities and towns of partnership relations: