Bergen [ ˈbærgən ] is with 283,929 inhabitants (as of February 27, 2020) the second largest city in Norway , a municipality in the province ( Fylke ) Vestland and its administrative center. The greater Bergen area has around 440,000 inhabitants.

The port of Bergen ( UN / LOCODE NO BGO) is one of the busiest seaports in Europe, from which Hurtigruten ships depart. The city is the starting point of the Bergensbane . In terms of culture, there is the well-known theater Den Nationale Scene and the Grieghalle .

Bergen is a port city and is located on the Inner Byfjord on the west coast of Norway. The city is also known as the “gateway to the fjords”. The highest point in the municipality is Gullfjellet (987 m). With around 2548 mm of precipitation on 248 rainy days a year (as of 2005), the city is the “rainiest city in Europe”.

Bergen is also known as Syvfjellsbyen (City of Seven Hills) in Norway . This nickname is said to go back to the poet Ludvig Holberg , probably based on the Seven Hills of Rome . The actual number of hills surrounding the city is controversial, partly because five of them (Ulriken, Fløyfjellet, Rundemanen, Blåmanen and Sandviksfløyen) are all part of the same massif. Even the Storavarden on the neighboring island of Askøy is counted occasionally on the seven hills.

On the annual 7-fjellsturen (7-hill tour), which is organized by the local branch of the Norwegian Trekking Association , the following 7 hills have been climbed, counterclockwise, since 1981:

The city is characterized by Bryggen, which runs along the natural harbor Vågen , or formerly Tyske Bryggen (Norwegian for Landungsbrücke / Kai or German quay), which are old trading facilities of the Hanseatic League . The Marienkirche and other buildings also date from this time .

After several devastating city fires (1702, 1855, 1916), which were favored by the typical Norwegian timber construction, the city issued ordinances that no longer allowed the construction of wooden houses in the city area. The Bryggen harbor district , which was not spared several times during the city fires, was rebuilt according to original plans after each destruction. The profile is therefore still the same today as it was in the 12th century. For this reason, Bryggen was named a World Heritage Site by UNESCO in 1979 as an example of Hanseatic architecture in Norway . 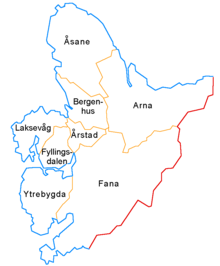 The building stone of Augastad to the east points to Iron Age traces .

According to information in the King's Sagas , Bergen was founded in 1070 as Björgvin ("mountain meadow") by King Olav Kyrre . From the 12th century it was the Norwegian coronation city; later it was replaced in this function by Trondheim .

In 1360 a Hansekontor ( Tyske Bryggen ) opened in Bergen . Although Bergen is often referred to as a “Hanseatic City”, it was not a member city with equal rights, as cities in which Hanseatic offices were located were forbidden to become Hanseatic cities. In 1665, during the Second Anglo-Dutch War , English warships raided a Dutch merchant fleet in the port of Bergen. The battle in the Bay of Bergen ended with the defeat of the English, also thanks to the support of the Dutch by the Danish fortress garrisons.

Up until 1880, Bergen was Norway's most important port and largest city. On January 16, 1916, a large part of the town, which still consists of many wooden houses, was destroyed by a major fire.

In the 19th century leprosy was widespread in Norway and Bergen was one of the epidemic centers. Between 1850 and 1900 there were three leprosy hospitals in the city and the highest density of infected people in all of Europe. In 1873 the Norwegian doctor Gerhard Armauer Hansen discovered the pathogen Mycobacterium leprae in Bergen . The oldest leprosy hospital, St. Jørgens Hospital, which opened in the 15th century, treated leprosy patients until the 1940s and is now home to the Bergen Leprosy Museum and the Leprosy Archive, which is part of the UNESCO Memory of the World program .

During the Second World War , Bergen was occupied by German troops on the first day of the German invasion , on April 9, 1940 . The city was later damaged by Allied bombing. The German Air Force built to defend the city and the submarine -Hafens the nearby island of Herdla and the fortress Fjell festning out. On April 20, 1944, the explosion on the German ammunition transporter "Voorbode", which was lying on the quay in front of the Bergenhus Fortress, claimed numerous lives and caused severe damage to hundreds of buildings.

The city of Bergen formed its own province ( Fylke ) until 1972 , after which it was part of the Hordaland province until 2019 . It has been part of the Vestland Province since January 1st, 2020.

The Bergen City Assembly (bystyre) consists of 67 elected city councilors. Nine of them are paid full-time politicians : the mayor (ordfører) , his deputy (varaordfører) and seven chairmen of the municipal committees (komité) . In 2000 the proportional representation system was replaced by the parliamentary majority principle: The political majority in the city assembly elects the mayor and the city government ( byråd ) , consisting of the chairman of the city government (byrådsleder) and up to six other members (byråd) .

From 1971 to 2015, the local elections always resulted in majorities for the center-right parties, with the exception of 1991. Since 2015, a center-left city council made up of the Labor Party , KrF and Venstre , which since 2019 also includes the MDG, has governed .

Bergen has two town halls. The city assembly still meets in the old town hall from the 16th century.

Blazon : “In red within a circular golden border , in it the inscription“ SIGILLVM: COMMVNITATIS: DE: CIVITATE BERGENSI ”(“ Seal of the City of Bergens ”) in silver majuscules, a silver gate castle growing out of golden Siebenberg with a black-grooved battlement wall on an ungrooved base central, pointed arch portal rising up between the battlements, inside the black banded silver, closed gate, with sideways rising stepped friezes, each surrounded by a black arched window, behind the battlements a central battlement tower with two smaller tinned side towers, each with a black round arched window. "

Monument by Leif Larsen ("Shetlands-Larsen") in the port of Bergen

Monument to Madam Felle by Kari Rolfsen in the Sandviken district . 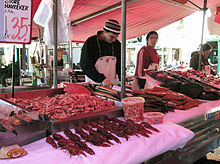 Fish market in the port of Bergen

In Bergen, monuments have been set up for several well-known personalities, including the Ibsen memorial and the Holberg memorial . Several sculptures such as the Reclining Poet , the Homeless and Salome are set up in Bergen's public space .

From an economic point of view, Bergen is strongly influenced by Norwegian oil production. Due to the favorable geographical location at the level of the Norwegian oil fields ( Troll A and others), there are several supply facilities in the city area. a. Training centers for helicopter pilots.

Another economic factor is the extensive seaport and the associated shipyard and fish industry (aquaculture). Other branches of industry are mechanical engineering, steel production, textile and electrotechnical industries.

Bergen has a number of educational institutions, the most important of which are:

In Bergen, the Christi Krybbe skoler, founded in 1737, is the oldest still existing primary school in Norway.

View from Fløyen to Bergen

Bergen is connected to the Norwegian capital Oslo by rail via the Bergensbanen , which is one of the most beautiful railway lines in Europe and ends at Bergen train station . On the road there is the E 16 , which has no ferries but some very long tunnels, and the Reichsstraße 7, which crosses the Hardangervidda . The large suspension bridges Sotra Bridge to the west and the Askøy Bridge to the north lead to larger islands in the vicinity .

Local public transport in Bergen was implemented after the tram operation was discontinued in 1965 with trolleybuses ( Trolleybus Bergen ), city buses and suburban trains from Vy . The Bergen light rail has been in operation since June 22, 2010 , initially connecting the city center with the residential areas in the south. The Bergen light rail system now runs to Bergen-Flesland International Airport. There is also a funicular to Mount Fløyen , the Fløibane , and an aerial cableway to Mount Ulriken , the Ulriksbanen .

→ Main article : List of personalities from the city of Bergen