Asmara ([ asˈmaːra ], Tigrinya : ኣስመራ, Asmera , Arabic أسمرة) is the capital and by far the largest city of Eritrea .

The city is located at an altitude of 2325 meters on the edge of the high plateau, which drops steeply from here to the geological depression formed by the spreading zone between the African and Arabian plates and in the deepest zone of which is the Red Sea .

Before the colonial era

Ras Alula , governor of the Medri Bahri Empire during the Negus Yohannes IV , was one of the pioneers of Asmara.

According to oral tradition, shepherds founded four villages in the area of ​​today's city in the 12th century, which regularly conflicted with one another. Their wives are said to have decided one day to come to an agreement and make peace. The name of the city is derived from this founding myth, earlier ኣርባተ ኣስመራ, Arbate Asmera , which means: "The four have united", which was later shortened to the current name. The modern part of the city, in which the historical core of the city was located, is still called Arbate Asmara.

The Ethiopian general Ras Alula , who controlled the area of ​​Medri Bahri after the occupation by Ethiopia in 1879, was fighting against the Italian colonial troops in 1884 when he established a fortified residence on a hill of Asmara. With that he created the basis for the modern development of the city. In 1889, Asmara was occupied by Italy , which in 1900 instead of Massaua made it the capital of the Italian colony of Eritrea . In 1911 the Massaua – Biscia railway reached the city. It was later supplemented by the Massaua – Asmara road , further road connections to the hinterland, the railway line continued to Biscia and in 1937 the Massaua-Asmara cable car to the port of Massaua went into operation.

In Italian fascism , Asmara gained significant importance as the center of the Italian deployment area for the Italian-Ethiopian War (1935–1936) from 1932 at the latest and experienced rapid growth, especially through immigration from Italy; the population quintupled to almost 100,000 inhabitants, more than half of them Italians. The population growth was followed by a construction boom to cope with the new functions. The buildings that were subsequently erected from the mid-30s are often characterized by modern and high-quality architecture, which, however , was realized without any consideration for the local population and traditional structures and with partial introduction of racial segregation .

From this period, numerous buildings in the style of Razionalismo , the Italian version of classical modernism , are still preserved today . Asmara has been a UNESCO World Heritage Site as the “modernist city of Africa ??” since 2017 .

The Italian language is often still present in the city: the manhole covers bear the inscription Comune di Asmara - Fognature ("Municipality Asmara - sewage network"), bars and restaurants occasionally have Italian-language names such as Bar Vittoria , Roma , Cinema Impero or Pasticceria Moderna . Older people in particular speak Italian very well and there are many Italian forms of expression such as Andiamo! (“Let's go!”) Or E allora? ("So what?") Common.

On April 2, 1941, the British army occupied Asmara without a fight after the Italian army surrendered after the Battle of Keren . The British occupation pursued a rigorous dismantling policy from 1942 to 1952 , which they regarded as Italian war reparations , but which severely damaged the infrastructure of the country and the city.

Due to the federation with the Abyssinian Empire in 1952, Asmara lost its role as the country's capital. This sinking into the provinciality, the poverty of the country and the lack of investments due to the Eritrean War of Independence , which had spanned three decades since 1961, meant that the historical building fabric was largely preserved.

With the independence of Eritrea in 1991, Asmara regained its function as capital. All of the country's central authorities have their headquarters here. Today, the size of the city has multiplied compared to the colonial times thanks to the construction of new offices and villas and the influx of people from the countryside.

Due to its location in the cold tropics, the days are warm all year round and the nights are cool. 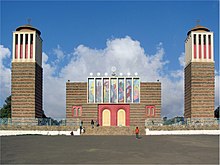 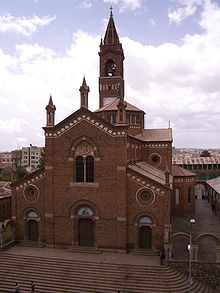 Roman Catholic Church of Our Lady of the Rosary

In November 2011, the African Cycling Championships took place in Asmara .