The Abyssinian Empire (more rarely Abyssinian ; Amharic መንግሥተ፡ኢትዮጵያ , transcription Mängəstä Ityop'p'ya , German literally Empire Ethiopia ) was a monarchy in East Africa on the territory of today's states Ethiopia and Eritrea . It existed from around 980 BC to 1974 - with a brief interruption during the occupation of fascist Italy from 1936 to 1941. The empire was abolished after a coup and replaced by the People's Democratic Republic of Ethiopia . In its time it was the oldest still existing state in the world and the only African nation that successfully opposed the European colonial conquest of Africa during the 19th century.

The Ethiopian emperors were called Negus Negest , literally King of Kings , and were members of the Zagwe Dynasty and the Solomon Dynasty .

Human settlement in Ethiopia and Eritrea began very early, which has been proven by finds. It is believed that the gold land of Punt, known in ancient Egypt, was in what is now Eritrea. In the highlands of Abyssinia founded Menelik I. According to legend, around 980 BC, the Abyssinian Empire.

In the 1st century BC the Aksumite Empire was established, which lasted until the 7th century. This empire became Coptic Christian in the 4th century and was thus one of the first Christian states.

After the conquest of Aksum by Queen Gudit (or Yodit) from the Kingdom of Shewa , a new period began in the history of Ethiopia. According to Ethiopian tradition, Queen Gudit ruled the former Aksumite Empire for over 40 years before handing the crown over to her successors. Her reign marked the end of the Aksumite Empire in Ethiopia.

The last descendants of Empress Godir were overthrown by Mara Takla Haymanot . He founded the Zagwe dynasty in 1137 and married a female descendant of the last Aksumite emperor in order to consolidate his claims as the legitimate heir to the throne of the long-extinct empire. The Zagwe were of Agau ancestry , whose power had not expanded beyond their ethnic origin until then. The capital was near Adafa , not far from today's modern Lalibela in the Lasta Mountains. The Zagwe carried on Christianity from Aksum and built numerous magnificent churches like the one in Lalibela. The rule of the dynasty lasted until the overthrow by a new government in 1270, which also claimed the descent from the old Aksumite kings for itself.

Under the Solomonic Dynasty

In 1270 the Zagwe dynasty was overthrown by Yekuno Amlak . This claimed to be descended from both the Aksumite rulers and King Solomon . The Solomon dynasty belonged to the Habesha people group, to which the Amharen and the Tigray belong.

The Habescha ruled with only a few interruptions from 1270 to 1974. During this time, the empire conquered all areas of what is now Ethiopia and Eritrea. They successfully fought the Ottoman armies and established relationships with European powers.

Fighter from the early 19th century

From 1769 to 1855 the Ethiopian Empire went through the "era of the princes" ( Amharic Zemene Mesafint ). This was a period in Ethiopian history, the numerous conflicts between various local warlords raged; the emperor was limited to one leader who only dominated the area around the then capital Gondar . Both the development of society and that of culture stagnated. Religious conflicts, both within the Ethiopian Orthodox Church and against Muslims , were often used as a pretext for mutual power struggles. The era of princes ended with the reign of Tewodros II. 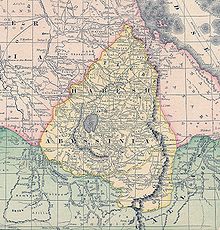 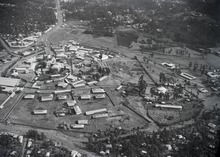 The 1880s were marked by the European race for Africa and at the same time a time in which Ethiopia was modernizing. During the First Italo-Ethiopian War , the Abyssinians defeated the Kingdom of Italy in the Battle of Adua in 1896 - the country was able to maintain its independence. Italy and Abyssinia signed a provisional peace agreement on October 26, 1896.

Emperor Menelik II modernized the country during his reign and expanded the empire. On September 28, 1923, Ethiopia, the only independent state in Africa alongside Liberia and the Kingdom of Egypt , was accepted into the League of Nations . Emperor Haile Selassie introduced the country's first constitution in 1931 .

On October 3, 1935, Italian soldiers, commanded by General Emilio De Bono , marched into Ethiopia from the colony of Eritrea and started the second Italian-Ethiopian war. The war, which was marked by Italian use of poison gas and violations of the Hague Land Warfare Regulations , lasted at least seven months before Emperor Haile Selassie went into exile and the Italians declared victory. The invasion was condemned by the League of Nations and Fascist Italy under Benito Mussolini was labeled the aggressor, but few sanctions were imposed. In May 1936, Ethiopia finally became part of the Italian colonial area of ​​East Africa and remained in its possession until the Second World War .

In 1941 the Ethiopian Empire was liberated from Ethiopian partisans and units of the Commonwealth of Nations as well as from British troops . The main offensives against the Italian colonial troops were launched from Anglo-Egyptian Sudan and British East Africa . Five years after his flight into exile, Emperor Haile Selassie returned to Addis Ababa .

After the Second World War, the former Italian Eritrea was initially incorporated into the Ethiopian Empire as a federal state. Eritrea's independence was gradually removed, and in 1962 Eritrea was downgraded to a province.

The women's suffrage was introduced 1955th

From 1941 onwards, the Abyssinian Empire consisted of a total of 14 provinces, which were repeatedly reorganized in the past:

Rise of the Derg

In 1974, Haile Selassie was removed from the Derg , a pro-Soviet Marxist-Leninist military junta led by Mengistu Haile Mariam . The monarchy was abolished and a real socialist one-party system was established. Haile Selassie was imprisoned and died in unknown circumstances. Eritrea remained part of Ethiopia even after the end of the empire. It gained its independence in 1993, two years after the end of the Eritrean War of Independence .