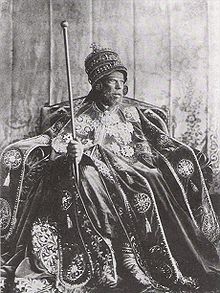 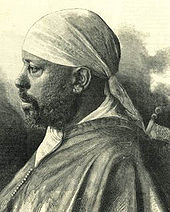 Emperor Menelik II on an Ethiopian postage stamp from 1894

Before his rise, Menelik had been the Negus of Shewa, one of the three most important rulers ( Ras ) of Ethiopia.

“After Theodors II's death, John of Tigre emerged victorious from the succession struggles with King Menelik of Shoah , Gobasé of Amhara  [...] was defeated [...] Through the mediation of the priesthood [...] Menelik agreed in a contract in 1878 the emperor, in which he recognized him as emperor, but was granted a kind of autonomy in the areas he controlled. John's son Araya Johannes married Menelik's daughter Zawditu ; after the prince's death, the Shoah recognized the Negus as heir to the throne. "

As King of Shewa , over a period of about 15 years, he successively conquered independent regions and states in the south and east, such as the Gurage , the Gibe kingdoms of the Oromo , the old emirate of Harar and others. a .; after his coronation as emperor, he continued his expansion efforts, which also consolidated his rule economically. Among other things, he conquered the empire of the "god king" of Kaffa and finally also subjugated the Sultan of Awsa ( Aussa ), an important state of the Muslim Afar .

With Italian help and Italian weapons, he was able to assert himself as emperor within a short time after the death of Yohannes IV, although Yohannes had actually chosen his son Mengesha Yohannes as his successor. With Italy he concluded the Wetschale Peace and Friendship Treaty in 1889 , although the Italian and Amharic versions differed - in the Italian version it could be understood as the establishment of an Italian protectorate over Ethiopia. Since Italy subsequently refused to exclude this interpretation, Menelik II declared war on Italy and let the Italians attack in Eritrea from 1895 , initially through his vassal Mengesha Yohannes, who ruled Tigray. After Ras Mengesha's defeats at Coatit , Senafe and Debra Ailà , Menelik finally intervened in the Italian-Ethiopian War himself at the end of 1895 . In 1896 he defeated an Italian army at the Battle of Adua . To prevent his independent country from becoming a British or Italian colony, he concluded treaties with the other colonial powers, e.g. B. with France . Menelik, who made Addis Ababa, founded in 1886 by his wife Taytu , his capital, maintained particularly good contacts after the Franco-British (1899/1904) and Franco-Italian compromise (1902/1903) to form the German Empire . As early as August 1900, the German natural scientist Carlo von Erlanger visited the emperor in Addis Ababa as part of his East Africa expedition and described him as a "firm and iron character, without being a despot". On March 7, 1905, a German delegation led by Friedrich Rosen and Menelik signed a friendship and trade treaty between the German Empire and Ethiopia.

In the following years Ethiopia a. a. quickly modernized with German help. Among other things, a French railway line to Djibouti was built, a telephone and telegraph network established and an Ethiopian national bank and post office established. The railway line was originally to be built in three sections: first from Djibouti to Harar , then from Harar to Addis Ababa and then on through Kaffa to the south-west of the country. The work under the supervision of Alfred Ilg began in Djibouti in 1892 and the first section, ending at Dire Dawa , was opened to traffic in 1903. The second section to Addis Ababa was completed in 1915, Menelik did not live to see this completion. The third section has not yet been built. The telegraph network connected Addis Ababa with Harar and Djibouti and was put into operation in 1903. In 1894 Menelik II introduced his own postage stamps and replaced the Maria Theresa thaler with the Ethiopian dollar with his likeness on the coin.

Menelik II also accepted several German officials into his government, many of whom, however, were removed again in 1909 under pressure from the powerful and anti-European Empress Taytu.

Menelik died after a long illness in 1913. His successor was his grandson Lij Iyasu ( Iyasu V. ).