Dhaka ([ ˈdaka ], Bengali : ঢাকা , Ḍhākā ; anglicised Dacca until 1983 and derived from it Dakka ) is the capital of Bangladesh and with 8,906,039 inhabitants in the actual city (status: 2011) and 19,580,000 in the agglomeration (status: 2017) the largest city in the country, ahead of Chittagong and Khulna . It is also the capital of the division (administrative unit) of the same name . Dhaka lies on a branch of the Dhaleshwari River in the heart of the largest jute- growing region of the world. The surrounding area is very densely populated and is hit by heavy monsoon floods.

The district of Hāzāribāgh was voted one of the most polluted places in the world by the Blacksmith Institute in 2013 due to the sewage from around 250 tanneries .

Dhaka is located on the Buriganga River . The city is only about six meters above sea level. There is a subtropical climate ; During the monsoons from May to September, the stormy rain showers can break down sewers and cause large-scale flooding. In the summer of 2004, 40 percent of dhakas were under water after heavy monsoon rains.

Dhaka's history dates back to 1000, but it became famous as the capital of Bengal . The city fell under British rule in 1765 and was temporarily the seat of government at the time of Bengal's independence. The population of Dhaka fell from around 150,000 in 1757 to 30–40,000 by 1840. If exports via the place were still 3 million rupees in 1787, they were practically zero by 1817. At the same time the importance of the relatively nearby Calcutta increased. The reason for this lay in the de-industrialization of Bengal (and later the whole of India) due to British trade policy, which massively favored machine-made goods in the motherland by abolishing tariffs. As a result, many Indian craftsmen were deprived of their livelihood. The penniless workers returned to the countryside.

On August 6, 1874, the foundation stone for a large waterworks was laid. Europeans had set up jute cleaning machines and it was hoped that the growing interest of the local population in mechanical spinning mills and weaving mills since 1874 would revive the weaving mill, which had been declining, and which the English calicos had previously made successful competition. With the convenient water connection with the sea via steamers, one suspected a bright future for the district; Since January 1, 1871, the railway has ended at its western border, at Goalundo on the Ganges .

The city had 79,076 inhabitants in 1881. The population at that time was composed almost equally of Hindus and Muslims . At that time it was also an important trading center for rice from the Delta, indigo and wood from Tippera and tea from Assam and, under the English administration, the seat of many authorities and schools. A special feature was the elephant depot set up here.

In 1905 the administrative division of Bengal took place . Dhaka became the administrative seat of the newly formed province of East Bengal and Assam . Due to protests, however, this had to be partially reversed in 1912 and the city lost its status as provincial capital again to Calcutta.

After the partition of India and Bengal in 1947 , Dhaka became the capital of East Bengal belonging to Pakistan . In 1970 the city was hit by the severe bhola cyclone , which shortly afterwards triggered the Bangladesh war between East and West Pakistan. As a result of the independence from Bangladesh resulting from the war , the city became the capital of the new state. On October 5, 1982, the change in the spelling of Dacca in Dhaka was announced and took effect on January 19, 1983.

Sadarghat, one of the main ports

Transport hub not far from the University of Dhaka 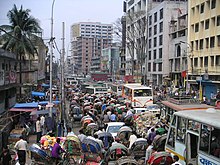 Dhaka is the eleventh largest urban agglomeration in the world. In 2015 Dhaka will have a population of almost 17 million. Since the 1960s, the city has experienced unrestrained growth, mainly due to the influx of people from the countryside. 30 to 40 percent of the population live in slums. At around 400 euros, the average annual income per capita in the capital is higher than in the rest of the country. In a ranking of cities according to their quality of life, Dhaka ranked 216th out of 231 cities worldwide in 2018.

Consequences of rapid growth: the infrastructure cannot keep up with the rapid growth of the city. The city is totally overloaded with traffic. The air pollution is enormous. There are always failures in the electricity and water supply, as the overall urban plans (from 1959 and 1997) were only implemented half-heartedly. In summer, the monsoons repeatedly lead to major floods, and urban life comes to a standstill.

Dhaka is the industrial, economic and administrative center of Bangladesh and a trading center for jute , oilseeds , sugar and tea . The main products are textiles and jute products. Textiles in particular are among the exports (75%), but leather is also. (Raw) jute, tea and tobacco are added from the agricultural sector. In addition, shrimp and fish are often exported to other countries. The export value was $ 6,500 million in 2000/2001 (an increase of 12.4%). The main export partners are the USA (32%), Germany (11%), Great Britain (8%) and France (5%).

Some universities such as the University of Dhaka , the BUET or the Dhaka Medical College and Hospital and other educational institutions and agricultural research institutes are located in the city. Dhaka is also the seat of the Asiatic Society of Bangladesh .

Dhaka International Airport is located in the north of Dhaka . Dhaka has several ports with access to the Bay of Bengal , a marginal sea of ​​the Indian Ocean .

Traffic in Dhaka is particularly chaotic in the center and is characterized by frequent traffic jams. Orientation is made difficult by the fact that main streets are named after the areas they pass through rather than their official names. Side streets and alleys often have the same names as the main streets nearby. Rickshaw drivers are still part of the street scene. 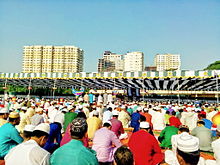 The population of Dhaka is relatively homogeneous. Most of them belong to Islam , most of them are Sunnis . There is a Hindu minority of just under 10 percent and a small number of Buddhists and Christians .