This article deals with the feudal title Negus of the Empire of Ethiopia. For more meanings, see Negus (disambiguation) . 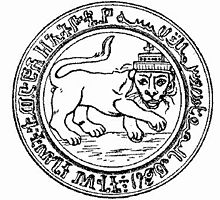 Negus ( nəguś , Amharic ንጉሥ ) means “ king ” in the ancient Ethiopian and Amharic languages and is one of the oldest feudal titles of the Abyssinian Empire .

The history of the title is traced back to the time of the empire of Aksum . A Negus was an independent ruler and was only subject to the Emperor of Ethiopia, and only formally. The Ethiopian emperor himself carried the title Neguse Negest (also transcribed as Negusa Nagast , Amharic ንጉሠ ነገሥት ), which means king of kings . The title Neguse Negest is yet to Solomon his alleged son, the Ethiopian I. Menelik have awarded.

The title was first mentioned in the English-speaking world in 1594.

As the last Negus 1928, Ras Tafari Makonnen Empress Zauditu to Negus crowned (without specifying Province). Ras Tafari became Emperor of Ethiopia in 1930 as Haile Selassie I. During his reign there was no more coronation of a Negus.

See also : List of Emperors of Ethiopia  and Negash

Wiktionary: Negus  - explanations of meanings, word origins, synonyms, translations
Due to the complicated transcription from Amharic , the spelling of Ethiopian proper names can be different in different publications.