Flag of British East Africa and the subsequent colony 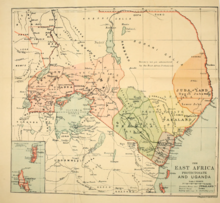 Map of the British Protectorates of East Africa and Uganda, 1898

1 cent and 10 cent coin of the East African Shilling

European missionaries settled in the area from Mombasa to the Kilimanjaro massif under the protection of the Sultan of Zanzibar in the 1840s . In 1886 the British government encouraged William Mackinnon to exert British influence in the region. MacKinnon had already had an agreement with the Sultan and his shipping company was trading exclusively in East Africa. The Imperial British East Africa Company , the future administrator of British East Africa, began operating in the area in 1888. The company also worked with the permission of the Sultan and from 1890 also administered Uganda for ten years .

When the company began to fail, the British government declared the territory a protectorate on July 1, 1895, and in 1902 still annexed the territory of Uganda. In 1902 the British government also released the fertile mountain region for settlement. The capital was moved from Mombasa to Nairobi in 1905 . In 1913 the island of Zanzibar became part of British East Africa. On July 23, 1920, the main part of the Protectorate was converted into the Crown Colony of Kenya. Since British East Africa was to be economically controlled from British India , the rupee was introduced as the official currency in 1905 . This concept was not continued, with the founding of the Kenya colony, the pound was introduced from which today's Kenya shilling developed.

As a colonial protection force, the King's African Rifles were set up from 1902 , which replaced smaller independent units.

One after the other, the colonial administration for British East Africa issued the following currencies as coins or banknotes:

Postage stamps and history of the post in British East Africa 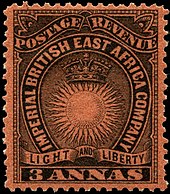 Company postage stamp from 1890, with sun and crown

The early missionaries sent their letters via messengers who then took them to shipping companies in Zanzibar. Post offices opened in Mombasa and Lamu in 1890 and after initial surcharges on British stamps with denominations of 1/2, 1 and 4 Annas , the company issued stamps that symbolically showed a sun with a crown and were labeled Imperial British East Africa Company . All of these stamps were valued in annas and rupees.

A shortage of stamps between 1891 and 1895 resulted in various surcharges and after the proclamation as a protectorate in 1895, the stamps were identified by the imprints British / East / Africa on Indian stamps. During this period, British East Africa also joined the Universal Postal Union . 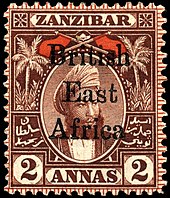 In 1896 a series of stamps was issued depicting Queen Victoria and inscribed with British East Africa . These stamps ran out in 1897 and stamps from Zanzibar were, like many Indian ones, poorly overprinted. It also opened several post offices along the Uganda Railway .

In 1901, the postal administration merged with that of Uganda and in 1903, a year after the merger of the original territory and Uganda, stamps were issued with the likeness of Edward VII and the inscription East Africa and Uganda Protecorates . This design was retained throughout this period, with the watermarks and colors changed in 1904 and 1907, and from 1912 George V was seen on the postage stamps.