The Sultanate of Zanzibar ( English Sultanate of Zanzibar , Swahili Usultani wa Zanzibar , Arabic سلطنة زنجبار, DMG Salṭanat Zanǧibār ) comprised the areas that were under the rule of the Sultan of Zanzibar . The core area comprised the Zanzibar archipelago with the capital Zanzibar . During the early days, the sultanate comprised large areas in East Africa along the Swahili coast between what is now Somalia in the north and Tanzania in the south. In the course of its history, Zanzibar increasingly came under the influence of the great European powers and was forced to gradually cede its territories on the mainland until finally only the islands of Unguja and Pemba remained and later became a British protectorate. In 1964, Zanzibar became a semi-autonomous state in what is now Tanzania. 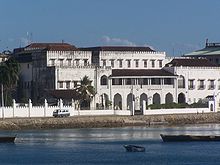 The Sultan's Palace in Zanzibar

East Africa at the time of the British-Zanzibarian War , 1896

In 1698 Zanzibar became an overseas province of Oman after its sultan, Saif ibn Sultan I , defeated the Portuguese in Mombasa . Within the possessions of the Sultans of Oman, Zanzibar developed into the center of the slave trade and the cultivation of cloves . In 1832, Sultan Said ibn Sultan temporarily moved his residence from Muscat to Zanzibar, and then officially from 1840. After his death, a struggle for succession to the throne broke out among his sons, Majid bin Said and Thuwaini ibn Said , which led to the division of the empire. Majid bin Said and his successors ruled Zanzibar from then on, while the line of Thuwaini ibn Said has ruled Oman ever since.

Majid bin Said expanded the slave trade along the coast of East Africa, making Zanzibar the most important slave market in all of Africa . He also strengthened relations with the then great powers such as the United Kingdom , the United States , Portugal , France and several German states.

Barghasch ibn Said had the Stone Town district expanded and, following diplomatic pressure from London , stopped the slave trade in 1873. During his reign, European traders increasingly penetrated mainland East Africa. In the fall of 1884, the German East African Society (DOAG) reached the coast of East Africa and began setting up the first branches. In 1885 Barghasch ibn Said had to recognize the DOAG protection treaties with East African chiefs and the establishment of the German East Africa colony on the mainland.

After the German Empire and the United Kingdom had signed the Zanzibar-Helgoland Treaty , Ali ibn Said had to recognize the British protectorate over Zanzibar in August 1890, which became a constitutional monarchy . In 1892 the Kingdom of Italy forced Ali to lease the coastal cities of Mogadishu , Warsheikh , Merka and Baraawe on the Somali Banaadir coast .

Hamad ibn Thuwaini ibn Said came from the Omani line of the Bu Saʿīd dynasty and was installed as sultan by the British in 1893. Right at the beginning of his rule, the Italians forced him to sell the towns on the Somali coast that had been leased the previous year. Between 1893 and 1896 the British subordinated the Sultanate of Witu to the Sultanate of Zanzibar. In 1896 Hamad ibn Thuwaini ibn Said was presumably poisoned by his cousin and brother-in-law Chalid ibn Barghasch , who then took the throne and rebelled against the British, which led to the British-Zanzibarian War on August 27, 1896 . After 38 minutes, Chalid ibn Barghasch had to give up and went into exile in Dar es Salaam in German East Africa.

The British installed their candidate Hammud ibn Muhammad ibn Said as Sultan of Zanzibar. Under his rule, the slave trade, which had previously been forbidden but continued to be practiced, was finally ended.

Ali ibn Hammud became Sultan of Zanzibar in 1902 and finally sold Mogadishu to Italy in 1905. During his entire reign he had to defend himself against the claims of Khalid ibn Barghash, who had been deposed in 1896, to the throne of Zanzibar. As a result of his training in England , Ali ibn Hammud was ailing in the unfamiliar climate of Zanzibar and barely spoke Arabic and Swahili. In 1911 he resigned in favor of his cousin Chalifa ibn Harub ibn Thuwaini , but did not abdicate formally and died in Paris in 1918 .

Abdullah ibn Chalifa became Sultan of Zanzibar in 1960, the African year , after the death of Chalifa ibn Harub ibn Thuwaini, but did not achieve his father's popularity. He died just three years later and Jamjid ibn Abdullah succeeded the throne in 1963. On December 13, 1963, Zanzibar gained independence from the United Kingdom . The Zanzibar Revolution broke out on January 12, 1964 , during which the sultanate was overthrown and the Arab upper class chased out or killed. On the same day the People's Republic of Zanzibar and Pemba was founded, which on April 26, 1964, united with Tanganyika to form Tanzania .

Wikisource: Friendship, trade and shipping treaty between the German Empire and the Sultan of Zanzibar. December 20, 1885  - Sources and full texts