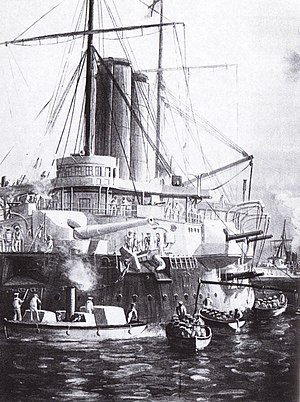 The HMS St George and HMS Philomel in port

The British-Zanzibari War was waged between Great Britain and the Sultanate of Zanzibar between 9:00 and 9:38 a.m. on August 27, 1896 . With a duration of only 38 minutes, it is, at least according to the Guinness Book of Records , the shortest war in world history. On the British side he claimed no fatalities (1 wounded), on the Zanzibari side around 300 dead and 200 injured.

The war broke out when Sultan Hamad ibn Thuwaini ibn Said , who had cooperated with the British colonial administration , died on August 25 and his cousin Chalid ibn Barghasch seized power over the sultanate in a coup with German backing. However, the British had designated Hamad and Khalid's cousin Hammud ibn Muhammad ibn Said as their compliant successor, and so they suggested that Khalid abdicates.

Chalid refused, however, and instead raised an army of around 2,800 men in two days, armed with old handguns, which tried to arm the seafront of the old town of Zanzibar in the area of ​​the palace in the event of a British attack with three dozen muzzle-loading cannons . The British under Sir Harry Rawson meanwhile pulled together five warships off the coast (HMS St. George , HMS Philomel , HMS Racoon , HMS Sparrow and HMS Thrush ) and prepared a landing.

Khalid tried still shortly before the expiry of an ultimatum with the intervention of the US ambassador to the Sultanate of negotiations to obtain, but at 9:00 am, the British began building on the sea front, particularly the Sultan Palace and lying next to House of Wonders , with Shooting at ship guns. Eventually, British marines stormed and looted the palace area and the old fort . In view of the hopeless situation, Chalid soon applied for asylum at the German consulate and remained in exile in German East Africa until 1916 .