Hammerfest ( sami : Hámmárfeastta gielda ) is a municipality and city in northern Norway . 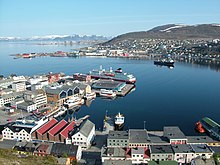 Hammerfest is located on the island Kvaløy in Fylke og Finnmark Troms . Hammerfest was sometimes considered the northernmost city in the world , at least until Honningsvåg (approx. 2000 inhabitants) received city status in 1998. The term “northernmost city in the world” is, however, controversial due to the lack of a uniform definition of the term “city”. In Norway alone there are other cities or settlements that are even further north, such as Honningsvåg and Longyearbyen on Svalbard , also with around 2000 inhabitants. Regardless of this, Hammerfest continues to advertise with the slogan “Europe's northernmost city”.

The municipality of Hammerfest also extends over parts of the islands of Sørøya (northeastern half) and Seiland (northern part).

Description : A white polar bear standing in red , a three-towered golden wall crown above the shield .

Hammerfest received its town charter on July 17, 1789. The town is named after an old ship landing stage. The first part of the word, "hammer", refers to the mooring options for boats and ships at the "Berghammer"; the second stands for “mooring” the boats. With Vardø (1798) Hammerfest is the oldest town in Northern Norway . 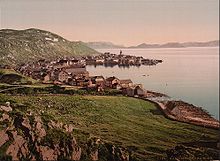 In 1807 northern Norway was ruled by Sweden , which is why Hammerfest was drawn into the Fourth Coalition War and attacked by British warships in 1809 . After a short bombardment, the residents capitulated; the British took the place and plundered it. After the conquerors withdrew in 1810, the Hammerfest set up a defensive hill (skansen) with cannons. The bulwark can still be seen today in the port entrance. Until the turn of the 19th century, the place was primarily important as a port of call for whale and seal hunters as well as in barrel production and in the coastal trade of the Pomors . Hammerfest was the starting point for Fridtjof Nansen's expeditions . The last crew members of his Fram were hired in Hammerfest.

During the Second World War , Hammerfest was used as a supply port by the German Navy . Before the end of the war, Hammerfest, like other occupied port cities in the north of Norway, was forcibly evacuated by German Wehrmacht troops and then completely destroyed in order not to leave a functioning infrastructure for the approaching Soviet troops ( principle of scorched earth ). The burial chapel was the only building that remained. Most of the 50,000 or so evacuated people in the former province of Finnmark were brought to Tromsø by boat and from there they were sent further south and housed with other people. The government- in- exile in Norway called on the population on the radio to oppose the evacuation, which is why around 25,000 people evacuated it and instead sought refuge in mountain caves. They had to spend the winter there without the help of the Allies, which is why the request by the government in exile was later criticized.

After the war ended, most of the citizens initially lived in barracks. In the 1950s, the villages and towns in Northern Norway were completely rebuilt. The reconstruction of the largely burned down province of Finnmark became an important task for all of Norway and large sums of money were donated for the reconstruction. Trondheim, for example, financed part of the new Hammerfest town hall. During the reconstruction, great attention was paid to a modern design of the buildings, which was also at the expense of the Sami and Kven cultures. The reconstruction was completed around 1960. The last barrack in Hammerfest stood until 1972, however. The new city map is similar to the old one. In the 1960s, new districts emerged.

There were several noticeable increases in population in the municipality. After the end of the Second World War, many new citizens came to the newly built area until around 1980. In 1992, with the incorporation of Sørøysund, the number of inhabitants rose from 6940 to 9410. At the beginning of the 2000s, there was a renewed increase due to the start of production in the Snøhvit gas field and the discovery of the Goliat oil field .

Since the city is north of the Arctic Circle , the sun does not set between May 19 and July 26, while in winter it does not rise from November 22 to January 21. Not least because of the long winter nights, the city was one of the first in Europe to have electric street lighting in 1891 .

Overall, the city's climate is subpolar in accordance with its location , but is significantly softened by the Gulf Stream . As a result, there is precipitation on more than 200 days per year. In winter, temperatures are around -5 ° C or a little below, but the sea remains ice-free. In summer, temperatures rise only slowly above 10 ° C, the warmest month is July with daily highs of 13-14 ° C.

The most important branch of production is fishing , previously also whaling . In addition, Finnmark University of Applied Sciences opens up prospects for young people in numerous training professions.

On the island of Melkøya off Hammerfest, the international Snøhvit consortium, headed by the Statoil - Norsk Hydro group, has built Europe's largest natural gas liquefaction plant (LNG). This will create around 350 jobs in Hammerfest. From the island of Melkøya, the natural gas from the Snøhvit field and other gas fields in the Barents Sea is to be transported to southern Europe and the USA by tanker. The plant, whose processes and a large part of the engineering were supplied from Germany, was completed in autumn 2007, but was not yet fully operational in February 2008 due to technical difficulties. The factory is a symbol of the dawn of the energy industry in the Arctic.

Additional expansions, including a refinery that taps into the oil-bearing Goliath field, are being planned at the Norwegian Statoil Group.

In the port of Hammerfest the ships dock on the Hurtigruten . The local ferry and bus company FFR uses the catamaran high-speed boats to serve the settlements on the surrounding islands and the neighboring communities with regular bus connections. The Hammerfest airport used by around 150,000 passengers per year (as of 2012). It has one of the shortest runways (880 m) approved for scheduled flight operations. The airline Widerøe serves him several times a day with De Havilland DHC- 8-100 planes. The place is connected via the R94 with the E 6 approx. 58 km away . There is no railway connection. 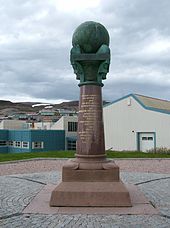 In 2011, the German feature film Gnade , with Jürgen Vogel and Birgit Minichmayr in the leading roles, was filmed on original locations in Hammerfest.