Finnmark ( German  "field of seeds " , North Sami Finnmárku , Finnish ( Kven dialects ) Ruija ) is a former Norwegian province, which on January 1, 2020 became the province of Troms og Finnmark . Before that, it was the largest in terms of area and at the same time the most sparsely populated administrative district ( Fylke ) in Norway with just 1.5 inhabitants per square kilometer . The district was in the extreme northeast of the country and had Norway's only direct border with Russia . 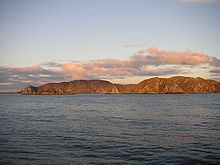 The rocky coast of Finnmark to the Barents Sea

The administrative area is known u. a. bird watching on the Varanger Peninsula to the east. This region is one of the most important bird areas in Norway.

Almost half of all Norwegian Sami (Sámi) , the members of an ethnic group who immigrated to northern Scandinavia about 10,000 years ago , also live in Finnmark . In Norway today there are officially 11,500 adult Sami who are eligible to vote for the Sami Parliament (according to the Samemanntallet ), but more than 60,000 adult residents are Sami.

Location of the municipalities in the province of Finnmark

Finnmark has been populated for around 10,000 years. The Sami are the oldest known population group still living here today. Traces of the Komsa culture (rock paintings near Alta), a reindeer hunter and fishing culture, can be found from the early days .

Finnmark is documented as Norwegian even before 1000 AD. From the 13th century until the end of the 15th century, Northern Norway was exposed to the Karelian raids . From the 14th century onwards, there was greater Norwegian immigration . The oldest church in Finnmark, the Church of Trondenes, is believed to date from the 15th century . The region was firmly integrated into the European trading system at an early stage. Trade led many foreigners to the north. The inland Sami traded fur eastward with the Kola Peninsula and the Baltic States . Sami on the coast participated in the Hanseatic trading system . A lively international coastal culture quickly developed on the coast.

From 16./17. In the 19th century, when nation- states formed in Europe , the interest of Sweden , Denmark and Russia in territorial control of Finnmark grew . The coast of the region should serve as a starting point for the control of trade routes to Russia and the Far East. From 1611 to 1613 Denmark and Sweden waged the Kalmark War , at the end of which Finnmark fell under Danish sovereignty.

The colonization of Sami areas by the Norwegians began in the 18th century. Nevertheless, Hammerfest remained a multilingual city for a long time. In the 19th century there was a clear economic development. 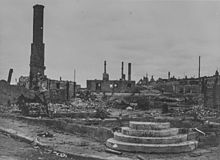 The center of Kirkenes after the German withdrawal

In the 1920s and 1930s, Finnish fascist movements worked towards the incorporation of the Finnish-speaking areas of Finnmark into Finland.

After the German occupation of Norway in 1940 , the governor of Finnmark, Hans Gabrielsen (1891–1965) tried to withdraw some of the Norwegian troops from the Germans and deploy them on the Narvik Front against the invaders. After the surrender of the Norwegian troops on June 10, 1940, he was sent to the German concentration camp Grini near Oslo. As part of the Nordlicht company , the complete and ruthless deportation (forced evacuation) of 50,000 people and the destruction of all accommodation east of the Lyngenfjord by the Wehrmacht took place in 1944 . Another 25,000 people were able to evade deportation and fled to the mountains. Were destroyed u. a. 11,000 residential buildings and 350 bridges.

Merger of Finnmark and Troms

For several years, as part of an administrative reform, there have been plans to merge the county of Finnmark with the neighboring county of Troms to form a new county of Troms og Finnmark . This project met with considerable opposition in Finnmark. On March 15, 2018, Finnmark's Fylkesting (district assembly) voted 21 against 11 against the planned merger and voted for a referendum on this issue with only 4 votes against. The referendum on the merger of Finnmark and Troms was held in Finnmark on May 14, 2018. Of the 59,625 eligible voters, 87% voted against the merger. The turnout was 58.5%. On January 1, 2020, the merger to form the province of Troms og Finnmark was completed.

Map with all coordinates of the air traffic section : OSM

Finnmark had eleven airports in 2009,

There was no railroad in Finnmark.

The European route 6 crossed the entire Finnmark and roughly followed the course of the coast. This is only not the case between Lakselv and the Varangerfjord. Several European roads branch off from the E 6 in different directions.