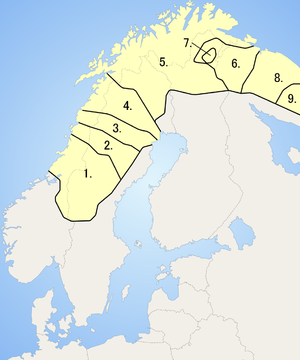 Distribution area of ​​North Sami (No. 5) in the Sami language area

North Sami (also Saami, Sámi; own name davvisámegiella ) is by far the largest language from the group of Sami languages . This makes it part of the Finno-Ugric language family. North Sami is spoken by 15,000 to 25,000 Sami in the Norwegian , Swedish, and Finnish parts of Lapland .

North Sami is recognized as a minority language in the municipalities of Kåfjord , Karasjok , Kautokeino , Lavangen , Nesseby , Porsanger and Tana in Norway , Arjeplog , Gällivare , Jokkmokk and Kiruna in Sweden and Enontekiö , Inari , Sodankylä and Utsjoki in Finland and is permitted in communication with authorities.

In 1979 a uniform North Sami spelling was established. Before that, each country had its own spelling standard. The official spelling was last changed in 1985. North Sami is written in a variant of the Latin alphabet , which has the following 29 letters:

Northern Sami has five or six vowels , as <y> occurs in loan words. The <a> occurs in single length (<a>) and double length (<á>):

a: unrounded, open back vowel.

u: rounded, closed back vowel.

North Sami has the following 26 consonants :

With regard to word order , North Sami belongs to the group of subject-object languages ​​of the Urals language family. The agent and other subjects of transitive and intransitive verbs are in the nominative. The Patiens and other objects of transitive verbs, however, are generally in the accusative. The sequence of the main constituents (subject, object, verb, adverbial, etc.) is subject to almost no formal restrictions and is therefore quite free. The basic sequence is subject - verb - object (SVO):

The modifier is placed in front of the head within noun phrases:

From a grammatical point of view, the modifier is behind the head in numerical and verb phrases , so that here too the head bears the morphological properties that the syntactic construction requires. As the example below shows, when a numeral noun phrase is used as the subject, the numeral is the head and the noun is the modifier of the noun phrase.

Noun phrases are in the North Sami Islands. However, they can be intersected by external elements such as verbs or sentence modifiers.

Relative clauses that are linked to the antecedents of the main clause by a relative pronoun:

In contrast to noun phrases, verb complexes such as compound tenses or other verb complexes consisting of a finite and an infinity verb form do not form a phrase in the actual sense. Elements in between are tolerated and word order is free. Verb complexes made up of finite and infinite verb forms, however, show the usual hierarchy: the infinite form is formally subordinate to the finite form.

In North Sami, the subject is not a constituent that has to be realized. In some cases the realization of a formal subject is even ungrammatic. First and second person verb forms need not be used in conjunction with a subject pronoun. Third person pronouns are optional for subordination:

If a natural phenomenon is described, one generally does not use a formal subject:

The same applies to other plosives or generally other consonants. The nom. Sg. Áhčči 'father' has as Gen. Sing. Áhči , the nom. Sg. Eadni 'mother' a gene. Sg. Eatni , next to a nominative sávdnji 'seam' there is a genitive sávnnji , next to a nominative muohta 'snow' in the weak level there is a genitive muohttaga in the strong level. These alternations are also present in the verb: for the infinitive juhkat 'drink' there is a 1st person singular in the present tense jugan 'I drink', for the infinitive doaivut 'hope' there is a 1st P. Sg. Pres . Doaivvun 'I hope'.

In some cases all three quantity levels can even alternate. This occurs, for example, with some verbs, for example: oađ'đi '(you two) sleep!': Oađđit 'sleep': oađán 'I sleep'. But also between jiegŋái 'iced, frozen', jiekŋa 'ice' and jieŋa 'of the ice' there is a threefold quantity opposition .

North Sami has seven cases : nominative , genitive , accusative , locative , illative , comitive and essive . The genitive and accusative have the same form, so the number of cases is sometimes given as six.

The noun inflects in two numbers, the singular and the plural. In contrast to the pronouns and the verbs, there is no dual here. The morphological marking usually takes place at the end of the word as a suffix. A distinction is made between markers (modality, time, number), inflexional suffixes (case, possessor, person) and derivation endings (modified word meaning). The following sequence of suffixes applies: word stem - derivation ending - number marker - case suffix - possessor suffix - enclitic (for example question-enclitic).

In addition, a distinction is made between an absolute declension and a possessive declension, with personal suffixes being appended to the noun in the respective case. So guos'si just means 'guest', while guos'sán means 'my guest', guos'sát 'your guest' and so on. In addition to singular and plural, the possessive declension also distinguishes between the dual ( guos'sáme 'my two guests', guos'sáde 'your two guests' etc.).

In North Sami there are personal, reflexive, relative, indefinite and demonstrative pronouns. The morphology of the pronouns largely corresponds to that of the nouns. However, some pronouns have a monosyllabic word stem, whereas word stems of nouns are at least two-syllable (exception leat , sein). The personal pronouns appear in three numbers : singular (singular), dual (two-number) and plural (plural).

Flexion paradigm to don , you:

The reflexive pronoun is always provided with the possessive suffixes in the oblique cases :

Eating Sg: iehčanis 'he / she himself'

Like most languages ​​that belong to the Finno-Ugric language family, North Sami also has no determiners. Mostly, instead of articles, demonstrative pronouns are used that express proximity or distance to the speaker or listener.

Some adjectives in the North Sami language have a separate form that is used when the adjective is used in an attributive construction. Based on the various forms of realization of this attributive form, adjectives are divided into three different groups.

1. Adjectives that do not have a separate morphological attributive form

2. Adjectives that have a separate morphological attributive form

3. Adjectives that have no attributive form

The North Sami verb is conjugated in three persons and three numbers (singular, dual, plural). It has two simple (past and non-past) and two composite ( Perfect , Past Perfect ) tenses and four modes ( indicative , imperative , conditional and potential ). Furthermore, a distinction is made between two genera verbs ( active, passive ). Like the other Sami languages, Finnish and Estonian , North Sami uses a negative verb.

There are also several infinite forms. The division here is as follows: infinitives, connegatives, participles, and gerunds.

All verbs have at least two-syllable word stems (exceptions leat , sein and in , negative verb). There are no forms in the conditional or potential or past tense for the negative verb.

In addition to the two simple tenses, present and past, there are two more compound tenses, perfect and past perfect. With the help of a copula , which is in the present perfect tense and in the past perfect past perfect, and the past participle these are formed. The tenses are a means of expressing different aspects . The following rules of use apply here:

1. Past (absolut past): completed events that lie in the past

2. Perfect (relative past): Events that started in the past and extend into the present / future

3. Past perfect: expression of prematurity in the past

There is also the option of describing particularly complex time structures using the double perfect or past perfect.

The North Sami language has no future tense. Often the potential, which is otherwise used to express expected events, serves as a substitute form. As a rule, the conditional expresses wishes, unrealized events or desirable circumstances (e.g. when the sun would shine, ...).

There are three classes of intransitive verbs:

1. In intransitive verbs that describe weather phenomena, no subject is used:

2. intransitive verbs that take a subject:

3. intransitive verbs that take a subject and a complement:

1.Transitive verbs that take an object:

2. transitive verbs that take an object and a complement:

The negation of sentences in the simple past is formed by the finite negation verb in combination with the infinite past-connegative.

The negation concerns the verb in North Sami and therefore mostly takes Scopus over the entire event that is connected with the verb. However, it is possible to limit the scope to one constituent:

In participle and infinitive constructions, the matrix verb is negated. The scope of the negation, however, only covers the embedded sentence:

Nordsámi differentiates between active and passive. The passive has two functions: It makes it possible not to realize the agent or the logical subject of the verb. For the same reason it is used in intransitive verbs ( e.g. el'lojuv'vui - Sg.3.Per.Verg.Pass., Life went on, literally: it was lived). The passive form of a verb can be recognized by a marker attached to the stem as a suffix. The marker -ojuv'vo (j) - is used for two-syllable stems, the marker -uv'vo (j) - for three-syllable stems . Both markers are to be heard like gul'lot , inflected (see conjugation paradigm above).

The North Sami language distinguishes between a number of infinite verb forms. The infinitive, the gerund, various action forms, the supinum and the present participle or perfect have different roles in infinite constructions:

The infinitive is mostly used as an argument for other verbs. The finite verb forms the head of the construction here:

The action essive is used in verbs of immediate observation:

The past participle is used to express that the event in the embedded sentence has ended:

The gerund is used as a temporal adverb and takes an argument in the genitive:

In those cases in which the infinitive construction realizes the object, the constituents that represent the nominative subject and the nominative complement of the embedded sentence are in the accusative.

If the subject of the embedded sentence is koreferent with that of the matrix sentence, it is represented by the possessive accusative form of the reflexive pronoun iehča- :

Questions start with a focused phrase. Usually this consists of the question word:

The answer to decision-making questions consists either of repeating the focused phrase with modified personal endings or the negative verb in :

In negative sentences, the coordination can also be expressed by a clitic particle -ge , which is attached to the negative verb in :

There are a number of subordinate conjunctions: ahte that, go as, that, juos if, vai ~ vuoi with it, amas with it, etc. Subordinate sentences can have different functions in the sentence:

There is also Ávvir , a newspaper published in Finland, Sweden and Norway .

The first book printed in North Sami is a translation of Martin Luther's catechism from 1728. The author of this translation was Morten Lund , a Danish priest who worked as a missionary in Overhalla . It was very important to him to speak their mother tongue with the Sami and he learned it intensively. His Sami translation of Martin Luther's catechism, entitled Doctor Marten Lutter Utza Katekismusaz, was completed in 1724, but was only published in Copenhagen four years later as a bilingual edition .

The first North Sami grammar was published in 1748 by Knud Leem .

The first secular book in North Sami is the well-known book by Johan Turi Muitalus sámiid birra , also bilingual in Copenhagen in 1910 , which was also published in German two years later as "The story of the life of the rag".