The title of this article is ambiguous. Further meanings are listed under carrot (disambiguation) .

One green carrot. Cross sections through the root

The designation carrot or carrot for the plant as well as the beet differs from region to region: In northern and eastern Germany carrots predominate, whereas in southern Germany young beets are called carrots; Varieties with small, spherical roots are known throughout Germany as carrots. In northern Germany, preferably in Lower Saxony and the surrounding area, the term root (in Dutch word ) can also be found on the markets and in everyday language . In Sater Frisian , the carrot is also called wuttel, while the name Räiwe is used more for other types, for example for the Hederich ( Räiwe / Wüülde Räiwe ) or the turnip ( Räiwe / Stäkräiwe ). The term yellow turnip is often used in Baden, Swabian, Franconian and Bavarian , as well as in Saarland and Palatinate, from which Gelleriwe or Gelleriebe in Baden is derived. In Austria, carrots predominate in High German, while common names in German-speaking Switzerland are Rüebli (half-long orange type) and Feldrüebli (yellow turnip).

The linguistic development in Germany is moving towards "carrot" and "carrot".

The term "carrot" is derived (via folk Latin carotta ) as well as the English, French and Italian names from the Latin word carota (and this from the Greek karōtón , plural karōtá "carrots").

The word "carrot" contains the term for root which is also used in other Germanic as well as in Slavic languages ​​and in Greek. The word developed from the old and Middle High German names moraha , morha , mokra, morke , morhe and more from an synonymous Germanic word ( morhōn ) which, like Greek tà brákana , "wild growing vegetables", probably in Indo-European mṛk , "edible root “Is based.

Double-gold inflorescence from above

Habit of a flowering plant in the second year

The carrot is a biennial herbaceous plant , but - except for seed production - is only cultivated as an annual. In the first year it forms a basal leaf rosette from double to triple pinnate leaves and a taproot . This thickens in the course of growth and thus becomes a storage organ. In the second year the stem axis elongates, the leaf rosette is dissolved and a branched, leafy, flower-bearing stem emerges .

Reserve substances are stored in the taproot. The taproot consists of the crown (head), the bark (bast), the cork layer , the inner pith (the "wooden part") and adventitious roots emanate from it.

Most of the ingredients are found in the taproot's bark. In breeding , therefore, a high proportion of bark and a small, delicate "piece of wood" has always been aimed at. There is less carotene in the pulp , the central cylinder, which is why it is lighter than the bark, the sucrose content is lower and the nitrate content is higher. Depending on the variety, the beet can be long, half-length, short, cylindrical, circular or conical, each with pointed or blunt ends. Color variants are light or dark red, orange, white and purple. The color depends on the variety, the culture conditions and the weather. The color is due to carotenoids, anthocyanins and chlorophyll . 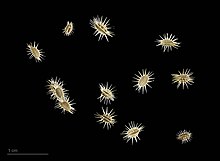 In the second year, the richly branched stem develops, which carries the inflorescences and reaches heights of up to 150 cm. The flowering period begins in June. In doppeldoldigen inflorescence there are many flowers. The flowers are mostly hermaphroditic and can also be sterile or partially sterile. They are cream in color. Cross-pollination , which is carried out by insects , predominates . The formation of the inflorescences can also be triggered in the first year by a cold stimulus ( vernalization ) of 1 to 10 ° C after the youth phase.

The partial fruits are oblong oval. They are covered with fine hairs on the outside. In Central Europe they ripen between August and September. The thousand grain weight is 0.8 to 1.8 g.

The table on the right shows average values, which can vary greatly depending on the type of cultivation and variety. In addition to the values ​​given, the carotene content (predominantly α- and β-carotene, "provitamin A") is important; it is the highest among all vegetables. Depending on the variety and growing conditions, it is between 5 and 30 mg per 100 g of fresh substance. In addition to the sugar content, the essential oils and fruit acids are responsible for the taste . The latter is dominated by malic acid , followed by citric acid , quinic acid , succinic acid and fumaric acid .

Carrots grow best in deep, stone-free sandy soils or sandy loam soils and on loess with a permeable subsoil. The optimal pH value is between 6.5 and 7.5. The cultivation takes place from the temperate zone to subtropical areas, but the best yields are achieved in cooler areas with average daily temperatures between 16 and 18 ° C. In the crop rotation, a three-year gap to other umbelliferae should be observed, and longer if infested with nematodes .

Those that are fertilized with manure are suitable as previous crops. The reason for this is that the higher the organic matter content in the soil, the better the yield and the yield security of the carrot as well as the content of ingredients. Good combinations in the crop rotation result with field forage plants (with the exception of alfalfa and red clover as hosts for root gall nails), with legumes and cabbage species. With regard to the nitrate content, grain is a good previous crop.

The carrot's nitrogen requirement is very low compared to other vegetables. However, it needs a lot of potassium and is sensitive to calcium. Important micronutrients are magnesium , boron , copper and molybdenum .

Depending on the development time of the carrots and the harvest date, a distinction is made between several cultivation methods:

In the case of fresh carrots, bed cultivation predominates. In areas with high groundwater levels such as the Netherlands, the carrots are grown on dams.

The carrot has been cultivated intensively since around 1900. There are around 300 varieties across the EU. With the help of hybrid breeding , a heterosis effect could be used, in particular to achieve the balance of the root shape, color and size, to increase the ratio of pulp to bark and to increase the sugar and carotene content. Farmers and gardeners cannot harvest such hybrid seeds themselves, but have to buy them from international seed manufacturers for each sowing.

According to the Food and Agriculture Organization FAO, around 40 million tonnes of carrots (including turnips ) were harvested in 2018 .

The following table gives an overview of the 10 largest producers of carrots worldwide, who produced a total of 68.2% of the harvest. (The values ​​for Austria and Switzerland are given for comparison.)

In Europe, almost three times as many tomatoes were harvested as carrots in 2018. The largest growing countries in Europe in 2018 were the United Kingdom, Poland, Germany, Italy, the Netherlands and France. In Switzerland carrots are the most consumed vegetables; In 2017, 7.9 kilos of it were eaten per capita. In Switzerland, carrots are grown on around 1,900 hectares, almost 350 hectares of which are organic .

The beet of the carrot plant is consumed raw, cooked, as juice or preserved, the preservation takes place as wet , frozen or sour preserves or as a dry product. The leaves of the carrot can also be eaten or used as feed for animals, rabbits in particular like to eat them.

The high content of carotene, vitamin C, potassium and iron should be emphasized from a nutritional point of view. The carrot is particularly important in the diet of toddlers and toddlers as well as in diet cuisine. Carrots are beneficial for the formation of blood and teeth as well as for the natural resistance to diseases. Carrot juice has a regulating effect on gastric juice secretion. Their potassium content has a diuretic effect . Carrots are also used for digestive disorders in small children, the slightly constipating effect is based on the high pectin content and the slightly bacteriostatic essential oils.

The differently colored carrots come from different tribes of origin: the white ones come from the Mediterranean region, the yellow ones from Afghanistan , as well as the red-violet forms. The cultural form is likely to have emerged from crossing all three forms in their overlapping area in Asia Minor.

Vienna Codex of the Dioscurides on sheet 313r

The oldest evidence of the use of wild ( Daucus carota L. ) and cultivated (( Daucus carota subsp. Sativus Hoffm.) Schübl. & G. Martens ) carrots comes from ancient Greece and Rome. Around 60 AD, Dioscurides called the wild carrot staphylinos and mentioned its use as a medicinal plant (against ulcers, menstruation-promoting, fruit-killing, against pleurisy, edema and poisonous substances as well as urinary retention). It is more effective than the plants grown in the garden. The illustration in the 6th century edition of Dioscurides is the oldest known illustration. Dioscurides also mentions that the Romans called staphylinos carota and pastinaca . With Roman authors, it is often not clear whether they write of the carrot or the parsnip due to the variety of names and also the Cretan eyelid ("Daucus cretensis") and other umbellifers come into question.

In the 10th century, red-violet and yellow carrots were grown in what is now Iran, and in the 12th century these came to Spain and on to Italy. The red-violet carrot was grown in France and Germany until the 19th century, but the yellow beet had dominated Europe since the 16th century . Even after the orange-colored carotene carrot was established, it was cultivated as a fodder for a long time.

In Central Europe, archaeological evidence of carrot cultivation is difficult because the wild carrot is widespread, especially in meadows and along roadsides. Early written mentions from the 9th to 12th centuries cannot be differentiated with certainty from parsnips, such as in the Capitulare de villis of Charlemagne or in the writings of Hildegard von Bingen . The oldest unequivocal description comes from Albertus Magnus in the 13th century, who called the plant daucus and named its characteristic feature of the darker central flower .

It is often mentioned in the herbal books of the 16th and 17th centuries. For example, Hieronymus Bock calls them Geel in 1539 and raw beets . Joachim Camerarius called the Carota in 1586 "welsch". It should have been a cultivated form that had not long since reached Germany from France or Italy. Carrots came in many different colors, so in 1684 Johann Sigismund Elsholtz named yellow, white, red and black and red carrots.

Orange-colored carrots may have originated in the Netherlands. In any case, the first evidence for this are Dutch paintings from the end of the 17th century: Pieter Aertsen , Fruit and Vegetable Stand , and Nicolaes Maes , A Market Scene in Dordrecht . In the 18th century, carrots in the Netherlands were divided into two groups: long orange-colored (known as Brunswicker in Germany), and smaller, intensely orange-colored horned carrots. The first descriptions of the orange carrots date from the beginning of the 18th century.

Baby carrots have also been on the market since the 1970s; contrary to popular belief, this is not a special breed. Usually baby carrots are shredded, cut into shape, common carrots.

Commons : Carrot as a theme  - collection of images, videos and audio files