In the past, Frisian and English were often combined in one Anglo-Frisian language group. Today, English and Frisian are usually classified together with the Low German language (and sometimes also the Dutch language) as languages ​​of North Sea Germanic (or Ingwaeon ) origin. Low German, which is genetically closely related to the Frisian languages, has already developed differently since Old Saxon times and has lost many North Sea Germanic features. However, Sater Frisian has been in close linguistic contact with the Low German dialects of the area for a long time.

Settlers from East Friesland , who had left their ancestral homes around 1100 probably under the pressure of natural disasters, established the origins of Sater Frisian in Saterland. Since some Saxon residents were already living in Saterland at that time, close language contact with Low German began at this time.

In the Frisian areas on the East Frisian Peninsula , the East Frisian language began to decline in favor of Low German as early as the early 16th century. The East Frisian dialect of the Saterland was able to be preserved mainly due to the geographic characteristics of the country: For centuries, the Sater Frisians had little contact with their neighbors due to the surrounding moors. The villages built on a sand ridge practically formed an island. Up until the 19th century, the inhabitants could be reached almost exclusively by boat via the Sagter Ems ( Seelter Äi ) river , and in rare cases, in extreme weather conditions, via the dried up or frozen moors.

Politically, the country did not belong to the county of East Friesland , which was established in the 15th century , but was subject to various dominions over time and finally came to the state of Oldenburg . The political and later mainly denominational border to East Frisia on the one hand - the Saterlanders had been re-Catholicized after the Reformation - and the tribal and linguistic border towards Oldenburg ensured additional isolation.

The 19th century - with the development of the Saterland through road construction, railways and the moor colonization - marked the beginning of the decline of the Sater Frisian language, but it was not until after the Second World War that the Sater Frisian language society, which was still quite closed, was broken up and Standard German became widespread . However, the extinction predicted a hundred years ago has not yet materialized. The absolute number of speakers remained relatively constant until the end of the 20th century, but the speakers of Sater Frisian are clearly in the minority in the community today.

Sater Frisian is still widespread in all four localities in today's municipality of Saterland. Stellmacher states on the basis of his 1995 survey that 39.7 percent of the residents of the village of Ramsloh (Sater Frisian Roomelse ) speak Sater Frisian, in Scharrel ( Skäddel ) it is 28.9 percent, in Strücklingen ( Strukelje ) 26.2 percent. In Sedelsberg ( Sedelsbierich ) , which was only settled in the 19th century , it is only 9.6 percent. The non-Frisian-speaking villages of Idafehn (municipality of Ostrhauderfehn ), Elisabethfehn (municipality of Barßel ) and Neuscharrel (city of Friesoythe ) are also located on historical Saterland land . From the beginning, the feudal settlements were mainly settled from Oldenburg and East Friesland and therefore hardly or not at all in Frisian. Neuscharrel emerged from Scharrel in the 19th century, but Frisian had a difficult time as in the Sedelsberg colony. At the end of the 19th century, Paul Kollmann still had 59 Frisian-speaking residents in Neuscharrel (12.7 percent). 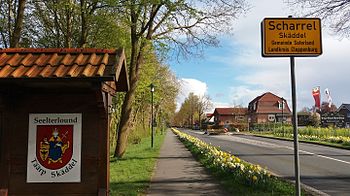 Since the European Charter for Regional or Minority Languages ​​came into force in Germany in 1999 , Sater Frisian has enjoyed special protection and the right to promotion as a recognized minority language. In Saterland, the language is also permitted for official use. The place-name signs for the four Saterland localities are marked in two languages. Around 300 children learn the language voluntarily in school and in kindergartens (see also: Frisian lessons in Germany ) . Sater Frisian has had its own slot on the local station Ems-Vechte-Welle since 2004 .

There is no separate ISO-639-2 abbreviation for this language gem; what applies to "other Germanic languages ​​/ dialects" can be used. The ISO / DIS-639-3 abbreviation is stq.

Sater Frisian can be divided into the three local dialects of Scharrel, Ramsloh and Strücklingen-Utende. The differences are small, however.

Sater Frisian is considered to be very conservative in its sound , just like all of East Frisian was conservative in relation to Old Frisian. The following information is based on research by Marron Fort.

The consonant / r / is often in Silbenauslaut vowel as [⁠ ɐ ⁠] realized.

Plosives: Voiced plosives today are usually hardened in the end . Especially with older speakers, however, there are still unhardened endings.

Sater Frisian has retained some noticeable lexical features of the East Frisian language. So the word for rich (“ reke ”) has completely displaced the word for give , also in the existential meaning (e.g. “ Daach rakt et Ljude, doo deer baale… ”, German “But there are people who speak there ... "). Another eye-catching word is " kwede " (to say) , which, in contrast to other Germanic varieties , has established itself in Saterland. In Old Frisian, “ quetha ” and “ sedza ” still existed side by side (compare “ Augustinus seith ande queth… ”, German for “Augustinus says and says…” and the English “quoth” for said ). Another word that was widespread in many West Germanic varieties in earlier language levels, but has only established itself as a commonly used term in East Frisian, is “ Soaks ” for knife (compare sax (weapon) ).

Sater Frisian has only recently become a written language . a. is documented in Sater Frisian literature . The German orthography system is only partially suitable for the appropriate reproduction of this language, which is rich in sounds. The numerous linguists who studied Sater Frisian used different spellings, some of which they had invented themselves, until the middle of the 20th century. The poet Gesina Lechte-Siemer, who published poems from around 1930, based her first works on the cultural historian Julius Bröring, who published a work about Saterland around 1900.

In the 1950s, Professor Jelle Brouwer from Groningen developed a spelling based on Dutch, but this did not catch on. The West Frisian Pyt Kramer , who has been intensively involved with Sater Frisian since the 1950s, developed a spelling around the principle of "one sound - one sign". The American linguist Marron Fort , on the other hand, developed Brouwers on the Dutch-based orthography. The biggest obvious difference between the spellings is the handling of long vowels. In Kramer, a long vowel is always marked with a double spelling (e.g. baale - "speak"), while in Fort long vowels are only written simply in open syllables, since vowels in open syllables are generally long. (e.g. bale ). For the most part, both spellings get by without special characters, only in Fort there is a long distinction from half-long vowels by an acute .

A de facto standard has so far not been able to establish itself. The numerous projects supervised by Kramer use his spelling, while Fort's spelling is used in his publications and is also officially recognized. The ongoing development of the spelling can be seen, for example, on the town signs for the village of Scharrel , which were previously labeled in Sater Frisian with skull , while the new spelling of the name is Skäddel .

Uus babe in a heemel

Let your will be born,

The Saterland has been the destination of explorers again and again since the early 19th century because of its remoteness and the resulting peculiarities. The anthropologist Mauritz Detten, who visited the Saterland, wrote about the Saterland as early as 1794. He described their language as “a German of its own, which, at least in part, is apparently rotten Low German” and recorded a few words. The preacher Johann Gottfried Hoche was more detailed in his travel description Journey through Osnabrück and Niedermünster to Saterland, East Friesland and Gröningen, which appeared in 1800 . He devoted an entire chapter to the language and testified there his opinion that he considered Sater Frisian to be the "oldest [dialect] in Germany and the mother of English, Dutch, Old Saxon or Low German".

In 1836 the work Onze Reis naar Sagelterland by the two West Frisians Hettema and Posthumus appeared, which contains extensive collections of words. Overall, the work is more romantic and imaginative and not very scientific. In 1846 the theologian Johann Friedrich Minssen from Jeverland visited Saterland for several months. He described the language very precisely and collected many stories and proverbs in the Sater Frisian language. He published some of his research in the journal Friesisches Archiv ; most of his records were only found and published after the Second World War.

Research into Sater Frisian after World War II is inextricably linked with the names Pyt Kramer and Marron Curtis Fort . The West Frisian engineer Kramer published a Sater Frisian dictionary at the age of 25 (1961), and in 1992 the first volume of a new dictionary. In 1982 he published a short grammar of Sater Frisian. In addition to his extensive research, Kramer was mainly active in language maintenance . From 1966 to 1972 he published the Sater Frisian magazine Seelter Trjoue and other works, including: a. Minssen's rediscovered writings.

The American Germanist Marron Curtis Fort began his studies in Sater Frisian in the 1970s and eventually headed the Low German and Sater Frisian department at the University of Oldenburg until 2003 . Together with Hermann Dumstorf, he created the Sater Frisian dictionary , which appeared in 1980. He also edited the text collections Saterfriesisches Volksleben (1985) and Saterfriesischeimmen (1990) and translated the New Testament and the Psalms into Saterfriesian (2000).