The old Frisian language (in older works also simply Frisian or Frisian ) is the common forerunner of the modern Frisian languages . It is handed down in legal books and documents from the 13th to 16th centuries from the area between the Weser and IJsselmeer ( Zuiderzee ).

The Old Frisian language has a rather ancient form and can therefore be placed on the same level of development as Old English , Old Low German or Old High German , even if it was written at the same time as Middle English , Middle Low German and Middle High German .

Comparison with other West Germanic languages

In the following, some Old Frisian words are compared with related equivalents from other West Germanic languages .

Old Frisian went through several sound developments together with Old English , while Old Low German occupies an intermediate position between High German (on the one hand) and Old Frisian and Old English (on the other hand).

Similarities with the Old Norse

Interestingly, there are features in Old Frisian that North Germanic also has, but not Old English or Old Low German. Examples:

Similarities with neighboring languages ​​in the south

Old Frisian also has similarities with other West Germanic languages ​​that cannot be found in Old English. One example of this is the lack of Rhotazism . Rhotazism here is the transition from s to r (named after the Greek letter name Rho , "R"). This missing transition from s to r can be found in the Old Frisian word hasa (Old High German haso , New High German Hase ). In Old English, however, this word is hara , in New English hare .

The old Frisian texts use the Latin alphabet without additional letters. For the dental fricatives one wrote th (as in modern English). See Voiced Dental Fricative and Voiceless Dental Fricative . For the u vowel and the consonants v and w , u , v and w were written quite randomly . See also U , V and W . The spellings for k and c were also pretty much arbitrary. The sounds i and j were both usually written as i . The length of a vowel is only given in West Frisian (i.e. younger) Old Frisian texts, namely by double written vowels, e.g. ee for the long e . In some cases , oe for long u was also written, following the Dutch model . In modern editions of Old Frisian texts the length of a vowel with a horizontal line or a circumflex is above the grapheme specified, as in AGE or age ( "eye"). See also edition guidelines .

In the past, research assumed that the differences between the two Old Frisian language forms were not chronological (older versus younger), but dialect differences (east versus west). Because Frisian was superseded by Low German as a written language in Groningerland and East Frisia , there are no more Old Frisian manuscripts from these areas from 1450. More recent manuscripts come from the area of ​​today's Dutch province of Friesland . The younger Old Frisian was therefore Altwestfriesisch called the older Old Frisian Altostfriesisch . 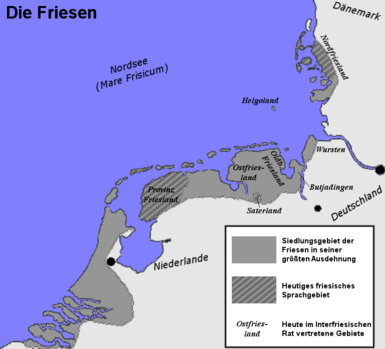 Largest expansion of the Frisian language area in the 7th century

Frisian was spoken in a much larger area in the Middle Ages than it is today. According to Klaas Fokkema, the following areas belonged to the medieval Frisian language area:

The graphic opposite shows the Frisian language area with some deviations, especially in the river delta of the Rhine and Maas, and in South Holland. The discrepancies result from the fact that the graphic shows the largest expansion of the Frisian settlement area in the 7th century (the Frisia Magna ), which was reduced again soon afterwards by the expansion of Franconian rule.

It is not even clear whether Frisian was actually spoken as the mother tongue throughout the Frisia Magna ; possibly it was only superficially dominated by Frisians in the peripheral areas in question or occasionally populated by Frisians and Frisian was at best the lingua franca there.