Rasmus Christian Rask (born November 22, 1787 in Brændekilde (island of Funen ), † November 14, 1832 in Copenhagen ) was an important Danish Indo-Europeanist and polyglot . He spoke 25 languages and dialects ; he had studied more than 50.

Rask turned to the study of Nordic and other related languages early on. After a study trip to Iceland, he published the work Undersøgelse om det gamle Nordiske eller Islandske Sprogs Oprindelse in 1818 (German: investigation into the origin of the Old Norse or Icelandic language ). In this he postulated a relationship between Germanic, Latin, Slavic and Greek. He had already finished his work on this four years earlier, but Franz Bopp published his "Conjugation System" in 1816 , so that his work no longer received the expected attention in the professional world.

In order to study the more distant relatives of the Thracian languages , he went on a trip to India from 1816 with financial support from the royal family. It led via Stockholm, Petersburg, Moscow, Astrakhan, Tbilisi and Persia to Bombay (1820) and Ceylon . Here he was able to acquire valuable Pahlavi and Pali manuscripts. On his return to the University of Copenhagen in 1823 he was appointed professor of literary history, later of oriental studies . In 1825 he founded the Nordic Altschriftgesellschaft together with Carl Christian Rafn .

In 1823 Rask drafted a posterior planned language , which, however, was only published from the estate and which did not influence the later discussion. The peculiarity lies in the modern argumentation of Rask for a planned language as well as in the early point in time - only in the second half of the 19th century there was a wave of planned language projects.

His in-depth and systematic investigations into the Norse language according to syntax and phonology provided evidence that they are closely related to the other Germanic, but also to the Slavic and Baltic languages, as well as to Latin and Greek.

The German linguist Jacob Grimm became aware of this work (1811), which was written in Danish. Letters, reviews and numerous references testify to Rask's influence on the Brothers Grimm, who planned the joint edition of the Edda songs with him, but the relationship between Grimm and Rask remained tense. Jacob Grimm also took up Rask's results on the first sound shift in his German Grammar, "in which he presented and exemplified this sound law in more detail than Rask". That is why the so-called “ Grimm's Law ” is also called “ Rask's Grimm's rule ” by some scientists . Rask's work on the Zend language was also groundbreaking , in which he demonstrated that the Parsing language is closely related to Sanskrit . Even before his untimely death, Rask was able to deal in detail with the Ural-Altaic and Caucasian language families . 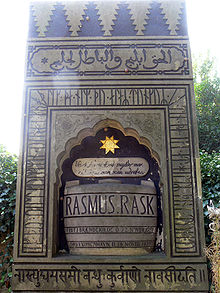 On one of his numerous trips he was accepted into the League of Freemasons in Ceylon . He is buried in the Assistens Cemetery in the Nørrebro district of Copenhagen.