This article describes the ethnicity - for the IT verb parsen see parser . 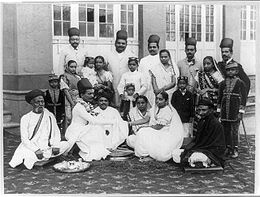 Historical picture of a Parsenian wedding 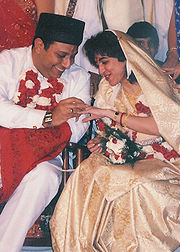 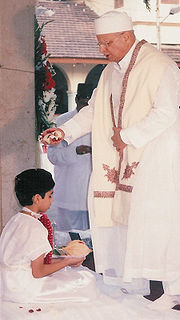 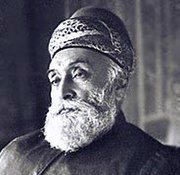 The Parsees (from Persian پارسى, DMG Pārsī , ' Persians ') are an ethnic-religious group originally from Persia who follow the teachings of Zoroastrianism and live as a strictly closed community . Most of the parsees are in India and Pakistan . The Persian followers of the god Ahura Mazda commonly refer to themselves as Zoroastrians ( Persian زردشتى, DMG Zardoštī or alsoزرتشتى, DMG Zartoštī ).

According to a legend , the Parsees originally came from Khorasan in the Iranian highlands , from where they fled to India in the 8th century after the fall of the Sassanid Empire and the subsequent Islamization of Greater Persia. According to tradition, the Indian east coast cities were sand Chan and Naosari founded by the parsing that this by cities Sanjan at Merv in Turkmenistan and Sari in the province of Māzandarān named their Iranian origin country.

The number of parsing is difficult to estimate, often 90,000 people are given. According to a 2003 article, the number of Parsis (Zoroastrians) worldwide is 200,000. After the withdrawal of the British in 1947, many Parsees emigrated from India. According to the census , around 57,000 Parsees lived in India in 2011, 45,000 of them in the state of Maharashtra , where Mumbai is the most important center of the Parsees, and almost 10,000 in Gujarat . This tolerance, quite cosmopolitan and mostly educated and wealthy community is valued for its charitable work . The number has been falling for years due to the low number of children and the fact that one can only be born as a Parse - the Parsees do not allow converts and until recently did not take in children from mixed marriages. Singleness and childlessness are socially accepted among the Parsees and around 30% remain unmarried for life. The number of children per woman in the Parsees is 0.8 (the Indian average is 2.3). The Indian government therefore started an initiative in 2015 to encourage the Parsees to have more offspring. Among other things, state funding for in vitro fertilization for unwanted childless couples is planned. This is in contrast to the general population policy which aims to curb population growth in densely populated India. In support of this, the Indian Minister for Minority Affairs Najma Heptulla said that the Parsees had made extraordinary contributions in India to education and industrialization. Many people, like the industrialists Tata and Godrej , as well as important judges and politicians belong to them. This population policy appeared to be showing its first signs of success two years after it began.

An estimated 18,000 to 25,000 Parsees live in North America. The worldwide diaspora is comparatively small. In the west, the Parsees are also known for their burial structures, the dachmas . In a newspaper article in 1907/1908 Friedrich Schrader described the Parsian cult sites in the Baku area in Azerbaijan .