The title of this article is ambiguous. Further meanings are listed under legend (disambiguation) .

The legend is a type of text or literary genre related to fairy tales and sagas , in which historical events were exaggerated and / or falsified by later additions.

The term is derived from the medieval Latin expression legenda , which means something like “that which is to be read”, “what is to be read ” or “the pieces to be read ”. The origin of the term thus indicates - in contrast to the legend - a close relationship to the literary tradition. Even in antiquity , literary stories were written about people who were perceived as outstanding religious and moral personalities and " saints ".

In hagiography , such legends of saints are examined alongside acts of martyrs and other traditional texts as a vita . Such hagiographic texts are still attributed to historiography by some scholars disregarding their special character , although a distinction should be made between “saints legend” and “saints biography”. Not least in the case of political legends, however, the idea is widespread that these are “inaccurate statements of fact”. Nevertheless, individual legends can contain a core of historical truth in that they try to convey the core of a fact or the meaning of an event in pictorial or scenic narrative form, even if the respective story told is unsourced from the source .

In the form of the legend of saints, the legend does not aim at the only superficial historical truth, but at the proclamation of a truth of faith. It is central to the revelation of the divine saving effect , which appears in the person of a saint, authenticated symbolically primarily by the sign of the miracle . The best-known examples are the legend of Christophorus and George, which can be regarded as a kind of narrative theology. Here, the narrative frame of the legend, as with the saga, myth and fairy tale , remains in the fictional area.

However, legends of hermits or ascetics can also have historically coherent individual elements. In the Egyptian monastery Deir Abu Fana , for example, the mummy of Apa Bane (translated: brother / monk palm) was found, which had the disease Bechterew's disease . In his legend, written down in Coptic language , he is described as someone who always fasted, never slept and almost always stood - symptoms of that same disease, according to the Coptologist Siegfried G. Richter .

In media parlance, the term is also often used in the general meaning of “ fame ” and “ celebrity ”. 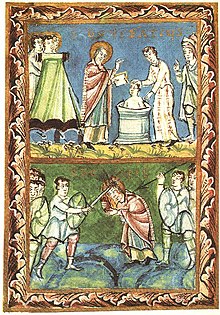 In his classification of legends, the theologian Harald-Martin Wahl based himself on the semantics of the term legenda . According to Wahl, the legends about Jesus Christ ( Christ legends ), which were partly included in the apocryphal gospels and in the stories of the apostles , were later supplemented by the legends of the first Christian martyrs ( martyr legends ) in ancient Christianity ; especially those of which the church fathers of the 3rd century ( Tertullian , Hippolyt , Origen , Cyprian ) reported and which are attested by ancient Greek grave inscriptions. These stories were accompanied by a religious veneration of the martyrs in cult , which from the end of the 4th century is also attested for the saints ( liturgy , cult of relics ). Since then, both the saints and the martyrs have been invoked along with angels and the apostles in case of threat and need .

The philologist Benedikt Konrad Vollmann focused on religious legends as part of an article in a Christian dictionary. According to him, religious legends arise in the "gravitational field of the respective high religion". He cited the legend of Buddha as an example for Buddhism and the legends of the heroic deeds of Muhammad's son-in-law Ali for Islam . In the legends that arose in Christianity, he distinguished between Marian legends ( Marienmirakel ), apostolic legends (e.g. Andreas , Thomas , Jacobus ), bishop legends ( Nicholas , Martinus ), monk legends ( Antonius Eremita , Benedikt , Franziskus ), virgin legends ( Agnes , Agatha , Caecilia ) and penitential legends ( Gregorius ).

The “Dialogi de miraculis patrum Italicorum” by Pope Gregory the Great (540–604) are among the earliest collections of legends . Before 959, the canoness Hrotsvit , who is considered the first German female poet and historian, completed her first collection of legends. The content of her legends, written in epic and elegiac form, included the life of Mary , the resurrection of Christ and the lives of Gangolf and Pelagius . The legends that arose in Germany culminated in Middle High German verses at the end of the High Middle Ages . Among the best known are those by Hartmann von Aue , Konrad von Würzburg and Rudolf von Ems . In the High and Late Middle Ages, collections of legends in the form of literarily composed legendaries (mostly collections of reports related to saints) found widespread use. Most powerful was the Legenda aurea of Jacobus de Voragine (1228 / 29–1298), who recorded the enormous wealth of legends of his time and made it available for cultic purposes as well as for private piety. The influence of this work on the visual arts of that time can hardly be overestimated.

In the age of the Renaissance and Reformation , a sharp critical point of view against the legends developed. Erasmus of Rotterdam distinguished the fabulae fictae (fictitious stories) from the historical facta (facts). The latter could be checked for authenticity using historical-philological criticism . In addition, according to Erasmus, only the facta are suitable for the educatio (education) of the humanist . His related attitude to exclude the fabulae fictae from the humanistic educational idea was also shared by the church reformer Martin Luther . Luther, who counted the pious legend as part of the edification literature , turned in the context of his demand for historical truth above all against the decorative miracle details of the saints' lives, because according to him they contained "so many lies ". About the legend, which he called the “lie” several times, he wrote: “Since nobody knows where they come from, when they started [...]. Item , who brings up the holy lies S. Christoff , Georg , Barbara , Catherin , Ursula and the on zal with iren miracles ”. Despite his fundamental criticism, Luther allowed certain motifs in the miracle story to be regarded as exceptions for some holy figures in order to make them subservient to “ catechetical allegory ”. This is particularly the case with the figures Christophorus and Georg, which are also cited disparagingly , but also with Nikolaus , Martin , Elisabeth and Katharina . In contrast to the holy lives as a whole, Luther understood these exceptional motifs as productive fictions; they are not lies, but poems .

The Protestantism attacked Luther's criticism, which in the second half of the 16th century Kontroversisten to an extended polemic led against the legends. After legends failed to withstand critical interest during the Enlightenment , they were respected again in Romanticism . Numerous writers of the 19th century, beginning with a plea by Herder , created new legends. These included Goethe's legend of the horseshoe and Kleist's The Holy Cäcilie or the violence of music . In the 20th century, the legend up to the parody of the "anti-legends" found new attention. Contemporary legends are mostly so-called urban legends .