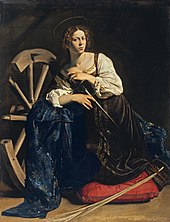 Catherine of Alexandria (or Catherine of Alexandria ) is one of the most famous saints . She is venerated as a martyr in the Catholic and Orthodox Churches and belongs to the so-called Virgines capitales , the four great holy virgins. St. Katharina is one of the fourteen holy helpers in need and is considered to be a helper when suffering from the tongue and language difficulties. She is the patron saint of schools, the philosophical faculties, and seamstresses. She is the patroness of numerous churches .

According to Christian tradition, she lived in the 3rd and early 4th centuries and suffered martyrdom under the Roman emperor Maxentius (306-312), according to other sources under Maximinus Daia (305-313) or under Maximian (286-305).

According to the current state of research, Katharina is almost certainly an invented figure. The Katharina legend was probably constructed after the personality and fate of the late antique philosopher Hypatia from Alexandria (approx. 355-415 / 416) who was murdered by Christians . The roles of Christians and Gentiles were reversed. 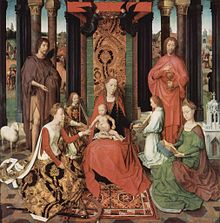 Triptych of the mystical wedding of St. Catherine of Alexandria. Hans Memling , 1479

According to legend, St. Catherine a consecrated virgin who had promised herself Christ . She is said to have been the beautiful daughter of the pagan king Costus and his wife Sabinella from Cyprus, who lived in Alexandria in Egypt around 300 AD and was led to believe by a hermit .

When the emperor Maxentius (according to the oldest tradition; according to later tradition Maximinus or Maximianus) condemned Christians to martyrdom, Katharina opposed him and asked him why he did not convert to Christianity instead of asking Christians to sacrifice to idols. In a public discussion to which the emperor had summoned his 50 best philosophers and scholars, Katharina put forward such plausible and learned arguments for Christianity that all fifty were converted to Christianity. Because they had not been able to dissuade Katharina from being a Christian, the emperor sent them all to the stake.

Impressed by her intelligence and quick-wittedness, the educated Empress Faustina herself went to her dungeon to persuade her to become pagan. But the empress was also converted to Christianity by Catherine and, like the philosophers before, was executed. Katharina was then scourged for twelve days and imprisoned in a dark dungeon without food. However, she received divine assistance from angels who anointed the wounds and from a white dove who brought food. Christ himself also came to strengthen their faith and prepare them for martyrdom. 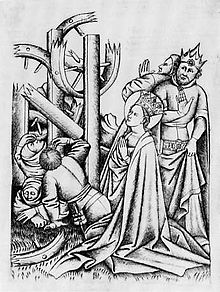 The martyrdom of St. Catherine , shown on a playing card in copper engraving

The beheading of St. Catherine , baroque ceiling painting in the old cemetery church in Nusplingen by Johann Rudolf Mohr, 1711 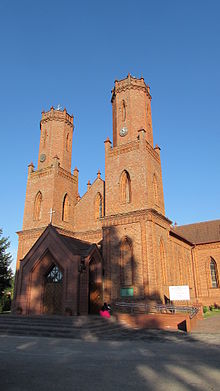 Church of Saint Catherine of Alexandria in Krokowa in Poland

The torture tool of their martyrdom should be the wheel . The Golden Legend According to it were four-lined "with iron saws and sharp nails" wheels. Two of them should be moved downwards and the other upwards in opposite directions and thus tear the martyr. At Katharina's prayer, however, an angel came and destroyed the instrument of torture with such force that 4,000 pagans were killed at the same time. Ultimately, Katharina was beheaded and milk instead of blood flowed from her wounds. Angels brought their remains to Mount Sinai . 500 years later, her relics were found there, and St. Catherine's Monastery was built on the site in honor of the saint . From the sarcophagus an oil that is thought to be medicinal flows incessantly.

In modern research it is believed likely that St. Catherine is an invented figure. There is no evidence of their historical existence, and their Passio , the traditional record of their martyrdom, is in every respect unreliable. Presumably, the hagiographic representation of Catherine is based on the personality and fate of Hypatia of Alexandria (approx. 355-415 / 416), murdered by Christians , with the roles of Christians and pagans being reversed.

Hypatia was a late ancient Greek mathematician, astronomer and philosopher . She taught publicly at the Museion of Alexandria . As a representative of a non-Christian philosophical tradition, she belonged to the oppressed pagan minority in the predominantly Christian Alexandria . During a power struggle with the prefect Orestes , the patriarch Cyril of Alexandria , who had been in office since 412, gathered the Parabolani (a Christian militant lay brotherhood) and around five hundred violent monks from the desert in the city. According to a rumor probably spread by the patriarch himself, the Christians seized the old philosopher, brought her to the church Kaisarion, stripped her there naked, killed her with broken pieces or bricks, and dismembered and burned the body.

Relics of St. Katharina are venerated in the basilica of St. Catherine's Monastery on Sinai at the foot of Jebel Musa, which is consecrated to the Transfiguration of the Lord , on the site of their alleged find in the 8th (or 10th) century.

Saint Catherine is the patron saint of the canton of Valais and its capital Sion as well as the cities of Steinau an der Straße , Freiburg (Switzerland) , Freistadt (Austria), Ratingen (Rhineland), Kuldīga (Latvia) and Działdowo (Poland). Part of her image is also in the city arms, for example in Frankenberg in Saxony . In popular belief, she is the protector of girls, virgins and wives, philosophers, theologians, scholars, teachers, students, lawyers and notaries as well as the trades of Wagner, miller, baker, potter, tanner, spinner, cloth merchant, rope maker, boatman, printer, armorer , Shoemakers, hairdressers, seamstresses and scissors grinders. It also protects church buildings, universities and colleges, libraries and hospitals. Finally, their assistance is also called upon to protect crops, with migraines, with diseases of the tongue and with finding drowned people. Because of her erudition, she became the patroness of many Catholic educational institutions. She is the patroness of the Catholic University of Eichstätt and the theological faculty of the Albert Ludwig University of Freiburg. In the early modern period she had the patronage of the Jesuit high schools, where the figure of St. Occasionally Katharina was a heroine in school theater performances.

The cult of St. Katharina is attested from the 7th century. She was one of the most popular saints for centuries. In the Catholic, Anglican and Evangelical Churches, the day of remembrance is November 25th, and in Regensburg July 5th as the day of the transfer of the bones .

During the 15th and 16th centuries, ecclesiastical dignitaries made several efforts to have Catherine of Alexandria deleted from the calendar of saints. In the absence of evidence of the historical existence of the saints, it was removed from the General Roman Calendar in 1969 , but reintroduced in 2002. It is also listed first in the Martyrologium Romanum of 2004 on November 25th.

The saying goes down in the vernacular: “Kathrein stops dancing” . The feast day of St. Katharina is one of the last saints' feasts before Advent . Advent serves (analogous to Lent before Easter ) as a time of penance and a so-called closed time to prepare for Christmas. In these closed times, public dance events were previously prohibited. That is why people liked to celebrate the Kathrein dance before the beginning of Advent .

The crater of the moon, Catharina, is named after Catherine of Alexandria .

City coat of arms of Altena with St. Catherine and her attributes sword, wheel and crown

Attributes of St. Catherine are the wheel , cross and book, the crown , the palm branch and the sword, with palm branch, wheel and sword attribute of martyrdom, the crown and an attribute of victory over the flesh in both the martyrdom of consecrated virginity represent . Heraldry uses the Catherine's Cross .

For the martyrs and helpers in need Margareta , Barbara and Katharina there is the following motto:

Margareta with the worm,
Barbara with the tower,
Katharina with the bike,
these are the three holy girls.

To commemorate St. Catherine white or yellow-white blooming flowers are also called "Catherine flowers" or "Catherine flowers". It is Linaria vulgaris , the common toadflax . These flowers will be brought to the graves of the deceased on All Souls Day that soon follows. The common name "Katharinenblume" is also used to denote the real black cumin (Nigella sativa) because of its wheel-shaped flower . This flower resembles the torture wheel of St. Catherine. Likewise, the autumn crocus is popularly referred to as "Katharinenblume" because of its late blooming point. On and around St. Catherine's Day, "Katharinenmärkte" are held in the form of a folk festival in some cities and communities to get used to the darker season, such as in Seelbach in the Black Forest or in Hachenburg in the Westerwald.