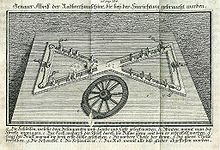 The Dillinger “wheel breaker” (1772), which was used during the execution of Matthias Klostermayr .

Wheels , also: speak broken ( radebreken , with the rade stozen ), is no longer practiced form of execution by a large wagon wheel. It was a mirror punishment for street thieves, but the Sachsenspiegel also stipulated it for murder and arson .

It is a form of execution from the Middle Ages and early modern times . The practice was not completely abolished in Bavaria until 1813, in Kurhessen it was still in use until 1836. The last known execution by wheels took place in Prussia in 1841. The robbery murderer Rudolf Kühnapfel had been convicted of the murder of Andreas Stanislaus von Hatten , the Bishop of Warmia .

Those convicted of murder and / or robbery were taken to a scaffold and tied to the ground. The primary goal of the first act was the painful mutilation of the body, not death. Therefore, the most common variant was to start breaking bones with the legs. To do this, the executioner dropped the judging wheel (often with an iron edge) on the convict's lower leg and then worked his way up to his arms. The rhythm and number of strokes were prescribed, sometimes also the number of spokes on the straightening wheel. To increase its effect, sharp-edged pieces of wood, so-called cribs, cribs or cribs , were placed under the joints . Later there were devices in which the convict could be "clamped". Although not common, the executioner could be instructed to execute the convict at the end of Act I by aiming at the neck or heart at the coup de grace . Even more rarely, this happened immediately at the beginning (from the head down).

In the second act the body was braided into another wheel, which was possible through the broken links, or tied to it. Now the wheel was set up on a stick or stake. After that, the executioner was allowed to behead or strangle the convicted person. Alternatively, fire was kindled under the wheel, or the wheeled man was simply thrown into the fire. Occasionally a small gallows was set up on the bike, for example when the guilty verdict was theft in addition to murder.

Since the body remained on the bike after the execution and was left to be eaten and decayed, this form of punishment, similar to the ancient crucifixion , had a sacred function beyond death: According to the beliefs of the time, the failure to be buried stood in the way of a resurrection.

If the man on the wheel fell off the wheel while still alive or if the execution failed in any other way, this was interpreted as God's intervention. For example, there are votive pictures of rescued bruised people and there is literature on the best treatment for such injuries.

In some places it was customary to smash the bones with an iron bar ( barré ) directly on the bike or to attach the body to a St. Andrew's cross .

The full cruelty of the wheel was not always practiced. Even after being sentenced to this punishment, it was possible and also common at different times and in individual judicial districts for the convicted person to be pardoned, that he was first executed by means of a fast-acting death and then the cycling was only carried out on his body post mortem .

In some cases, a delinquent was directly sentenced to multiple types of execution. The Bavarian Hiasl , bourgeois Matthias Klostermayr , was sentenced to death as a gang leader in 1771. He was first strangled, then his body was whacked, beheaded and finally quartered and the body parts were publicly exposed in four cities in whose territory he had robbed.

Hans Spiess is whacked. (Chronicle of Diebold Schilling the Younger , 1513).

If the victim was not strangled by his executioners after cycling, they could continue to live in great agony for several hours before death from circulatory collapse occurred. It happened like this:

Others wheeled to death were: 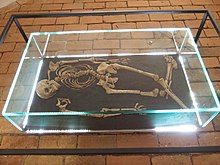 Since the people on their wheels were mostly exposed to environmental influences for a long time, there is hardly any archaeological evidence of cycling. In the German-speaking countries , only one find of someone whacked has been documented: In autumn 2013, the skeleton of a man was found on Bundesstrasse 189 between Perleberg and Pritzwalk , whose position and traces of injury indicate death by cycling. Using an iron belt buckle, the skeleton was dated to the 15th to 17th centuries. The man's identity is unknown.

Such types of killing were perceived as appropriate retaliation (analog talion ). So it was said in a proverb: “With evil you have to drive out evil.” Johannes Agricola explained this in one of his collections of proverbs: “Bad boys damage all the world / that's why you have to talk / gallows / rabensteine ​​/ thurn / gefengnis / hencker and stockmeister / so that you were the bad guys. " Criminal justice was seen as a defense of society against chaotic conditions. According to the idea of ​​the time, the deity himself ensured that every evildoer received the punishment appropriate to him (“what belongs to the ravens does not drown”).

The verb "speak broken" contains as modifier "wheel" and as a basic word the Old High German brehhōn means what "knock down". About the Middle High German meaning of "break your limbs on the wheel" it was called "torment" from the New High German period. It has been used to mean “mutilate a language” since the 17th century. Another lexical expression is the phrase "feel (how) whacked". It alludes to the time between the physical execution and death, in which the delinquent "smashed" and at his mercy can do nothing more than endure his miserable condition and hope that it will end as soon as possible. The phrase is an example of the style figure of hyperbola (exaggeration) and is used to illustrate severe physical discomfort and exhaustion, especially when getting up in the morning or after physical or emotional strain. In terms of linguistic history, it is a matter of a flattening of meaning that could have arisen through defense qua banalization. Many speakers today are unaware of the original meaning.

In Pieter Bruegel's paintings Triumph of Death (around 1562) and Christ Carrying the Cross (1564), wheels erected on the pole can be seen.

The Peasants' War panorama of Bad Frankenhausen by Werner Tübke has close to the "plague" and the Black Death a scene on "The place of execution", which is reminiscent of this execution form. It shows the straightening of a man on the wheel. Another representation of a man with a knot can be found in a round window of the Tübingen collegiate church (choir side).