Executioner is a redirect to this article. Further meanings are listed under Executioner (disambiguation) .

Medieval costume of an executioner with a head mask ( Peter and Paul Fortress , St. Petersburg )

Executioner of the 15th century in typical red costume

The executioner (the " judge with the sharpness of the ax or sword ") is a professional title that has been used since the Middle Ages for executors of the death penalty or other court judgments. In the past, the terms message and Carnifex were also used . Today the term executioner is used synonymously (originally the executor of an execution by " hanging "), also known as Master Hans or Freimann .

History of the executioner's office

Even in the Roman Empire there were people who, on behalf of the courts, carried out activities comparable to the executioner , such as torture and the execution of the death penalty. Soldiers were probably initially entrusted with this activity, but there was probably already a certain specialization, as ancient descriptions of the office of "Carnifex" show.

In the old European popular law (Saxon law, Sachsenspiegel , Lex Salica, etc.), the execution was carried out by one of the judges , often the youngest, or the prosecutor . A compulsory servant or bailiff (also Büttel ) is named as an executioner, but he does not receive any money for the act of execution.

The executioner's office developed in connection with the “professionalization” of the entire penal system in the course of the 13th century. Attempts were made to bring the judiciary into the hands of the state ( monopoly of force on the part of the state ) in order to a. To prevent feuds and acts of violence in general . Until then, the Akkusationsprozess was mainly applied, that is, before court to plaintiffs and defendants were equally against. From 1250, however, this was to change with the desire to prevent violent crimes through harsh punishments and persecution. The Inquisition process displaced due to its efficiency more and more Akkusationsprozess. It was now up to the legally trained and civil servant judge and the court clerks to find out the facts. The goal was usually to hear the defendant's confession. As a result, torture was also increasingly used and, in parallel with this, the office of executioner emerged (similar to the "professional" judge) as a result of the increasing differentiation in criminal proceedings. From this period comes the synonym Nachrichter, which the aspect of to provide judicial enforcement of judgments in the foreground.

Execution of pirates in Hamburg (1573)

The first executioner was mentioned in the Augsburg city ​​law in 1276 . In the beginning there were frequent changes in the executioner's office. Also, seldom did a family get a job several times in a row, which later changed dramatically. A tendency to come from the lower classes cannot be denied among the first executioners. The reasons for the initially quite frequent change of personnel can be seen as a predisposition of the first executioners to criminal acts as well as a possible "social mobility", whereby it cannot be clarified whether this is only a change of location or also a change of profession (and thus possibly associated social advancement) has acted.

Marriages took place primarily within the executioner and skinner families . This was associated with many advantages, such as social and financial security in old age and the offspring, and veritable "executioner dynasties" developed, which could also compete financially with legally higher-ranking people at the time. When the work was done, the executioners always received their wages from the families of the convicted or executed; that was legally stipulated. Around 1700 a beheading in Aachen cost 15  thalers . A subsequent cremation at the stake cost 25 thalers.

But executioners were not always male. There is, for example, solid evidence that women from the late Middle Ages to the 19th century also acted as executioners in isolated cases. During the French Revolution and afterwards, for example during the public execution of women murderers in France, they sometimes executed with the guillotine . In Germany in the middle of the 17th century, the wife of an executioner is said to have represented her husband for a short time and executed two thieves on the gallows .

The executioner's direct duties included the actual execution and torture to obtain a confession as part of the trial. He was also responsible for carrying out corporal punishment and honorary punishment . In addition, he often had to take on other unpleasant and outlawed tasks - e.g. For example, the sewer cleaning , cutting, and the burial of suicides or supervising the prostitutes . Often the post of executioner, for practical reasons, it was with that of Skinner (other names are martinet, rascals or knacker ) merged: The rendering industry took care of the financial livelihood of the executioner and skinner-mates were at an execution assist (executioners) .

Executioners often left torture, hanging and (since the French Revolution) killing with the guillotine to their assistants and only took over supervision. The beheading with the sword or the executioner's ax ( hand ax ) was carried out by the executioner himself, as this required skill: the head should be separated from the body with just one blow if possible. 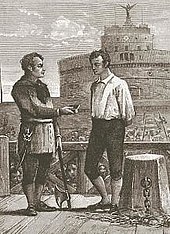 Through their work, executioners were able to acquire solid knowledge in the field of anatomy. Some of them were more familiar with the structure of human bones and the arrangement of internal organs than the local bathers . There are examples in which executioners earned something extra as horse doctors and surgeons . Since executioners were allowed to use the products of their cover shops themselves, they had, among other things, dog fat, which was used to anoint inflamed joints in horses and humans. The manufacture and sale of medicinal magical substances extracted from the bodies of those executed provided executioners with additional income. These were, for example, the production of "poor sinners fat" ( human fat ) or the hands of the dead .

However, this often brought them anger and quarrels with the trained doctors, who claimed the monopoly of medicine for themselves and often tried to convince the citizens of the layman's nature of the executioner. However, the medical elite could not prevail against every kind of healing practice by executioners. So they were officially allowed to heal "external wounds". However, the doctors in some imperial cities succeeded in preventing the executioners from practicing internal medicine. Despite this ban and given the fact that the citizens had better experience with the executioner than with the local doctors in curing their complaints, executioners were not deterred from practicing internal medicine as well.

As a rule, the executioner was initially trained by the father or stepfather and could be continued with another master. One of the skills that an executioner had to possess was the successful elicitation of a confession from the accused through properly applied torture. The executioner also had to have medical knowledge in order to be able to judge which tortures the delinquent endures without dying from it. Executions also had to be carried out correctly and in accordance with the instructions of the court. In some cases, a failed execution drew “popular anger” on the executioners and it could even go so far that they were lynched by the angry crowd.

They also used their medical knowledge for other activities. The executioners often practiced successfully alongside their actual job as healers and thus additionally secured their existence. There is also evidence that the executioners, like "normal" craftsmen, went on tour during their training. At the end of the training, every executioner had to carry out a “master's test”. This did not happen without official approval. A condemned person had to have his head cut off under the supervision of the training master. If this was successful, the apprentice executioner received a master craftsman's certificate with which he could apply for free execution. Without such a letter, he had no chance of a job.

Costume of the executioner of Paris in the 18th century

Practically no other career path was open to the sons of executioners. Their daughters could only marry in these circles and pursue semi-disreputable activities (fortune-telling, love and damage spells , magical or natural healing methods). This is how executioner dynasties were formed, which, due to the closed marriage circle, show a variety of family ties. One of the best known among them was that of the Sansons , who were the executioners of Paris and some other French cities ( Tours , Auxerre , Melun , Versailles , Reims ) for six generations (1688-1847) .

From a sociological point of view, they became a caste , but not in a caste, but in a class society . It was already very difficult for her to find godparents at Christian baptism . This “ dishonest ” profession also had to follow other taboos - for example, executioners were required to have a separate place in the church or in the pub. They were also forbidden to hunt, with the exception of wolves.

When fewer and fewer executioners were needed in the course of the humanization of the penal system in the 17th and 18th centuries , many members of the former executioner dynasties switched to related professions such as bathers , surgeons , veterinarians or tooth tearers . This explains the originally large social gap between the (highly respected) doctors and the (rather disreputable) surgeons .

In his memoirs, Heinrich Heine reported on his first great love for the “little red sef”, an executioner's daughter.

One of the last executioners in Germany was Johann Reichhart (1893–1972). During the Weimar Republic and the Nazi era , he carried out a little more than 3,000 guillotine executions, including those of Hans and Sophie Scholl , members of the White Rose resistance group . After 1945 he hanged 156 convicted representatives of National Socialism on behalf of the American military government on the gallows .

The last kk executioner in Vienna was Josef Lang (1855–1925). It was a special case, because he did not come from an executioner family, but ran a coffee house in Vienna- Simmering in addition to his work as assistant to the Viennese executioner Karl Selinger (1862–1899) , and as such was very well known and popular - although nobody knew at the beginning informed about his second job. After his appointment as executioner of Vienna in 1900, he had to give up the coffeehouse as a civil servant, but enjoyed a high social reputation, was sometimes received like a state guest at executions in small provincial towns of the monarchy and was invited to evening parties.

The people who worked as executioners in the German Democratic Republic (GDR) were also secret and anonymous . Hermann Lorenz carried out the last 20 executions on German soil between 1969 and 1981.

In countries where the death penalty is still practiced in the 21st century, such as B. in the USA , the job requirements of the executioner have changed due to the execution tools ( electric chair , gas chamber , " lethal injection "). The exercise of the profession is still detrimental to prestige .

The fact that women regularly act as executioners who officially carry out death sentences has occurred since around the middle of the 20th century. For example in the United States of America or in some Asian countries, where they carry out executions, particularly of women or of younger male death row inmates.

Full-time executioners in the true sense of the word who carry out corporal punishments (chopping off the hand) and life sentences ( beheading ) with the sword or hatchet exist today in some Islamic countries where judgments are made according to Sharia law , especially in Saudi Arabia. Arabia and Sudan . In these countries, the role of the executioner can (not always) be assumed by relatives of a victim of the convicted person, i.e. laypeople, at their request, with often extreme consequences for the convicted person in the form of prolonged agony. In these countries , the executioner often undertakes the highly traumatic amputation of limbs with an ax, saber or (curved) sword in accordance with Sharia law, in some cases public . B. with thieves or drug dealers .