The title of this article is ambiguous. Further meanings are listed under Richter (disambiguation) .

Judge is a redirect to this article. For other meanings, see The Judge . 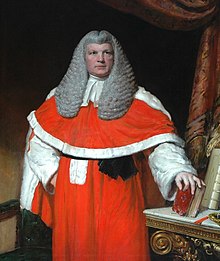 Portrait of a 19th century English judge in official costume

A judge is the holder of a public office at a court that performs judiciary tasks (jurisdiction). Depending on the place and time in history, the office of judge is associated with a wide variety of requirements, rights, duties and privileges .

The judge's task is the jurisprudence, i.e. the subsumption of life facts presented to him under the law , usually followed by the derivation of a legally compliant and ideally fair judgment for all parties involved. In private law, this usually means the interpretation of rights and obligations between several parties. In criminal law, the conviction (or acquittal ) of the accused . In public law, the assessment of rights and obligations between the state and the individual. An intensification of this activity can also be found in the Latin procedural principle da mihi factum, dabo tibi ius ("Give me the fact, I will give you the right [from it]").

If the law so provides, the judge is also responsible for the preliminary determination of the facts on which the judgment is based. This is particularly true of criminal law, where the official maxim applies. In contrast, in the greater part of private law, the disposition maxim applies , according to which the parties themselves determine the facts to be assessed.

As an expression of the representation of state power , the office of judge is linked to the concept of the state itself. From time immemorial there will have been people who arbitrated disputes between other people on the basis of an authority assigned to them . It was only with the development of an organized state structure that the judge became an office .

One of the first evidence of such a judicial office comes - in the form of the Codex Hammurapi - from the 18th century BC. BC and Babylon . The Codex, a set of laws set in stone, instructs judges to enforce it and gives them detailed instructions on how to rule. The office of judge was exercised by the governor or the king himself. In the Roman Empire , the Praetur , whose owners were responsible for the jurisdiction in Rome, belonged to the Cursus Honorum , i.e. to the traditional official career of Roman politicians.

For centuries the judge was mostly also the owner of other powers, be it of factual nature (in the person of the commander of an army , as in the case of the praetur) or in combination with powers of law-making or enforcement. Even in the case of judges who spoke only justice in the sense of the division of labor , the supreme judicial power lay in despotism or in absolutism by law with the head of state . He or she could overturn all judgments. The lower jurisdiction was nevertheless transferred to local administrators (in Western Europe for example in the form of Schultheiß , Vogt or Meier ). This also gave them judge status.

It was only with the idea of ​​the separation of powers , as it was formulated by John Locke and Montesquieu , that the realization emerged that power must be shared in order to control it. The independence of the judiciary from the executive and legislative branches connected with this led to the office of judge becoming independent of officials of the other branches .

Judge characteristics according to the rule of law

In the understanding of the modern constitutional state , a judge has to meet various requirements, which are mainly derived from the right to a fair trial . These are in particular:

Legalism
The legal judge is to be guaranteed to the parties to the proceedings . This means that a case cannot be assigned by the court to any available judge, but that this judge must be determined in advance based on abstract criteria.

Impartiality
The judge must be impartial , i.e. he must not have any personal interest in the outcome of the proceedings. This he would, for example, if one of the parties with the judge used is. It is irrelevant whether the bias works to the benefit or to the detriment of the party concerned.

No affiliation to any other state authority
In order to prevent a concentration of power, a judge (as a member of the judiciary ) may not hold an office in one of the two other state powers ( legislative , executive ) at the same time .

Election or appointment
A person cannot appoint himself a judge and he cannot inherit the office. Rather, it is either to be elected or to be appointed by a legitimized body (for example the executive, which is democratically legitimized for its part ).

In addition to these requirements, depending on the state, there may be various other requirements, such as the minimum age, place of residence or language skills of the applicant. The prerequisite for legal training is also not mandatory (so-called lay judgeship ). In many cantons of Switzerland there are no training requirements for judges - although in reality most of them have a degree in law .

In civil proceedings it is possible to choose alternatives to the legally prescribed judge:

The mediator distinguishes himself from the judge in that his procedure (mediation) is a voluntary procedure for all parties and he himself does not have any state authority. The result of a mediation - insofar as one is achieved at all - is therefore not binding on the parties.

The arbitrator (in the legal sense) is a judge appointed by the parties. His judgment is binding for the parties (based on a joint declaration of intent), but he is not the competent judge according to procedural rules.

The executioner is not a judge in the strict sense of the word . Rather, he is - in criminal law - the person who has to carry out the death penalty . Since, figuratively speaking, he judges the condemned person again after the judge, he was also called "messenger" in earlier times.

The investigating and investigating magistrates are also not judges in the narrower sense. Your task consists or consisted of carrying out the investigation as preparatory work for the actual criminal process. 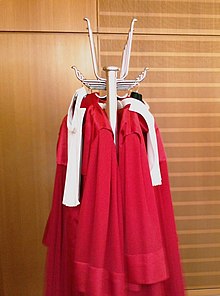 Depending on the country (and sometimes even in subordinate geographical units), there are different requirements for the clothing of the acting judge. It is also possible that no specifications are made at all.

In the area of common law (e.g. in the United Kingdom or Australia ) and going back to English nobles who served as judges, judges often wear an allonge wig . In addition there is a robe or a gown as an official costume .

In continental Europe judges (nowadays) no longer wear wigs, but sometimes they still wear robes or gowns. In Germany in particular, these are partially supplemented by berets . Based on the design of the clothing (color, material, collar, etc.) it may be possible, depending on the legal system, to assign the wearer to a certain category (judge of a higher or lower court or another class such as that of a lawyer ).

In many countries, judges are addressed by their title rather than their name in their official work. In addition to the "Your Honor" in Common Law, known from film and television (mainly United Kingdom and United States ), in Germany, for example, the salutation "Mr. Chairman" / "Mrs. Chairman" exists.

The epitome of the just judge is the (historically not certain) biblical King Solomon (Schelomo in Judaism or prophet Suleiman according to the Koran ), according to whom balanced, wise judgments are referred to as Solomon's judgment .

The judge's office by state