from Wikipedia, the free encyclopedia
This is the spotted version , flagged on March 26, 2020 . There is 1 pending change that has yet to be viewed.

This article deals with the radio broadcaster SWR2. For the internet radio, see SWR2 archive radio . 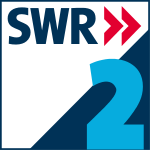 previous logo of the broadcaster

Another variant of the earlier logo

SWR2 is the culture program of the Südwestrundfunk . It was created in 1998 as the successor to S2 Kultur , which was produced in cooperation between SDR and SWF . The official transmission area includes Baden-Württemberg and Rhineland-Palatinate ; At certain times, SWR2 also broadcasts separate state programs. The establishment is based at the SWR radio station in Baden-Baden .

With the start of SWR2 in the summer of 1998, the culture program of the SWR was given a uniform structure under one program management. The editorial offices were brought together in Baden-Baden, only the state culture departments remained in both Stuttgart and Mainz . In addition, the SWR2 regional music editorial office RP was set up for Rhineland-Palatinate. In terms of content, however, SWR2 was a direct consequence of its predecessor S2 Kultur. The S2 program scheme was transferred to SWR2 - with minor changes. Program reforms have taken place repeatedly since the program began.

The SWF and later the SWR (but significantly less the SDR) have been formatting their first and third radio programs ever more strongly since the 1990s , which is why many information programs , broadcast slots for features or radio plays have been moved to the second program. Also types of music such as jazz or blues were shifted from underground to serious music , and thus more strongly than before to the second program.

Since 2008, SWR2 has been affected by considerable budget savings. Since 2011, the ARD night concert has been taken over daily from midnight to 6 a.m. (instead of only until 5 a.m. as before, and on some days only from 2 a.m.), the ARD night concert organized by SWR2 in the night from Friday to Saturday was 2011 canceled, the programs Jungle and Life merged into tandem . By 2020 the budget is to be reduced by 25% compared to 2010.

SWR2 is aimed at people who are particularly interested in topics of culture and knowledge, as well as friends especially of classical music. Apart from individual magazine programs, longer word programs are usually alternated with longer music programs over the course of the day. Different forms of broadcasting are used, including a. Magazine, feature , essay, radio play, reading, lecture and panel discussion.

In contrast to other programs, SWR2 is also characterized by the fact that long broadcast formats run even in the busy times (in the morning before 9:00 a.m. and in the afternoon from 5:00 p.m.): The feature series SWR2 Knowledge at 8:30 a.m. (at which also belongs to the SWR2 Radio Academy ) has also developed into one of the most successful podcasts in Germany. The SWR2 forum at 5:05 p.m. is a 45-minute discussion program on weekdays. Since 2007, the educational program has been supplemented by the web channel SWR2 Archivradio , which has also been an independent podcast since 2017.

So-called serious music dominates the music program . In addition, demanding music from the fields of pop , chanson , jazz , world and experimental music can be heard. In addition, SWR2 broadcasts all concerts of the Donaueschinger Musiktage , the Schwetzingen SWR Festival and RheinVokal live or as a recording .

SWR2 can be received almost everywhere in Baden-Württemberg and Rhineland-Palatinate via VHF , DAB + and satellite ( DVB-S ). In the north-west of Rhineland-Palatinate, compared to the other SWR programs, there are no FM frequencies on the Linz and Daun / Scharteberg transmitters . This is due to a lack of frequency in this region. With the introduction of its fourth radio program (today SWR4 ), the then Südwestfunk preferred the mass wave to the cultural program and switched to the SWF4 program on the former SWF2 frequencies without replacement. The then Süddeutsche Rundfunk proceeded in a similar way at the Stuttgart location, but a high-performance frequency for SWR2 (or at that time: S2 Kultur), originally intended for private broadcasting, was sued.

Reception is also offered on the broadcaster's website via a web radio stream, and individual programs can also be subscribed to as podcasts .

In order to retain listeners, SWR2 founded a “RadioClub” in 2003, whose members could receive reduced admission to selected cultural events in the broadcasting area and were sent the SWR2 program booklet. At the beginning of 2010, however, this was discontinued and replaced by a free culture card.

Programs and facilities of the Südwestrundfunk