from Wikipedia, the free encyclopedia
This is the spotted version , flagged on May 30, 2020 . There are 2 pending changes that have yet to be viewed.

The title of this article is ambiguous. Further meanings are listed under pyre (disambiguation) . 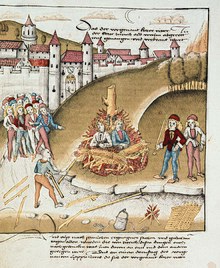 Cremation of the knight of Hohenberg with his servant for sodomy ; Big Burgundy Chronicle

The pyre ( Scheiter , old plural form of log , Old High German scît "piece of wood") is a stacked pile of firewood that is used to burn a dead person ( cremation ) or to execute one or more people by burning (fire death). In the case of book burns, it was also used to destroy books and books that were banned by the censors .

Cremation, also known as cremation, was widespread - even in America. In Europe and Asia it has mostly been detectable parallel to burial since the Neolithic . Since Christians, like Jews and Muslims, viewed the cremation of the dead as incompatible with belief in the resurrection , the method fell into disuse in Christianized and Islamized areas. In North Asia, the cremation of corpses still occurs occasionally, especially the Buryats burn the corpses of shamans in the best clothing together with knives and provisions at stake. In Hindu India , stakes are the traditional form of cremation to this day. Until the 20th century, widows were occasionally burned there in a widow cremation (sati) along with their husband's corpse.

Burning of the Salzburg Anabaptists in 1528

Death by fire was a common form of the death penalty in the Roman Empire of late antiquity . In the late Middle Ages and the early modern period , unrepentant heretics found guilty of heresy and therefore sentenced to death were commonly put to death. The same thing happened with the witch hunts .

Cremation of Christians in ancient Rome

The Twelve Tables Act (approx. 450 BC) already provides for the incinerator to be burned in the event of arson, whereby this regulation is apparently based on a Talion principle . The application is not known from the Roman Republic , although this can be attributed to the sources. Although sporadic evidence of this form of punishment was already available under Emperor Tiberius , it was probably first used on a larger scale under Nero to punish Christians accused of causing the great fire of Rome in AD 64. The ancient historiography attributes this to the cruel character of the emperor. However, it was more a question of a consistent application of the present law, even if the actual participation of Christians in the fire is at least doubtful. In the time after Constantine , the Roman military could also be punished with this punishment if they were guilty of conspiracy ( coniuratio transfugae ) with the enemy.

Later Christian portrayals of martyrs show that burning alive was used in Christian trials regardless of the offense. In late antiquity, which was marked by religious battles, the non-Christian emperor Diocletian threatened to die by fire against the syncretistic religious community of the Manicheans . After the conversion of Christianity to the state religion under Theodosius I , despite the earlier persecutions, people of different faiths were often threatened with this type of execution, since on the one hand the crucifixion was now rejected for religious reasons, on the other hand convictions in the amphitheater , such as the Damnatio ad bestias or the Damnatio ad ferrum , because of the originally pagan origin of the facility. One also saw a cleansing effect in burning (see: purgatory ). 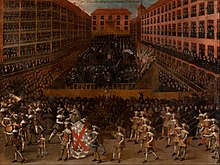 In the Christian Europe of the Middle Ages , the first known heretics were cremated in Orléans in 1022 . The “Anti-Heretic Law” enacted by Emperor Friedrich II. In 1224 for Lombardy already provided for death by fire in severe cases of heresy . In 1231 Pope Gregory IX took over . the law for the church sector. In the inquisitorial system condemned to death heretics were usually burned publicly at the stake. The formulation for the death penalty was usually that a heretic sentenced to death was to be handed over to "the secular arm", since the church was not even allowed to carry out the death penalty according to the principle of ecclesia non sitit sanguinem .

The religious judgment of the Spanish and Portuguese Inquisitions , known as the auto-da-fé in the early modern times and solemnly celebrated as a public act , ended with the burning of those sentenced to death at the stake, often in the presence of all ecclesiastical and secular dignitaries.

In the Middle Ages, death by fire was the usual punishment for Jews for allegedly desecrating the host . The following pogroms against Jews are documented :

Cremation of criminals and witches

The "Embarrassing Neck Court Order" of Emperor Charles V , ( Constitutio Criminalis Carolina ) of 1532 saw cremation as a punishment for sorcery (§ 109), counterfeiting (§ 111), "unchastity against nature" (§ 116), arson (§ 125) and theft of a monstrance with a consecrated host (§ 172). In the early modern witch hunts , women and men who were believed to have been convicted of witchcraft were burned alive.

In addition to the method of burning the condemned alive, chained or bound to a fire stake, there was also the option of strangling them at the stake beforehand. This was seen as an act of grace. Other variants considered gracious were the use of fresh, still damp wood, so that the condemned suffocated on the smoke before his body was burned, or a small bag of black powder was tied around his neck, which exploded as soon as the flames reached it .

On April 24, 1751 Anna Schnidenwind was strangled and burned at the stake in Endingen am Kaiserstuhl , probably one of the last executions of an alleged witch in Germany. The last death sentence by burning in Germany is said to have been carried out on May 28, 1813 on the Berlin Jungfernheide , when Johann Peter Horst and Friederike Luise Delitz were executed as members of a murderous gang.

Fire execution of Anneken Hendriks in Amsterdam in 1571