A consecrated virgin ( Latin consecrated virgin , pl. Virgins consecratae ) is in the Catholic Church a woman in the hands of the diocesan bishop publicly and forever lives in the state of virginity has praised and which the Bishop virginal consecration (CONSECRATIO virginum) donated has been.

Virgo inter virgines - the Virgin Mary surrounded by holy virgins (recognizable by her saints attributes , end of the 15th century) 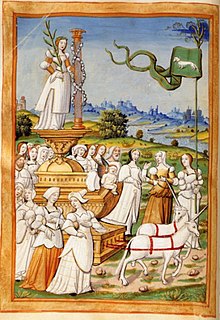 Even in the early days of the Church, it was customary to consecrate virgins. Therefore, a solemn rite was created through which the virgin becomes a consecrated person . “By consecration the Church shows how much she values ​​virginity; she implores the grace of God for the virgins and prays fervently for the outpouring of the Holy Spirit ”.

The early Christian state of virgins consisted of girls and women of different ages who, due to a special calling of Christ, took on the way of life of virginity for the sake of the kingdom of heaven ( Mt 19.11f  EU ). The writings of the apostle Paul ( 1 Cor 7,25ff EU ), ( 1 Cor 7,34  EU ), grave inscriptions and pictures in the catacombs , early Christian community ordinances  , sermons, letters and treatises e.g. B. the church fathers Cyprianus , Hieronymus , Ambrosius , Augustinus as well as the church writer Tertullian and others report of the virgins of the early church. Numerous Greek writers of the first centuries also wrote about the Virgines. Already in Tertullian's time the proposal and consecration of the virgins took place in public. St. Ambrosius dedicated his work De virginibus ad Marcellinam sororem ("On the virgins to Sister Marcellina") to his biological sister, St. Marcellina , who had received the veil of consecrated virgins from the hand of Pope Liberius around the year 353.

After a long period of testing with the help of the private vow of virginity for the sake of the kingdom of heaven, the candidates asked their bishop to donate the virgin consecration . In a public service they vowed to live voluntarily and forever as a consecrated virgin for Christ's sake. The bishop gave consecration through the consecration prayer of the church. Since the 3rd century, the virgins have received a veil afterwards , and since the 7th century also a ring . As early as the 4th century it became common for virgins to wear a poor tunic .

The virgins of the early Church lived secluded with their families. They committed themselves to a life of prayer, fasting , studying the scriptures , work, but also caring for the poor. Their lifestyle had to be simple and appropriate to their standing. They had their own seats at the celebration of the service.

Until the beginning of the 6th century, the consecrated virgins came together more and more to live together in closed monasteries . Since the 9th century, the consecration of virgins has been donated less and less and actually only in cloistered monasteries. This custom has been preserved among the monastic orders of the Benedictine , Trappist and Carthusian women . In other religious orders - such as the Ursulines - the consecration of a virgin can be donated "if there is an old custom". The whole of consecrated virgins has been called Ordo virginum (OV) since ancient times .

In the Italian Renaissance , the themes of chastity and virginity were incorporated and disseminated in allegorical poetry and images; they were given a high priority (see Triumph (Art) ).

In the course of the renewal after the Second Vatican Council , Pope Paul VI. In 1970 this rite was restored for women who "live in the world". Members of the Ordo virginum can therefore be both nuns and consecrated virgins living in the world . In the post-synodal letter Vita Consecrata , Pope John Paul II writes :

“Reason for joy and hope is to see that the old consecration of virgins, which has been attested to in the Christian communities since the apostolic times, is blossoming again today. Because of their consecration by the diocesan bishop, they acquire a special bond with the Church, to whose service they dedicate themselves, even if they remain in the world. Alone or in community they present a special eschatological picture of the heavenly Bride and the life to come, when the church will finally live the love for her bridegroom Christ in fullness. "

After a long period of preparation, preceded by the taking of private vows, the candidate is consecrated to the service of the Church by the bishop of her diocese through the solemn rite of the Consecratio virginum . Canon 604 of the CIC provides:

“§ 1. In addition to these forms of consecrated life, there is the class of virgins who, as an expression of their sacred plan to follow Christ in a particularly close manner, consecrated to God by the diocesan bishop according to an approved liturgical rite, mystically betrothed to Christ, the Son of God, and for the ministry of the Church should be determined.
§ 2. In order to keep their project more faithful and to increase the service for the Church according to their own status through mutual support, the virgins can form associations. "

The Instruction of the Congregation for Institutes of Consecrated Life and for Societies of Apostolic Life Ecclesiae Sponsae Imago (The Image of the Church as Bride), published on July 4, 2018, is the first ecclesiastical document that deals in detail with the status of consecrated virgins.

The consecrated virgin lives in a public church class, in the Ordo virginum , one of the forms of consecrated life , and is directly subordinate to the respective diocesan bishop. According to their circumstances and gifts of grace, virgins consecrated to Christ should devote themselves to penance , works of mercy, apostolate and prayer. Above all, this includes the Church's mandate to pray the hours of the Church . Wherever they live, they should serve the Church and share the concern of the bishop.

The consecrated virgin does not belong to the church hierarchy , nor are certain offices or functions associated with this class. She is not supported by the church either, but is responsible for her own living.

According to a survey by the Holy See, there were 4,000 consecrated virgins worldwide in 2015, 67% of them in Europe.

Well-known saints who belonged to the state of the virgins are, for example, Agatha of Catania , Agnes of Rome , Cecilia of Rome , Euphemia of Chalcedon , Catherine of Alexandria , Catherine of Siena , Lucia of Syracuse , Margaret of Antioch , Marcellina of Milan and Scholastica by Nursia .