Vita consecrata is a link to this article. The apostolic letter can be found under Vita Consecrata (John Paul II.) . 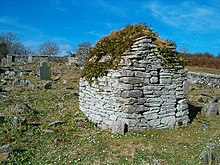 Cell of a hermit in Moville Highcross, Ireland

Pope John Paul II wrote the post-synodal apostolic letter Vita Consecrata , published on March 25, 1996, on the consecrated life and its mission in the Church and in the world . He also declared on January 6, 1997 that the Feast of the Presentation of the Lord should in future also be celebrated the annual day of consecrated life.