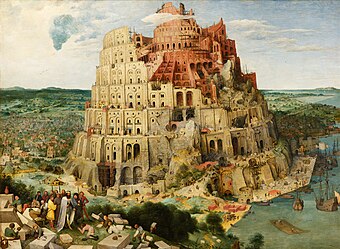 The Tower of Babel (here in a painting by Pieter Brueghel the Elder ) symbolizes the “Babylonian confusion of languages”.

Target direction of a planned language

The vocabulary is also often chosen with this aim in mind. So z. B. Stems of words chosen so that they are known to many learners. Further vocabulary in planned languages ​​is often systematically derived from others and therefore do not have to be learned separately.

World language refers to the spread; however, it can also be a non-planned language such as English, French or Spanish. The term universal language is mostly used for a logical ideal language in general and the characteristica universalis of Gottfried Wilhelm Leibniz in particular. Furthermore, any language can function as an auxiliary language . The older term Welthilfssprachen for planned languages ​​is hardly used anymore.

Artificial language can also refer to non-human languages, i.e. languages ​​that are not used for communication between people. Examples are the so-called “computer languages” ( programming languages ) such as Pascal or Java .

The syllables sol , re and sol in the name of the planned language Solresol .

In their aspects, planned languages ​​form the research subjects of interlinguistics . In the linguistic discussion, they are contrasted with the natural languages that have developed over a long period of time in the linguistic use of a language community .

A traditional division of the planned languages ​​uses the terms langues a priori and langues a posteriori . Detlev Blanke further subdivides:

Application and arguments from supporters

Only a few of the more than a thousand projects have achieved a certain level of awareness, sometimes only because of an original approach. Most are simplifications of existing national languages ​​or, in particular, offshoots of the most successful planned language, Esperanto (among them Ido as the best known). A special development is gestuno , a sign language.

So far, only Esperanto has developed into a language with a variety of functions, a long-term stable community of speakers and use in families (around a thousand native speakers). Ido and Interlingua did not follow this development to the same extent.

As a principle argument in favor of a planned language as a lingua franca , the natural scientist Wilhelm Ostwald pointed out in 1910 the consequences of the global dominance of a national language: by reading its books and newspapers everywhere, and understanding its communications, catalogs, and price lists of all kinds everywhere, so that no other people who have not completely lost the drive of self-preservation could consciously take such a step. Along with language, worldview, artistic and scientific thinking is passed on to others who use this language (...). "

Criticism of the idea of ​​a planned language

In addition, there were early doubts as to whether a planned language could prevail against the languages ​​of powerful states. This criticism is directed against the idealistic optimism that a morally justified claim is stronger than z. B. Economic interests. This criticism is borne out by the fact that people also learn “difficult” or “non-neutral” languages ​​if they believe they will benefit from them.

Reports on planned languages ​​in antiquity and the Middle Ages should be treated with caution. For example, the biblical prophet Zefaniah is sometimes quoted, according to which God promised a “purified language”. This is an inaccurate translation; correctly it must read: “pure lips” with which God can be called upon (Zef 3,9). Also other cited Bible passages like the Babylonian confusion of languages ​​(Gen 11, 1-9), the pouring out of the Holy Spirit at Pentecost (Act 2, 1-11) and Adam's distribution of names (Gen 2.19) are hardly in a meaningful connection with To bring planned languages.

The medieval mystic Hildegard von Bingen is said to have created a lingua ignota . Wim Manders, on the other hand, describes her creation as a mere vocabulary of nouns and a few adjectives for Hildegard's private use. The latino maccaronico of the late Middle Ages is also not a planned language, but a literary burlesque .

The Soviet esperantologist Ernest Dresen was one of the spreaders of such false interpretations, who wanted to give the history of planned languages ​​as old as possible ( Historio de mondolingvo , 1931). Often these misinterpretations are older, however, some go back to a lecture by Leopold Einstein in 1884.

It was not until the 17th century that scholars such as the aforementioned George Dalgarno and John Wilkins as well as Johann Amos Comenius , Athanasius Kircher and Gottfried Wilhelm Leibniz wrote statements on a “new” language. The focus of interest were the so-called a priori invented languages, which consisted primarily of digits and special characters and were not based on existing languages. However, due to their complex structure, such approaches were not practical. The second group of planned languages ​​is therefore based on natural - mainly Western European - languages; accordingly they are called a posteriori languages.

The first planned language with a greater degree of familiarity is likely to be Solresol in 1817 or 1856. But only Volapük received a noteworthy appendix , which was created in 1879/80 by the Baden prelate Johann Martin Schleyer . Very successful at first, the movement quickly collapsed because the language was relatively difficult to learn. The language name itself is composed of the English words world and to speak ; the roots of the word are therefore hardly recognizable from the original languages. In addition, Schleyer saw Volapük as his intellectual property that only he had at his disposal.

When Esperanto appeared in 1887, Volapük was at its peak or had already exceeded it. The disappointed Volapük supporters turned away from the planned languages ​​in general or mostly switched to Esperanto. In Esperanto, the European stems are much easier to recognize than in Volapük. Since 1900 at the latest, the Esperanto language community has consistently been the largest community of a planned language. By the First World War, Esperanto organizations were founded on all continents.

Apart from Esperanto, the so-called naturalistic direction was the most successful. Its followers strove for a planned language that was designed primarily on the example of the Romance languages. In 1903, for example, the Italian mathematician Giuseppe Peano proposed a simplified Latin, the Latino sine flexione , which was also called Interlingua . Occidental from 1922, which was later renamed Interlingue , was strongly oriented towards Western Europe .

The movements for the naturalistic projects like Latino sine flexione and Interlingua often merge into one another.

In 1907 Ido appeared as a partly a priori, partly naturalistic split from Esperanto. Since new suggestions for improvement came out at ever shorter intervals, the situation became so confusing for many interested parties that Ido also lost more and more followers, who then partly rejoined the Esperanto language community and partly other projects.

Phonetics professor Robert Eugen Zachrisson (1880–1937) from Uppsala University tried to introduce an international language with “Anglic” (a special form of English) in 1932, but this did not succeed.

National Socialism , Nationalism, and Communism restricted planned language activity in a dozen countries in various ways and for various reasons. National Socialism suspected a Jewish conspiracy in Esperanto, ended classes in public schools in 1933 and had the Esperanto associations and the Ido federation in Germany dissolved in 1936.

In the Soviet Union, hundreds or thousands of Esperanto functionaries and ordinary members - after years of using Esperanto in foreign propaganda - were arrested from 1937. The basis were orders in which "Esperantists" were listed next to stamp collectors. Some of those arrested were executed, while others spent a dozen or more years in camps for alleged foreign espionage. The state association of Soviet Esperantists (SEU) was referred to as an international espionage organization.

Most of the time, the regimes did not forbid private use; in the Soviet Union, however, even without an official ban, the use of Esperanto and membership in an Esperanto association was sufficient for arrest. In Germany, Esperanto speakers were occasionally interrogated, especially after foreign contacts.

Since the Second World War

Although Interlingua, published in 1951, quickly took precedence among the naturalistic projects, Esperanto remained by far the most widely used and propagated planned language. The attempts to advance Esperanto politically on an international level did not lead to Esperanto as a world language, despite small interim successes, such as the two positive UNESCO resolutions of 1954 and 1985. Even so, Esperanto is the only planned language that some children grow up with alongside another language; The number of Esperanto native speakers is estimated by Esperanto activists at 1000 to 2000; there are already fourth generation native Esperanto speakers.

Instead, English increasingly assumed the position of an international lingua franca : after the loss of France's colonies in the 1960s and despite its role in the process of European unification, French lost importance more and more quickly; after the collapse of the Eastern Bloc , Russian was less and less of a global competitor English. The simplified version of English, Basic English , was also given no space next to English.

The most famous and scientifically most important author of a planned language is probably the Danish linguist Rasmus Christian Rask , a co-founder of modern linguistics. His Linguaz Universale (1817) was only published from the estate in 1996 and has not influenced the discussion. Another well-known linguist is his compatriot Otto Jespersen , whose Novial has hardly found any followers.

Most of the authors of the more well-known planned language projects were academics: Zamenhof (Esperanto) was a doctor, Peano ( Latino sine flexione ) was a mathematician, several authors were theologians or clergy. Your linguistic knowledge - in part it was extreme polyglot like Schleyer - can usually be classified as pre-scientific.