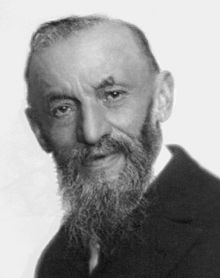 Giuseppe Peano (born August 27, 1858 in Spinetta, today part of Cuneo , Piedmont , † April 20, 1932 in Turin ) was an Italian mathematician . He worked in Turin and dealt with mathematical logic , with the axiomatics of natural numbers (development of the Peano axioms ) and with first-order differential equations . 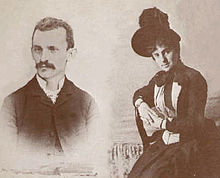 Peano was the son of farmers. He attended school in Cuneo and, when his talent was recognized, from 1870 the high school (Liceo) in Turin, where an uncle was a priest and lawyer. From 1876 he studied mathematics at the University of Turin with Enrico D'Ovidio , Angelo Genocchi , Francesco Faà di Bruno and Francesco Siacci, among others . In 1880 he received his doctorate and became an assistant to D'Ovidio and then to Genocchi. At the same time, his first mathematical work appeared in 1880. He gave the analysis lectures by Genocchi (which came out as a book in 1884, edited, written and supplemented by Peano). In 1884 he completed his habilitation. Besides the university he also gave lectures at the Military Academy in Turin. In 1890 he succeeded Genocchi as a professor at the university.

In 1891 he founded the journal Rivista di matematica , which was mainly devoted to the basics of mathematics and logic. In 1892 he began a project to formulate the well-known mathematical theorems with logical rigor, the Formulio Matematico (finished in 1908), which he later also used for his lectures, which became an educational failure. In 1901, therefore, his teaching at the military academy ended. At the university, however, you couldn't talk him into it. In 1900 Peano found recognition at the International Congress of Philosophy in Paris.

Peano as a mathematician 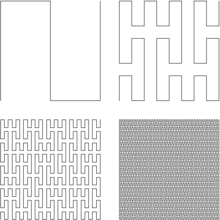 Four levels of a Peano curve

Peano's mathematical work is characterized by great logical rigor. He has repeatedly found exceptional cases in published theorems (for example, the work of Corrado Segre and Hermann Laurent ). The Peano curve named after him is an example of this. It is a continuous , surjective mapping of the unit interval into the unit square, i.e. a space-filling curve that is defined as the limit value of a sequence of curves that can be constructed step by step. Before Peano, the possibility of such a curve was not anticipated. Peano found the curves in 1890, and David Hilbert gave further examples a little later . He was also a pioneer of measure theory with Camille Jordan (and with a similar concept as Jordan) with his book from 1887 on the geometric applications of calculus, but only Émile Borel found a satisfactory concept of measure .

Peano had a formative influence on modern logic, set theory and mathematics through some works in which he pursued a consistent formalization of mathematical facts. In his book Calcolo Geometrico from 1888, Peano first created a system of axioms for vector space (taking up neglected ideas from Hermann Grassmann ) and there he also formulated the modern system of axioms for Boolean algebra , where he introduced the symbols and . In his Arithmetik of 1889 he established - independently of Dedekind's arithmetic - the first formal axioms for the natural numbers, which became famous as Peano axioms . As a foundation for his arithmetic, he created the first formalized class logic , in which he also introduced the element sign and ordered pairs (a, b). He later expanded the formalization of important logical and mathematical areas in formulas; among other things, the existential quantifier symbol comes from them .

In 1906 he gave a new proof of Cantor-Bernstein's theorem , which led to a dispute with Ernst Zermelo , who published a similar proof (published only in 1908). Richard Dedekind (1899 in a letter) had anticipated both , but did not publish it.

In 1897 he gave a plenary lecture at the first International Congress of Mathematicians in Zurich (Logica Matematica).

In 1899 Peano gave a counterexample , the Peano surface , to a conjecture about the existence of a local extremum of a function of two variables. 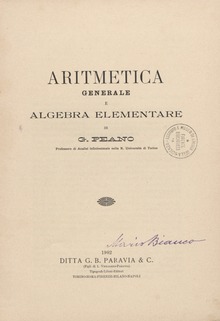 Peano as a linguist

Peano made a name for himself in the field of linguistics when he created the planned language Latino sine flexione (= Latin without inflection). This was an attempt to revive the former world language Latin by preserving the largely known vocabulary, but largely eliminating the difficulties of the Latin language. This Latino sine flexione later became part of Interlingua .