The son of the Braunschweig lawyer and university professor Julius Dedekind attended the Martino-Katharineum Braunschweig and studied mathematics at the Collegium Carolinum there from 1848 . He continued his studies from 1850 in Göttingen , where he received his doctorate from Carl Friedrich Gauß in 1852 as the last student on the theory of Euler's integrals after only four semesters. But he mainly heard mathematics from Moritz Abraham Stern and Georg Ulrich at the mathematical-physical seminar that Stern had just set up, and physics from Wilhelm Weber and Johann Benedict Listing . In the winter semester of 1850/51 he heard from Gauss about the method of the smallest squares , which Dedekind remembered as one of the most beautiful lectures he had ever heard, and in the following semester about higher geodesy. Since 1850 Dedekind belonged to the Brunsviga fraternity and held the office of secretary and treasurer there in the summer semester of 1852. In 1854 he also completed his habilitation in Göttingen, shortly after Bernhard Riemann , with whom he was friends.

After Gauss's death in 1855, Peter Gustav Dirichlet became his successor and became friends with Dedekind. Dedekind became a full professor at the Polytechnic in Zurich in 1858 and from 1862 until his retirement in 1894 was professor of mathematics in Braunschweig at the local technical university. From 1872 to 1875 he was its director. Although he received several offers at prestigious universities, he preferred to stay in his hometown of Braunschweig. One of the main reasons was the close bond with his family (he had a brother and a sister but was not married). Even after his retirement in 1894, he still gave occasional lectures. In 1859 he visited Berlin with Riemann, where he also met Leopold Kronecker , Ernst Eduard Kummer and Karl Weierstrass . In 1878 he visited Paris for the world exhibition.

Dedekind died on February 12, 1916 and was buried in the main cemetery in Braunschweig . His estate is kept by the Central Archives of German Mathematicians' bequests at the Lower Saxony State and University Library in Göttingen .

Dedekind played the cello and piano very well and composed a chamber opera for which his brother wrote the libretto.

Richard Dedekind gave in 1888 in the text What are and what are the numbers? the first exact introduction of natural numbers by axioms. In his work Continuity and Irrational Numbers from 1872 he gave the first exact definition of real numbers with the help of Dedekind cuts . In the appendix to the number theory of his teacher Dirichlet, he presented his structure of the ideal theory , which at the time was in competition with that of Leopold Kronecker . That was the famous Supplement X in the edition of Dirichlet's Number Theory of 1871, later called Supplement XI.

The Dedekind rings and also the Dedekind η function in the theory of modular forms , the Dedekind ζ function of an algebraic number field , the Dedekind complementary module , Dedekind number , Dedekind sums as well as the terms " Dedekind-infinite " and "Dedekind- are named after him. at last". Several mathematical theorems are called Dedekind's theorem . 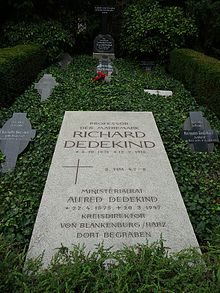 Grave in the Braunschweig main cemetery

Dedekind played an essential role in the elaboration of abstract algebra. The algebraic term ring was introduced by Dedekind, as well as unit and the concept of body. Dedekind was also a pioneer of group theory : in his lectures in 1855/56 he gave the first modern presentation of Galois theory (which was important in addition to transformation groups in geometry and number theory as the third root for the development of the group concept in the 19th century) Introduction of the abstract group concept as an automorphism group of body extensions. In 1897 he introduced commutators and commutator groups independently of George Abram Miller . The concept of the association also goes back to Dedekind (11th Supplement to Dirichlet's number theory 1894) and Ernst Schröder at the end of the 19th century, but initially went unnoticed.

He was in correspondence with Georg Cantor in the 1870s, which is important for the early history of Cantor's set theory . For example, in the context of this correspondence, Cantor developed his proof of the uncountability of real numbers (letter of December 7, 1873). The two of them met by chance in Switzerland in 1872. Their friendship ended after Dedekind refused to move to Cantor at the University of Halle. Dedekind had already calculated with sets in his algebraic work in the 1860s , without explicitly mentioning this, and used set theory in the development of his concept of the Dedekind cut (worked out as early as 1858 in lectures on analysis in Zurich).

He is depicted on a GDR postage stamp from 1981, the depiction of which is reminiscent of his sentence about the clear decomposition of ideals into prime ideals in the ring of whole numbers of an algebraic number field.

He edited both the posthumous writings of his teacher Dirichlet and those of his friend Bernhard Riemann, for whose collected works he also wrote a biography. He was also involved in the publication of the works of Carl Friedrich Gauß.

In his book What are and what should the numbers be? he wrote in 1888:

"What can be proven should not be believed in science without proof."

“The numbers are free creations of the human spirit, they serve as a means to grasp the difference of things more easily and more clearly. Only through the purely logical structure of numerical science and through the continuous numerical realm gained in it are we able to examine our ideas of space and time precisely by relating them to this numerical realm created in our mind. "