Amalie Emmy Noether ( Emmy was the nickname; born March 23, 1882 in Erlangen ; died April 14, 1935 in Bryn Mawr , Pennsylvania ) was a German mathematician who made fundamental contributions to abstract algebra and theoretical physics . In particular, Noether revolutionized the theory of rings , solids and algebras . The Noether theorem named after her indicates the connection between symmetries of physical laws of nature and conserved quantities .

Emmy Noether came from a Jewish family. Today a plaque in Erlanger Hauptstrasse reminds of the house where she was born. Her father Max Noether held a chair for mathematics at the University of Erlangen . Her younger brother, the mathematician Fritz Noether , fled from the National Socialists to the Soviet Union , where he was convicted and shot in the course of the Great Terror under Stalin for alleged anti-Soviet propaganda.

Emmy Noether showed no particular precociousness in mathematics, but was interested in music and dancing in her youth. She attended the municipal secondary school for girls - today's Marie-Therese-Gymnasium  - in Schillerstrasse in Erlangen. Mathematics was not taught intensively there. In April 1900 she passed the state examination to teach English and French at girls' schools in Ansbach . In 1903, she took the external Abitur examination at the Royal Realgymnasium - today's Willstätter-Gymnasium  - in Nuremberg .

1903 women were first at Bavarian universities to study approved, which also Emmy Noether, the enrollment at the University of Erlangen allowed. Before that she had already attended lectures at the University of Göttingen with the permission of individual professors , but had to return to Erlangen due to an illness . There she received her PhD in mathematics under Paul Gordan in 1907 . This made her the second German to receive a doctorate in mathematics at a German university. In 1908 she became a member of the Circolo Matematico di Palermo , in 1909 she joined the German Mathematicians Association .

In the same year she was called by Felix Klein and David Hilbert to the Georg-August-Universität Göttingen , because she was meanwhile a big name in the research field of differential invariants . At that time Göttingen was considered the leading mathematical center in the world. Encouraged by Klein and Hilbert, Noether applied for a habilitation in Göttingen on July 20, 1915 . The application was followed by intense controversial discussions in the faculty, in which many faculty members spoke out against women receiving a habilitation. Ultimately, however, Hilbert and Klein were able to prevail; Hilbert's statement in this connection that “a faculty is not a bathing establishment” became famous.

Since the habilitation of women at Prussian universities was prohibited by a decree of May 29, 1908, the mathematical and natural science department of the Philosophical Faculty of the University of Göttingen made an official application to the Prussian minister on November 26, 1915:

"Your Excellency
asks the mathematics and natural sciences department of the Philosophical Faculty of the Göttingen University respectfully, in the case of Miss Dr. Emmy Noether (for mathematics) to want to grant dispensation from the decree of May 29, 1908, according to which the habilitation of women is inadmissible. "

It was explicitly added that it was in no way about lifting the prohibition of habilitation for women, but only about a one-time exemption for “Miss. Dr. Noether ":

“Our motion does not aim to repeal the decree; we only ask for a dispensation for this unique case. "

“The admission of women to postdoctoral qualifications as private lecturers continues to meet considerable concerns in academic circles. Since the question can only be decided in principle, I am also unable to approve the admission of exceptions, even if certain hardships are unavoidable in individual cases. Should the fundamental position of the faculties, on which the decree of May 29, 1908 counts, change, I am ready to examine the question again. "

Emmy Noether then had no choice but to announce her lectures under the name of Hilbert, as his assistant she acted.

After the First World War and the collapse of the German Empire , there was a general legal improvement for women in the Weimar Republic . In addition to the right to vote , the habilitation regulations were also changed so that women could also be admitted to the habilitation. In 1919, Emmy Noether was the first woman in Germany to complete her habilitation in mathematics. She was also the first woman in Germany to receive a (non-civil) professorship. Nevertheless, she did not get an extraordinary professorship until 1922 and her first paid teaching position in 1923. She never received a full professorship, in contrast to her younger brother Fritz, who was less important in mathematics and became a full professor in 1922. Until the hyperinflation in the same year , she lived very frugally on an inheritance. In 1928/29 she took on a visiting professorship in Moscow , and in 1930 in Frankfurt am Main . When she returned from the Soviet Union, she made very positive comments about the situation there, which is why the National Socialists later assumed that she was a communist . Emmy Noether professed pacifism and was a member of the USPD from 1919 to 1922 , then of the SPD until 1924 . Together with Emil Artin , she received the Ackermann-Teubner Memorial Prize in 1932 for all of her scientific achievements. In 1932 she gave a plenary lecture at the International Congress of Mathematicians in Zurich (Hypercomplex systems and their relationships to commutative algebra and number theory).

1933 Emmy Noether was the so-called Law for the Restoration of the Professional Civil Service by the Nazi regime her teaching license revoked. She then emigrated to the USA. Before making this decision, she also considered going to Moscow. But the efforts of her friend there, the topologist Pavel Alexandrov , to obtain approval from the Soviet authorities dragged on for too long. Her former colleague from Göttingen, Hermann Weyl , helped her to find a job in the USA . In late 1933 she received a visiting professorship at Bryn Mawr Women's College in Pennsylvania . From 1934 Emmy Noether also gave lectures at the Institute for Advanced Study . There she influenced Oscar Zariski and probably Nathan Jacobson (and she also influenced Abraham Adrian Albert with her new approach to algebra ). She returned to Europe in 1934 and visited Emil Artin and her brother Fritz in Germany. Emmy Noether died on April 14, 1935 of complications from an abdominal operation that had become necessary because of a tumor. She found her final resting place under the cloister of the M. Carey Thomas Library on the campus of Bryn Mawr College . 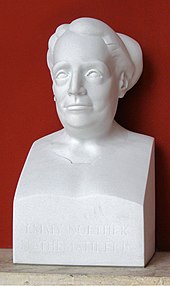 Bust in the Hall of Fame in Munich

Emmy Noether is one of the founders of modern algebra . Her mathematical profile developed in collaboration and discussions with Professor Paul Gordan from Erlangen , who also became her doctoral supervisor. He was often called the "King of the Invariants". The invariant theory occupied Emmy Noether until 1919.

Deviating from Gordan's main interests, Noether turned to dealing with abstract algebraic methods. Gordan had commented on Hilbert's proof of his basic theorem, which generalized many of Gordan's results, but was a pure proof of existence, by saying that this was not mathematics but theology.

From 1920 she shifted her research focus to the general ideal theory . She founded her own school in Göttingen: since the mid-1920s she found a number of highly talented students from all over the world who gathered around her. She called her students her "Trabanten" or the "Noether-Knaben". Her doctoral students include Grete Hermann , Jakob Levitzki , Max Deuring , Ernst Witt , whose official supervisor was Herglotz , Heinrich Grell , Chiungtze Tsen , Hans Fitting , Otto Schilling and her student group Bartel Leendert van der Waerden . Other prominent algebraists in Germany associated with the school were Emil Artin, Helmut Hasse (with whom she proved the important Brauer-Hasse-Noether theorem in the theory of algebras) and Wolfgang Krull .

In Göttingen, then the world center for mathematical research, she built her own mathematical school. Van der Waerden wrote in his famous two-volume Algebrawerk ( Modern Algebra ) that it also built on lectures by Emil Artin and Emmy Noether. Noether is also assigned a decisive role in the implementation of abstract algebraic methods in topology , almost exclusively through oral contributions, for example in Heinz Hopf's lectures in 1926/27 in Göttingen and in her own lectures around 1925. This also influenced the topologist Pawel Sergejewitsch Alexandrow , who visited Göttingen.

She also achieved extraordinary results in theoretical physics and in 1918, with the Noether theorem, laid the foundation for a new way of looking at conserved quantities . 50 years after her death, in the last quarter of the 20th century, Noether's theorem developed into one of the most important foundations of modern physics.

The following mathematical structures and sentences are named after Emmy Noether:

In July 2020, the student parliament of the Georg-August University of Göttingen voted for this to be renamed the Emmy Noether University.