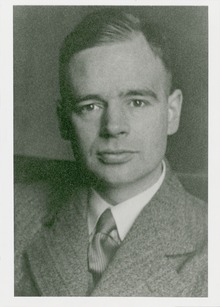 Van der Waerden was born as the son of the civil engineering and mathematics teacher Theodorus van der Waerden and Dorothea Adriana Endt. He showed a mathematical talent relatively early on. In 1919 he began studying mathematics in Amsterdam. He heard from Gerrit Mannoury , Roland Weitzenböck , Luitzen Egbertus Jan Brouwer and Hendrik de Vries , passed his doctoral examination in 1924 and received his doctorate in 1926 from de Vries in Amsterdam on the fundamentals of counting geometry (Schubert calculus) (De algebraise grondslagen der meetkunde van het aantal). In between, van der Waerden was in Göttingen from 1924 , where he heard from Emmy Noether (algebra), from Hellmuth Kneser (topology) and mathematical methods of physics from Richard Courant (based on the textbook by Courant-Hilbert).

After completing his doctorate in 1926, he spent a year in Hamburg (where he heard from Emil Artin , Otto Schreier and Erich Hecke ) and completed his habilitation in Göttingen in 1927, where he was Richard Courant's assistant . In the winter semester of 1927/28 he gave his first lecture on ideal theory in Göttingen. At that time he was interested in an exact justification of algebraic geometry with methods of modern algebra, which became his main field of work. In algebraic geometry there was an abundance of beautiful geometric results, but they were not strictly proven (for example in Schubert's counting calculus or in the work of the Italian school around Francesco Severi , Guido Castelnuovo , Federigo Enriques ). Other mathematicians also worked on it in competition with van der Waerden, for example André Weil in the 1940s and Oscar Zariski in the USA , whose work later eclipsed that of van der Waerden, much to his chagrin.

In 1928 he became a professor in Groningen . In 1929 he married Camilla Rellich, the sister of Franz Rellich , whom he knew from Göttingen and with whom he had three children. In Groningen he worked on his well-known algebra textbook, which arose from lectures by Artin and Emmy Noether and the first volume of which was first published in 1930. From 1931 to 1945 he was professor at the Mathematical Institute of the University of Leipzig and its director. The simultaneous presence of Werner Heisenberg and an interest in quantum mechanics had drawn him there. The book The Group Theoretical Method in Quantum Mechanics emerged from joint seminars. In the 1940s he ran into difficulties in Germany because he did not want to give up his Dutch citizenship . During the German occupation in 1942, his mother committed suicide in the Netherlands (his father died of cancer in 1940). During the heavy bombing raids on Leipzig, he and his family temporarily moved to Dresden and the surrounding area and shortly before the end of the war to Austria. In 1945 he went back to Amsterdam. On the mediation of Hans Freudenthal, he worked for Shell in The Hague and, from its establishment in 1946, also at the Mathematisch Centrum in Amsterdam, where he represented applied mathematics. In 1947/8 he went to the American Johns Hopkins University , where he turned down a professorship (and instead mediated his student Wei-Liang Chow ), and from 1948 was an associate professor and from 1950 a full professor at the University of Amsterdam, although Brouwer tried to prevent this. He turned down an appointment to Göttingen in 1949, as well as other appointments, but used them to improve his position in Amsterdam. In 1951 he went to the University of Zurich , where Rudolf Fueter's chair had become vacant, and taught there until his retirement in 1972. However, he remained scientifically active as a mathematics historian.

He became famous for his two-volume textbook on algebra , the first edition of which appeared in 1930 under the title Modern Algebra and is based on the lectures of Emil Artin and Emmy Noether . As the first textbook, it consistently carried out the change in algebra that took place in the early 20th century away from concrete computing techniques towards the investigation of abstract structures. This made it an influential reference work for many decades.

In a long series of articles in the Mathematische Annalen he tried to put the Algebraic Geometry of the Italian School around Francesco Severi , Federigo Enriques and others and the “Counting Calculus” by Hermann Schubert on a strict, purely algebraic basis, but was here by André Weil et al. obsolete ".

He also dealt with the application of elementary geometry, the axioms of geometry, statistics, topology, number theory and others, so that one can call him one of the last generalists of mathematics. At the same time as Ernst Witt et al. He gave a geometric description of the classification of Lie algebras . The rate of Van der Waerden is an important set of Ramsey theory , an area of combinatorics .

In 1953, together with Kurt Schütte , he proved the kiss number problem in three dimensions, that a central sphere can touch a maximum of twelve other spheres of the same size. Isaac Newton had already suspected this , while David Gregory said it was 13.

He was also a leading historian of science, particularly concerned with ancient Greek mathematics (and beyond to India) and astronomy and the history of algebra.