Golden Earring is a rock band from the Netherlands founded in 1961 and one of the longest established rock bands in the world.

1961 in The Hague as "The Tornadoes" by George Kooymans (born March 11, 1948 in The Hague) and Rinus Gerritsen (born August 9, 1946 in The Hague), just 13 and 15 years old, the band name was changed in September 1962 because of the success of the English band of the same name, The Tornados . After a song by Marlene Dietrich from 1948, they were initially called "The Golden Earrings", later simply "Golden Earring".

Their first LP Just Earrings brought the breakthrough in 1965. It contained three top 10 hits, including the top 2 hit That Day . Winter-Harvest , released just a year later, brought three more hits . Musically, the band orientated itself in the early years on the " British Invasion ". They wrote their own songs, the main songwriter was Kooymans together with Gerritsen.

Before the third album there were some major changes. The singer, guitarist and flautist Barry Hay (born August 16, 1948 in India) joined the group in 1967 and replaced lead singer Frans Krassenburg. Guitarist Peter de Ronde left the band. Stylistically, Miracle Mirror followed the trend towards psychedelic rock . The Golden Earrings were able to increase their success even more. With the song Dong-Dong-Di-Ki-Di-Gi-Dong , released without an album, they had their first number one hit in 1968 . The expression of this period is a 19-minute version of the Byrds song Eight Miles High , one of their few cover songs, which is included on the album of the same name along with five of their own songs.

The following years brought some changes again. Founding drummer Jaap Eggermont left the band - he later became an internationally successful producer. In 1970 Cesar Zuiderwijk (born July 18, 1948 in The Hague), the drummer and percussionist of "Livin Blues", switched to Golden Earring . With Kooymans, Gerritsen, Hay and Zuiderwijk the band had found their final line-up and next to Kooymans Hay became the most important songwriter. The band name lost the "s" at the end and so the album, released in 1970, was called after the new band name Golden Earring . It was a number one album and featured their second number one hit, Back Home . For the first time with this song they also had a chart hit in neighboring Germany and in Switzerland they reached number 6. After psychedelic rock had passed its peak, the Dutch oriented themselves with this album in the direction of progressive and hard rock and continued this development and continued international success with the albums Seven Tears and Together . In 1972 they were invited by The Who to support their European tour. The label, to which The Who were under contract, also helped the band to gain attention beyond the European continent. 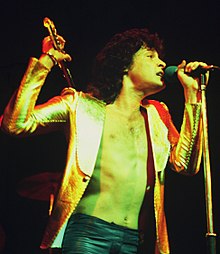 The climax of this development and the greatest success in Golden Earring's career was the 1973 album Moontan . The hit Radar Love made her known worldwide. The song, written jointly by George Kooymans and Barry Hay, not only came in at number 5 in Germany and at number 7 in Great Britain, it was also released in the USA and reached number 13 on the Hot 100 . The album sold over half a million times there and came in at number 12. For the Doobie Brothers and Santana , they were hired as the opening act for US tours. The success did not make them international stars, but it was lasting and brought them three more placements in the lower half of the US album charts with the following albums. During this time the band experimented with hard and progressive rock and also tried their hand at art rock . They also tried to expand the line-up at times with keyboardist Robert Jan Stips from Supersister and with Eelco Gelling as the second guitarist.

The second half of the 1970s were characterized by the band's live performances. Golden Earring established itself as a coveted live band, which was particularly popular in the USA with its extroverted stage show and gaudy solos aimed at great effect . As early as 1969, Golden Earring was the first major European band to tour the United States. By 1984 they toured 13 times for at least three months and played in over 40 countries. Bands like KISS and Aerosmith performed in their opening act . With musicians like Santana , Led Zeppelin , the Doobie Brothers , Eric Clapton , Pink Floyd and The Who they had joint appearances or tours.

The two live albums Live and 2nd Live were particularly successful during this period . Although they teamed up with US producer Jimmy Iovine on their studio album Grab It for a Second , international interest in the band waned. However, he gave them a more pop-oriented style, which they retained on their next studio albums. Overall, the albums weren't as successful as in previous years and Weekend Love was the only top 10 hit in 1979.

It wasn't until 1982 that Golden Earring reached a second peak. Thanks to the music channel MTV , which was having its breakthrough at the time, the song Twilight Zone became a top 10 hit in the US and thus their biggest hit there. In her homeland, it was the fourth of her five number one hits. The associated album Cut also reached number 1 and number 24 in the US charts. The subsequent number one album NEWS with the number one hit When the Lady Smiles was able to make it to the US, as did the two following albums - Place charts. After that, however, at the end of the 1980s, the band's great international successes finally ended.

In 1991 the album Bloody Buccaneers was released , which reached number 3 as did the single Going to the Run . This made them a top band in the Netherlands for the fourth decade in a row. The following year, The Naked Truth began another successful series with live albums. The album, recorded during a performance in Amsterdam, reached number 2 in the charts and remained in the Dutch album charts, which has now expanded to the Top 100, for more than two years, making it one of the most successful albums of recent times in their homeland. With Naked II (1997) and Naked III (2005) and two expanded versions of The Naked Truth as well as Last Blast of the Century at the turn of the century, the band was successful with live recordings into the 2000s.

Overall, Golden Earring's album releases decreased significantly in the 2000s. In particular, it took eight years before another album with their own studio productions was released in 1999 with Paradise in Distress . In 2003 Millbrook USA was released, which was recorded in the town of the same name in the US state of New York and reached number 2 on the album charts. Nine years later, the last studio album to date, Tits' n Ass , was released, which was the band's ninth number one album since 1969. This means that the Dutch have had at least one top 5 album for the sixth decade in a row. They had placed their hits in the top 40 single charts for five decades in a row.

Today Golden Earring, who are a year older than the Rolling Stones , perform mainly in the Netherlands or at European festivals, for example in 2006 at the Tollwood Festival in Munich and in December 2006 in Basel . To celebrate its 45th anniversary, a 350-page book was published in LP format in 2005. In 2007 Golden Earring played for the second time in the Rockpalast of the WDR in Cologne , on March 21, 2009 in Hamburg and on February 6, 2010 in Bocholt in a sold-out hall. In June 2012 they had a guest appearance at the concert series "Groots met een zachte G" by Guus Meeuwis in the Philips Stadium in Eindhoven. As part of their 2013 tour, they gave their only concert in Germany on October 26, 2013 in the Euregium Hall in Nordhorn, Lower Saxony .

The composer couple Kooymans / Hay founded their own record label with Ring Records and developed into producers . They wrote and produced some songs for other performers, such as the jazz pianist Jasper van't Hof or Anouk .

Radar Love is considered a rock classic . The band White Lion had a chart hit in the US charts in 1989. There are also numerous other cover versions. As a tribute to the band, the song is also played by musicians like U2 at their concerts in the Netherlands. In 2005, Radar Love was voted the truckers' favorite song in England and the United States and was a favorite with The Washington Post readers .

Their song Kill Me (Çe soir) was covered by the British metal band Iron Maiden for the single B-side of Holy Smoke and reached number 3 in the British charts.

Golden Earring had 39 albums in the Dutch charts as of 1969 (no chart data is available before 1969), 30 of which were also in the top ten. Up to 2012, the band was number one nine times. For six decades in a row they had at least one album in the top 4. Eight albums by the Dutch also made it into the US charts .

Golden Earring was able to place 47 songs in the Nederlandse Top 40 , 27 songs reached the top 10, including five number one hits. For five decades in a row, the band had at least one chart hit. Ten songs were also placed internationally in the USA, England or German-speaking countries.