Carlos Augusto Santana Alves (* 20th July 1947 in Autlán de Navarro , Jalisco , Mexico ) is an American guitarist of Mexican origin, through his music direction of the skirt Latin to rock music has expanded to include a variant.

On the Santana tour 1978, in the Groenenoordhallen in Leiden

Carlos Santana received violin lessons from his father at the age of four . In 1955, with the advent of rock 'n' roll , he switched to the guitar. In the same year his family moved to Tijuana , where Carlos Santana played in various clubs.

In 1960 his family moved to San Francisco . Carlos only followed a year later and earned his living in striptease clubs. His role models were among others Gábor Szabó , Bola Sete and Wes Montgomery . When he arrived in San Francisco, he soon met like-minded people and founded the Santana Blues Band in 1965 with Gregg Rolie , Gus Rodriguez, Michael Carabello and Danny Haro . Allegedly, the name was only chosen because the local musicians' union demanded that every band should have a head. Santana was also naturalized in 1965. The band quickly became known in and around San Francisco for their distinctive style, a mixture of rock 'n' roll, blues and Latin American rhythms. They created Latin rock with it .

At the end of September 1968, Santana was invited to the Live Adventures of Al Kooper at Fillmore West on the last evening as a replacement for the sick Mike Bloomfield . With the title Sonny Boy Williamson (Jack Bruce / Paul Jones) Santana's guitar playing was documented live for the first time.

In 1969 the first LP Santana was recorded. The band, which had grown into a sextet , then toured the United States, where they were best known for their appearance at the Woodstock Festival in August . Her very expressive piece Soul Sacrifice was later selected for the Woodstock film . In the same month the debut album was released, which made it into the top 5 of the US album charts, in which it could hold for over two years; it has been sold over two million times. It also includes the top 40 single Jingo (a cover version of a 1959 Nigerian piece recorded by Babatunde Olatunji ) and the top 10 single Evil Ways .

The band's second album, Abraxas (from September 1970), contains the classics Samba Pa Ti , Oye Como Va (by Tito Puente ) (Top 10) and Black Magic Woman (by Peter Green ) (Top 5). This album, which eventually sold 4 million copies, topped the charts. At the end of the year the band was expanded to a septet by the young guitarist Neal Schon (* 1954) .

In September 1971 Santana III was released, on which many guest musicians, such as. B. the percussionist Coke Escovedo , who plays along with all the songs, can be heard. With two million copies sold, this work also reached the top of the charts. The top 10 single Everybody's Everything and the top 20 single No One to Depend On were released . After the tour that accompanied the release of the album, the band separated. Carlos Santana kept the right to the band name.

In 1972, after a tour with Buddy Miles, he released a live album and reunited the band to record the fourth album, Caravanserai . From the old line-up, Shrieve, Areas, Rolie and Schon were there; the latter two left the band the following year to form Journey . The album was released in September, reached the top 5, went platinum and was nominated for a Grammy .

In 1972, Santana developed an interest in guitarist John McLaughlin's fusion band Mahavishnu Orchestra . This introduced him to his guru Sri Chinmoy , who accepted him as a disciple in 1973. Santana was given the name Devadip , which means "lamp, light and eye of God". Santana and McLaughlin recorded Love, Devotion, Surrender with members of the Santana Band and the Mahavishnu Orchestra, enhanced by percussionist Don Alias and organist Larry Young , who both played on Miles Davis ' classic Bitches Brew in 1969 .

More albums followed, but also new members in the band.

In spring 1987 the Santana Band performed together with Buddy Miles with their Freedom concert (title of the album of the same name) in the Palast der Republik in East Berlin , where they were euphorically celebrated. The fans (mostly from the blueser or customer scene ) had to queue up 48 hours in advance to get one of the few freely available tickets. Two thirds of the tickets were reserved for citizens close to the state.

Over time, the band did not succeed, as did Carlos Santana's solo ambitions. Nevertheless, he remained a sought-after guest musician. In 1989 he received his first Grammy for the album Blues for Salvador .

On April 20, 1997, Santana performed live on stage at the Event Center Arena in San José (California) on Prince 's Love-4-One-Another-Charities-Tour . In 1998 Carlos Santana was inducted into the Rock and Roll Hall of Fame with other bandmates .

In 1999 he made a comeback with his band . The album Supernatural became a worldwide success and Santana received eight awards at the Grammy Awards in 2000, something that only Michael Jackson had achieved with Thriller in 1984 . After that, Santana received numerous other music awards as a band leader and solo artist. Rob Thomas ( matchbox twenty ), Wyclef Jean , Eagle-Eye Cherry , Everlast , Maná , Lauryn Hill , Dave Matthews and Eric Clapton have worked on Supernatural . This was followed in 2002 by the album Shaman , on which POD , Seal , Dido and Michelle Branch and the opera star Placido Domingo can be heard as guest musicians. 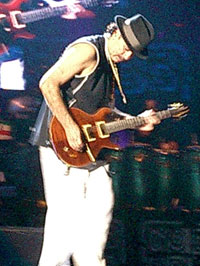 Santana 2003 at a concert in Barcelona

All That I Am was released on October 28, 2005 with musicians like Steven Tyler ( Aerosmith ), Big Boi ( OutKast ), Mary J. Blige , will.i.am , Los Lonely Boys , Sean Paul , Joss Stone , Kirk Hammett ( Metallica ), Robert Randolph and The Wreckers . The first single, Just Feel Better (feat. Steven Tyler), was written by Damon Johnson, currently guitarist for Alice Cooper and frontman of the band Slave To The System . Santana presented this song live in Germany on November 6, 2005 in the Saturday evening show Wetten, dass ..? in front. Instead of Steven Tyler , the singer of the US hard rock band Silvertide , Walt Lafty, took over the vocal part.

On the 2006 European tour, Carlos Santana was accompanied by his son Salvador Santana and his group. In July 2006, when the 40th anniversary of the jazz festival was celebrated in Montreux, Carlos Santana and his band hosted three evenings and presented themed trips into the blues (My Blues is deep) and African music (Beat of my drum) and an evening in which Tower of Power , Beverley Knight , Herbie Hancock and many other artists participated.

Santana prefers electric guitars with two pickups. It used to be Gibson SG with P90 pickups, as can also be seen on the recordings of his first album, later he played a Yamaha SG 2000 and a Yamaha PF3000, and he can also be seen on concert recordings with a Fender Stratocaster . In 1981 he came across PRS . Paul Smith built a model for him according to his specifications, which has already gone through four versions to date. The guitars have a slightly shorter scale length of 24.5 inches instead of the 25 inches customary at PRS and are available to everyone as a custom model from PRS.

As an amplifier he uses an old Mesa Boogie Mark 1 Red Head , two Dumble Overdrives and a Dumble Steel String, all of which are tube amplifiers . He also uses two 12-inch and two 4 × 12-inch boxes from Mesa Boogie .

Santana plays both with her fingers and with a pick (even within a piece). This can be seen and heard very well in the piece Samba pa ti .

“Music should express eternity, infinity, immortality. It comes from a higher level of consciousness. It is certainly not show business or entertainment. "

Between 1973 and 1982 Santana joined the Indian guru Sri Chinmoy on a spiritual quest and found his life motto here: We are all one .

Together they had also been involved in the social field for decades . In the mid-1990s, they set up the Milagro Foundation, a non-profit foundation that works to ensure that disadvantaged people receive an education. They have received numerous honors for their commitment. For example, the San Francisco city ​​council made June 6th, 1987, Santana Day .

On July 9, 2010, Santana proposed marriage to Cindy Blackman at a concert on his Universal Tone Tour in Chicago . The wedding took place on December 21st in Maui .